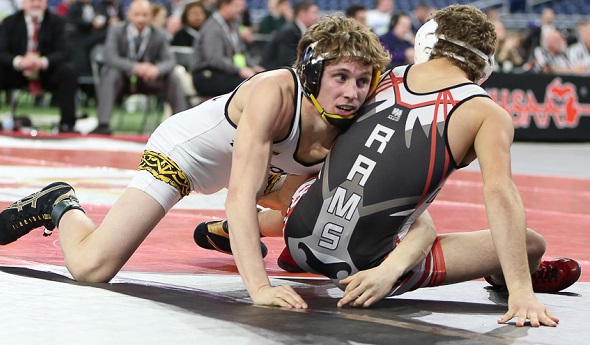 Greer capped his high school wrestling career Saturday at Ford Field with a third Division 3 championship, winning a 9-2 decision over Montrose’s Reese Wallis in the title match to finish this season 43-2 and earn the Michigan Army National Guard “Performance of the Week.”

The champion at 119 as a junior and 103 as a freshman, Greer finished 174-6 for his career with 86 pins, and despite missing the end of his sophomore season. He injured his thumb late that winter, and despite making the attempt at his Individual District tournament, was unable to continue competing. That ended up taking him out of the running for four individual titles, but still left him among the elite who have wrestled in this state.

Greer followed the influence of cousins Dillen and Darren Decker into the sport – the 2015 Carson City-Crystal graduates both were MHSAA finalists for the Eagles, and Dillen was a champion as a senior before both went on to wrestle at Heidelberg University in Ohio. Greer also plays baseball – pitcher and centerfield – and is considering a variety of college options and opportunities to continue wrestling at that level. If he doesn’t wrestle, he’s leaning toward Ferris State University; regardless of where he’s headed next, Greer would like to study forestry, criminal justice to become a conservation officer, or heating and cooling.

Coach Corey Renner said: “Dakota told me about when he was a youth wrestler, getting beat by the same kids all the time, until one year he ‘decided not to lose anymore.’ So he started working harder, trying to learn more, etc., and his ability took off from there. Dakota has practiced so much that his moves just seem to happen without a lot of conscious thought, more like a reflex. He is also very good at reading his opponent and finding weaknesses in a short amount of time. … Dakota seems to be able to see things from a coach’s point of view, and he is good at helping get other kids to buy into what we are trying to do. Dakota doesn't ever expect anything; he knows that success is earned every day and that past success doesn't guarantee anything or allow you any "slack.”  I think that when Dakota had the injury his sophomore year, he approached it with the same attitude as when he was a little kid – just work hard and do all the things that helped lead to success before to try to get back to where he was.”

Performance Point: “It was more of a relief than anything to finally get it done,” Greer said of winning the third title. “All the things leading up to it, all the work. Getting the two before, you’re kinda expected to win it, so it’s nice to get out there and get it done. … Coming into my freshman year, I wasn’t sure how good I would be or what I could become. What I’ve done is what I’ve dreamed of doing, but I didn’t know if I could or not. After I got the first one, I knew I was capable of it. It was just a matter of making it happen.”

On the attack: “I started to see a lot of cases where kids were coming at me with a bunch of weird, different techniques defending my offense. This year I was focusing on how to still attack and find out ways to get around that. If they’re going to block one thing, find another way to attack.”

No regret: “(Missing the 2016 Finals) doesn’t bother me too much. I can’t worry about things like that. I’m not going to sit here and say I would’ve done something; you never know unless you do it. It was a very tough bracket that year – any of those kids could’ve beaten me. … (But) I think it was a huge part of me coming back as strong as I did. It drove me.”

Gotta get outside: “I just love everything about it. I love nature, being outside, all the great things and activities. (This fall) I got a couple deer. This whole winter, I run hunting dogs, beagles, so I raise and train them and hunt rabbits with those. I have my own fishing boat, and I do bow fishing and bass fishing and all that stuff during the summer. It’s basically my whole life besides wrestling and school.”