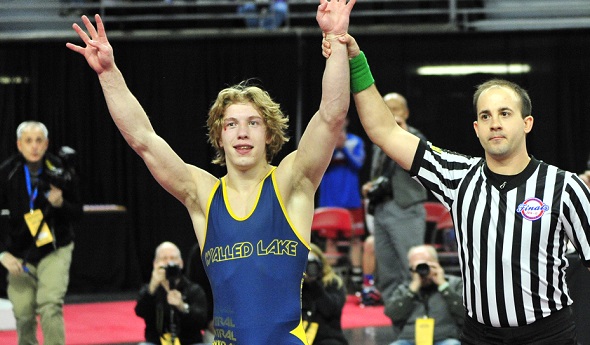 Freeman joined one of the elite groups of individual champions in any MHSAA sport Saturday when he defeated Birmingham Groves’ Colin Takata by technical fall, 24-7, to win the Division 1 championship at 140 pounds – and become the 22nd wrestler in MHSAA history to finish his career with four Individual Finals titles. In doing so, Freeman also capped a 34-0 season and 167-0 career in earning the Michigan Army National Guard “Performance of the Week.”

His previous three championships came at 103 pounds in 2014, followed by a 125-pound title and then the win at 135 last winter. He won every event he entered over four seasons but one; as a freshman he was injured in a semifinal victory at a tournament and was unable to take the mat for the championship match. As a senior he had 28 wins by either tech fall or fall despite getting a slow start to this season after a broken ankle kept him off the mat until January. Although he had only a few close calls at the high school level, he’s taken his losses in national competition – but had plenty of success there as well, earning multiple All-America honors while winning a USA Wrestling folkstyle national title, finishing USA Wrestling freestyle and FloNationals runner-up and third at USA Wrestling Greco-Roman Nationals.

Freeman was coached during high school by his father, Al Freeman (who wrestled collegiately at University of Nebraska), and also watched closely the match right before his at The Palace of Auburn Hills last weekend as his junior brother Nick won his first title, at 135 pounds. Ben carries a 3.6 grade-point average and will continue his academic and wrestling careers at University of Michigan.

Coach (and Dad) Al Freeman said: “He works hard at it of course, like all serious athletes do. He might get an edge because he’s always been a student of the sport. His matches are live practicing for him, where he attempts to execute techniques and strategies to score as many points as possible. He has won many matches where he came off the mat very disappointed in himself because this or that technique didn’t work well enough. I think that he is one of the best. But I think there are many others whose records aren’t as stellar who are also up there with the best. Mis-timed injuries, illness, etc. can derail any of us no matter how good we are. Ben’s experienced this at some national tournaments. In fact, at this year’s state tournament he got sick the day before. Luckily being the last weight class on Thursday gave him just enough time to recover enough to perform. You need both a lot of preparation and a little luck at the top level.”

Performance Point: "During the season, I couldn't really think about all of that (four-title talk)," Ben Freeman said. "If I started thinking about that stuff, I thought I might psych myself out. So I tried to take each tournament one at a time, not look too far ahead. I definitely thought about (missing out on a fourth title). Obviously that crosses your mind. It happens to a lot of people who are dominant for three years, and the fourth year they lose to someone no one thought they would. I tried to keep that in mind and not underestimate anyone so that wouldn't happen." 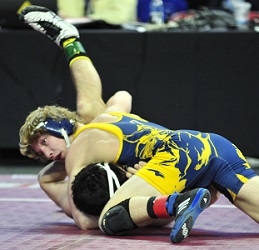 No. 22: "It doesn't even seem real. I look up to all of those guys; I can't picture myself being part of that group (of four-time winners). Right after ... there were just so many emotions. I didn't even know what to think. Now that it's a week later, it's setting in. I'm sure the more time that goes by, and just realizing it, it's going to set in more."

Brotherly love: "It was super cool. I'm really proud of him. I know he deserves it. I know he could've won as a freshman, could've won last year too, but things don't always work out. I'm happy he finally got over that hump. I'm sure it's a lot of relief off his chest, and it makes it easier for him to (win again) next year."

Coach Dad: "Sometimes it was tough, especially when I was little, and obviously it's really tough for him to change hats and go between being Coach and being Dad. Obviously it's two different roles, but we've worked it out pretty good. I know at practice I have to treat him like Coach, and at home he's my dad. It's tough, but there are a lot of positives to it too. He's just around all the time. If I ever have any questions, I can ask him ... and get a lot quicker responses."

State of wrestling: "My favorite part is everyone (in Michigan) kinda knows each other. I've met a lot of great people all over the state, just practicing and going to tournaments with them. All the wrestlers I've found are really great people. I'm not sure if it's because they're like me, or just great people in general, but I've made a lot of close friendships through it, all over Michigan."

PHOTOS: (Top) Walled Lake Central's Ben Freeman on Saturday has his arm raised for the fourth time at an MHSAA Individual Finals. (Middle) Freeman attempts to pin Groves' Colin Takata during their championship match. (Click to see more at HighSchoolSportsScene.com.)