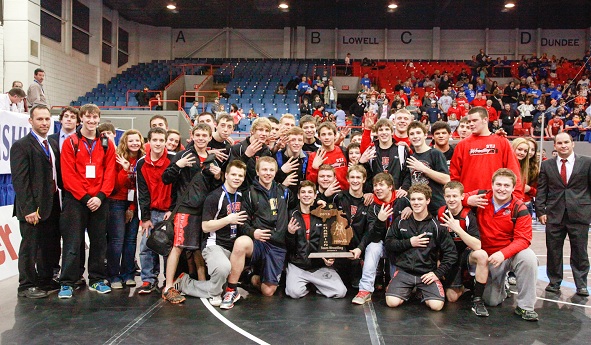 BATTLE CREEK – St. Johns’ seniors heard most of it and read the rest over the last year.

Those last three MHSAA team wrestling championships simply were the product of an incredible senior class that had combined for six individual championships. Throw in a new coach this winter, and the Redwings would fall off their roost as the dominant program in Division 2.

But these seniors – including five who will wrestle in the Big Ten next season – knew better.

“Of course we did. This is the same group of guys who just keep working hard, keep going after it,” St. Johns senior Josh Pennell said. “Just because one grade moves out, that doesn't mean we (don’t) have kids from underneath moving in and replacing those kids."

With 2012 graduates Taylor Massa and Jordan Wohlfert looking on – as fans, this time – the teammates they left behind finished a run achieved by only three schools before.

Top-seeded St. Johns defeated Lowell in the Division 2 Final at Kellogg Arena on Saturday, 42-20, to become the fourth school to win four straight MHSAA team wrestling titles since the beginning of the Team Finals format in 1988.

“We proved that it just wasn't a fluke, one grade that just could do everything,” Pennell said. “The truth is we've got what it takes to win state championships, if we work as a team to win.”

Pennell and senior Jacob Schmitt started in all four championship match wins during this run, and senior Brant Schafer no doubt would've done the same had an injury not ended his season earlier this winter.

Total, this senior class finished with a 115-8 dual meet record.

By numbers alone, this season’s 22-4 finish was the least impressive of their run. But those losses this winter came to eventual Division 1 championship Detroit Catholic Central – which St. Johns also then beat – plus ranked Division 1 Brighton and Division 2 Fowlerville, and Ohio powerhouse Lakewood St. Edward.

The only other teams to win at least four straight titles during the Team Finals era were Davison from 2002-06, Hudson – which joined Davison as the only two with five straight by winning Division 4 on Saturday – and Dundee from 1995-98.

“These guys, they have moxie. They've got attitude. They want to be here and all that stuff,” said St. Johns coach Derek Phillips, who took over the program this winter after seven seasons as an assistant.

“I had a bond with these kids. I’d been with them for all four (titles), and winning breeds winning. They wanted it, and they were going to do everything they could to get those Ws.”

The Red Arrows, which entered the weekend as the second seed, finished 19-7. But there’s no reason to think they won’t be back at Kellogg Arena again in 2014 – although they started three seniors in the championship match, they also started five freshmen.

“They fought today. I’m proud of my team” Lowell coach Dave Dean said. “This is a very young team, so we’re building on a really good foundation."

Lowell will have nine qualifiers at next weekend’s Individual Finals at The Palace of Auburn Hills, and St. Johns will send 11. The Redwings' senior class certainly will be remembered among the most impressive in Michigan in some time, regardless of what happens next weekend. Whitford and Hayden have signed with the University of Michigan, Pennell with Michigan State, Schmitt with Northwestern and Schafer with Indiana.