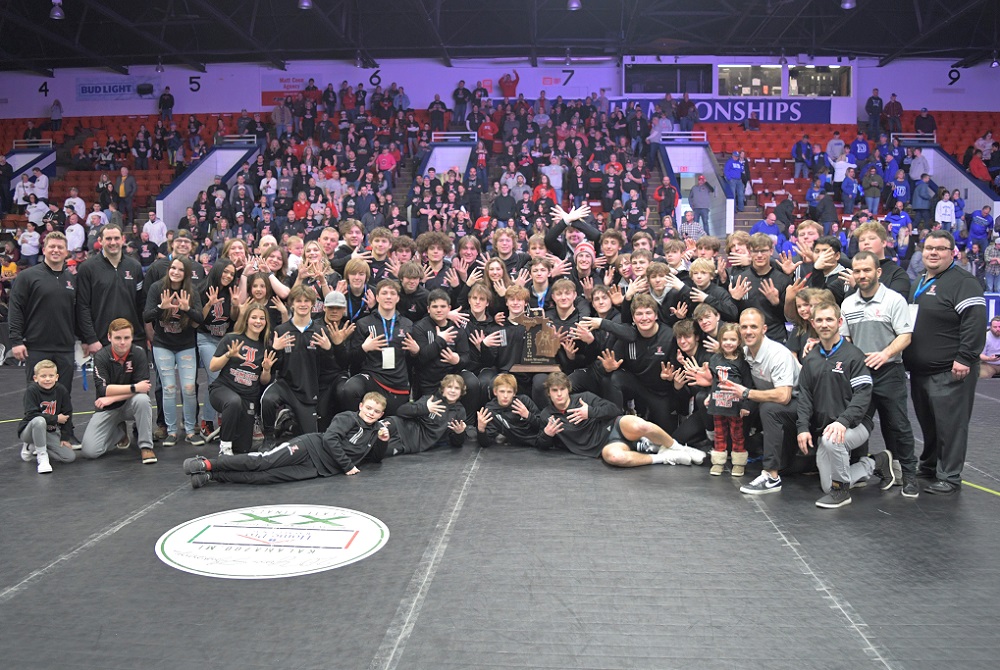 KALAMAZOO -- When asked about his team's unprecedented success, Lowell wrestling coach RJ Boudro admits that the recipe for success is not that hard.

It's all about family.

Boudro's Red Arrows won their ninth straight Division 2 championship, and 12th overall, by defeating Goodrich in the 46-16 in Saturday’s Final at Wings Event Center in Kalamazoo.

"I have coached these guys since they have been knee-high," Boudro said. "I have been coaching at Lowell for 15 years; some of the guys on this team weren't even born when I started. It just starts getting more personable, and that is what coaching is really about. Making relationships, and relationships grow stronger. I love these kids, and I love their families – they support you a lot."

You could tell the closeness of this year's Lowell team all weekend in Kalamazoo, as the Red Arrows marched through Bloomfield Hills Brother Rice in the Quarterfinal and then Gaylord in the Semifinal to set up a rematch with the Martians in the championship match.

Starting at the 189-pound weight class, Goodrich got on the scoreboard first with Cameron Macklem’s pin in 1 minute, 36 seconds.

Lowell got on the board thanks to one of its senior leaders, as Carter Blough – the top-ranked 215-pounder in Division 2 – won by technical fall, 22-7.

Lowell went on to win six of the next seven matches after Blough's impressive victory, setting the tone for another team title heading back home to Lowell. 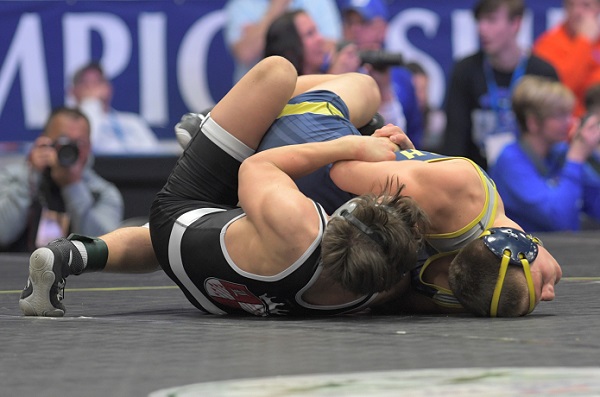 "Last year we didn't have the energy, the people here, like we did this year," Blough said. "We didn't have that stage, but this year we had our crowd here, we secured the dual and we are super excited."

Last year, in the middle of the pandemic, Lowell beat Goodrich 59-7 for the championship. This year would be a bit tougher, but the Red Arrows continued to show the dominance in the division they have displayed over the past decade.

"Lowell is a good team. I don't know what else to say," said Goodrich coach Kenneth Sirignano, whose team ended its year with a 31-3 record. "They were better than us today, by quite a bit."

Sirignano said momentum swung on some tight matches throughout the Final.

"Even during COVID we found a way to work around it and get better," Blough said. "That's how this team is – we always find a way to get better no matter what's in front of us."

Lowell, which finished this winter with a 23-3 record, will wrestle for a 10th-straight championship next season. No other team in the state, no matter the division, has won more than five consecutive titles.

"This is ridiculous," Boudro said. "It's hard to put into words."