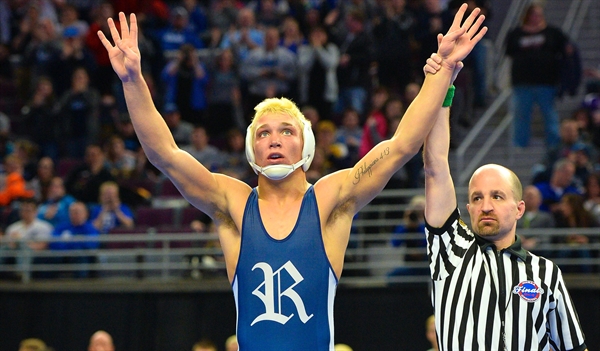 By Connor Chaney
Special for Second Half

AUBURN HILLS – On a night when the MHSAA paid tribute to its previous 19 four-time Wrestling Finals champions with a video played on the giant Palace scoreboard, Devin Skatzka remembers a couple shown giving him inspiration to accomplish the incredible feat himself.

Skatzka became No. 21 on that storied list, as he won by technical fall over Ida’s Alex Phillips in their 160-pound match in Division 3.

Earlier Saturday evening, Davison’s Lincoln Olson was No. 20, as he won his fourth title in Division 1, at 135 pounds.

“Freshman year is when I definitely thought I could do this (become a four- time champion),” Skatzka said. “It was a dream of mine to do this after watching (Davison’s) Brent Metcalf and (Fowlerville’s) Adam Coon and all the other guys do this.”

Skatzka had special company up close to watch him do it, as Richmond assistant coach, and more importantly his dad, Dennis Skatzka was on the side of the mat guiding him with former head coach and Richmond legend George Hamblin.

“Getting to enjoy this with my dad is pretty awesome,” Skatzka said.

In building a champion, it always takes help from many. From parents to coaches to teachers, the effort is several layers in the making.

But to many wrestlers, that most important component may be their teammates and workout partners.

That was the case for Greer.

“I wouldn’t be here without him (referring to Tri-County 112-pounder Nick McGhan),” Greer said, “We have been wrestling since we were 3 years old”.

It is never easy when teammates wrestle each other in a match during a tournament.

But when it’s the MHSAA Final, that’s even harder on all involved.

“It was a great experience wrestling a teammate in the Finals,” Trombley said. “Being a four time state champion has always been the goal of mine, and this is just the beginning of that.”

It was the second straight year Schroder had to beat a returning champ to win; last year he beat Leslie’s Kanen Storr.

“It’s the great thing about this sport, you can be a state champion, a nation champion, but there is always going to be people coming at you with a target on your back,” Schroder said. “So all you have to do is just go knock them down. “

Brown willed himself to a championship. And sometimes that’s all it takes.

He had all the self-confidence in the world as he was battling a tough foe in Fenner, a champion two seasons ago. But positive thinking pushed Brown to the win.

“I am going to be a state champion,” Brown said. “That is what was going through my head as I secured that last-second takedown to win the match.”

Santos makes no apologies for the way he wrestles.

He admittedly is a defensive wrestler, and it worked again in a tough 3-1 win for his first MHSAA title. Santos was a runner-up two seasons ago.

Sometimes there is nothing better than a tough loss to motivate.

It worked for Storr, who lost out on winning his second MHSAA title last year when he was defeated by Grand Rapids Catholic Central’s Schroder at 119 pounds.

Storr got that second title Saturday with an impressive 9-4 win.

“Every day when I am in the wrestling room, I remember last year’s State Finals,” Storr said. “I just remember the memory of losing, and it was so painful. But it’s what pushed me to work harder every single day.”

Limmex hasn’t lost at The Palace since his freshman year.

He was at Lowell High School at the time, and took fourth in Division 2.

“No, I don’t think I have a favorite (championship); they have all been all pretty good,” Limmex said. “This was a good way to end the career, on top – it’s always good to go out with a win.”

The Grand Rapids Catholic Central brigade continued at The Palace, as Karmon took to the mat to try and win his second straight Finals title.

Last year he won the 125-pound bout while wrestling at Allegan High School. But a family move to Grand Rapids and a jump in weight classes changed little, as he won this time by major decision.

“My strategy is more of my mindset with me. I just had to look at it as one more match,” Karmon said.

Gasper had a strategy to dominate.

He held to that plan in claiming his first MHSAA championship and finishing this season with only one loss.

“Just take control of the match and dominate the whole match,” Gasper said. “That’s what I did, and it feels great to win as a sophomore.”

It’s not often when a freshman comes into high school wrestling and wins on a consistent basis at one of the heavier weight classes.

But that’s exactly what Whitman did this winter, as he won 57 matches and then a title Saturday night.

“I was super excited, and I was a little bit nervous,” Whitman said. “I didn’t know how big (MHSAA Finals) was and what was going to be happening, but when I started wrestling I felt more confident.”

Sticking with impressive underclassmen, a pair of super sophomores wrestled for the 189-pound title.

Millington’s Jared Roehl stayed undefeated with a close decision to close his second trip to the Finals.

“After taking sixth as a freshman last year and hurting my shoulder and eventually having to get shoulder surgery, this feels a lot better, that for sure,” Roehl said. “Finally being able to take the top of the podium healthy is all I can ask for.”

Division 3 looks highly competitive for years to come, as another sophomore shined at 215 pounds.

“I have been working toward this my whole life,” Hillger said. “This feels great.”

Sometimes winning an MHSAA title when you are a freshman can seem like an unrealistic goal.

That’s how Williamston junior Maddox Maki felt. But as a junior, that dream became reality.

“As a freshman I kind of joked around saying I could win a state title, and as the years went on it became more and more realistic and finally it came,” Maki said.  “Now I did it and it feels great.”

PHOTO: Richmond’s Devin Skatzka is saluted by the crowd after becoming the 21st in MHSAA history to win a fourth Finals championship. (Click to see more at HighSchoolSportsScene.com.)