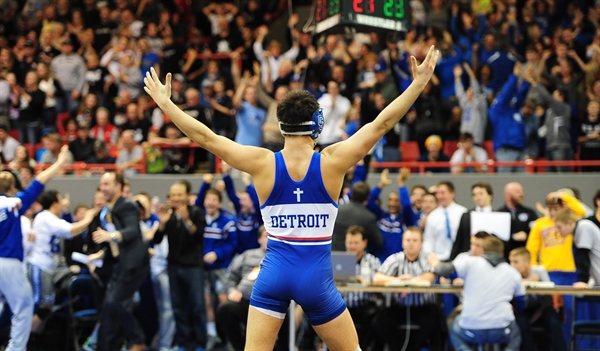 By Dan Stickradt
Special to Second Half

BATTLE CREEK — Payback is never tougher than in a championship setting. Ask those around Davison’s wrestling program.

After losing to fellow state powerhouse Detroit Catholic Central in last season’s MHSAA Division 1 title match, 29-26, in a meet that went down to the final weight class, top-ranked Davison sought its revenge on the Shamrocks on Saturday at Battle Creek’s Kellogg Arena.

Catholic Central still proved too much to overcome.

Davison, top-ranked all season and top-seeded for the MHSAA Finals weekend, couldn’t hang on to a 19-13 lead through eight matches, as Catholic Central closed out with a 21-0 run by winning the last six to prevail.

"All season long our coach told us not to talk about a three-peat," said Garcia, who also finished as an MHSAA individual runner-up as a freshman. "He told us that we had to go out and try to win a state championship and not try to defend it. Our goal all along was to win the state title, and we (rose) up and did it.

The win marked Catholic Central’s 11th team title, which ties the MHSAA record for most in Class A/Division 1 lore.

“This ties Temperance-Bedford for the most in Division 1 history. That’s shows how hard the kids work in this wrestling program,” said Catholic Central coach Mitch Hancock, who has guided the Shamrocks to a 149-32 record over seven seasons as head coach. "That's something we take a lot of pride in. But I told the entire team, coaches and parents at the beginning of the season that we were not to mention the (phrase) three-peat. Every year is different and our goal was to go out and try to win a state championship." 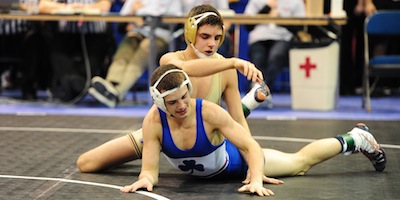 Davison defeated Catholic Central, 31-28, in a match in December. But the Cardinals couldn't match up with the Shamrocks this time around.

"They had a couple of guys out the last time, so they had everyone back this time and those guys made a huge difference for them," noted Davison coach Roy Hall, whose program slipped to 8-3 all-time in MHSAA championship matches. "This played out similar to what I thought. We needed a couple of close matches to go our way, and they didn't. That's wrestling. We wanted to get them back (for last year) but came up short."

"Those guys are amazing. They were in the wrestling room three days after football season ended (with another MHSAA Division 1 championship game) and ready to go at it," said Hancock. "What else can you say about those guys? They are champions on and off the mat. That's the type of dedication that we have here at Catholic Central. These kids never stop working."

"This is all about Catholic Central High school, representing Catholic Central, the administration, the parents, and giving glory to God," added Hancock. "We would not be able to do this without any of them."

Catholic Central entered the weekend the third seed and finished 18-4, taking down second-seeded Hartland in the Semifinal and sixth-seeded Plymouth in the Quarterfinal on Friday. Davison ended 25-4 and beat Livonia Franklin then Oxford to advance.