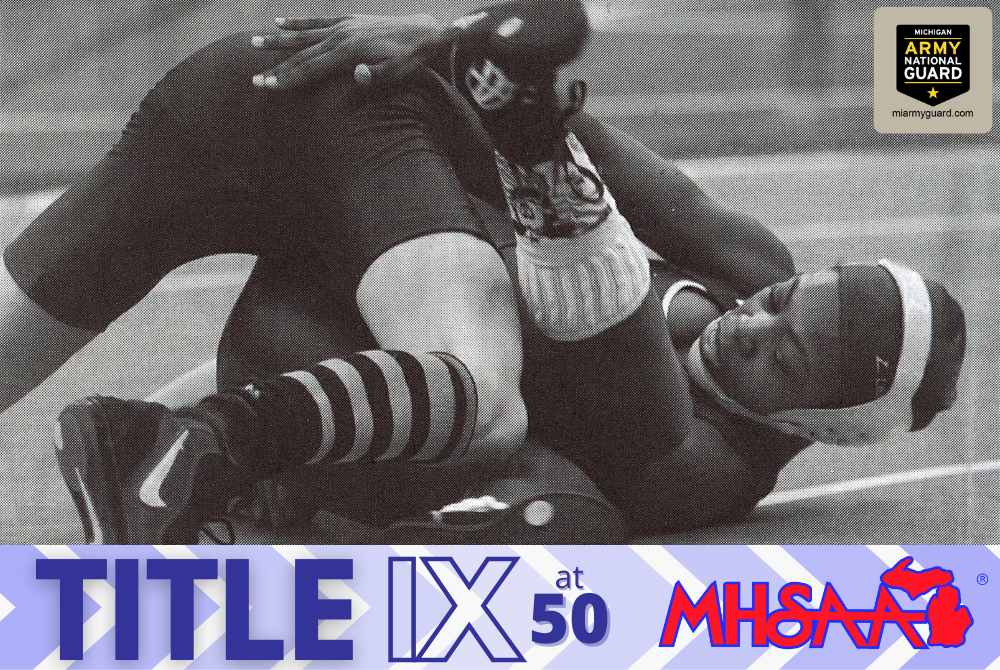 This March, for the first time, 14 championships and 112 medals total will be awarded to the highest achievers from a girls-only division at the MHSAA Individual Wrestling Finals – the latest of history-making steps over the last 30 years of girls competing on the high school mat in Michigan.

There have been many heroes along the way, as participation has grown to see more than 400 girls wrestle at MHSAA member schools during the 2019-20 season, the last not interrupted by COVID-19 (and 283 took the mat last year despite reduced participation across the sport after a late start due to the coronavirus.)

About 900 athletes open the annual Individual Finals with a “grand march” to kick off the now two-day event. First among Michigan girls to join the parade was a pioneer from a now-closed high school who, by competing at Joe Louis Arena on March 11, 1999, took a major first step toward cultivating the opportunities of today.

Saginaw Buena Vista’s Cynthia Harrold, then a senior, brought a 29-7 record into the Finals and competed in Division 3 at 103 pounds. She lost both of her matches, but not without plenty of deserved fanfare for her accomplishments in making the journey. Many matches are wrestled simultaneously at the Finals, especially during the early rounds, and so many photographers swarmed to capture her matches that the adjacent mats needed to be shut down to accommodate the media crowd.

According to a Detroit Free Press report published that Thursday highlighting the start of the tournament, Harrold had won 98 matches over her four-year high school career. She also played softball and ran track, and previously was a cheerleader before turning her winter sports focus completely toward wrestling.

She was set to join the grand march that day in Detroit with 895 other wrestlers, all boys. The following year, three girls qualified for the Individual Finals. Martin’s Amy Berridge in 2004, Goodrich’s CC Weber in 2009 and Clawson’s Katlyn Pizzo in 2017 would become the first to place at the state championship wrestling tournaments, bringing additional spotlight to girls achieving at the high school level.

With interest continuing to grow, the Michigan Wrestling Association (the sport’s high school coaches association) began sponsoring a Girls Wrestling Finals in 2019 – with momentum from that event leading to the creation of the MHSAA girls individual championship division at Ford Field to debut this season.

(Photo courtesy of the Detroit News.)