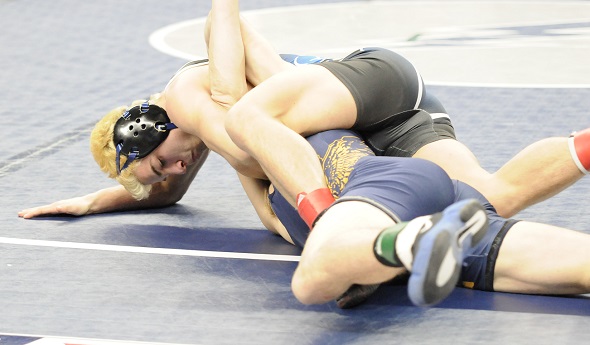 Typically, distractions in sports are seen as a bad thing.

For Lake Fenton senior wrestler Jarrett Trombley, however, setting the goal of breaking the state’s single-season takedown record was the perfect distraction to keep his mind off chasing a fourth straight MHSAA individual title.

“It’s something else to think about other than state,” he said. “It was just a goal I had, and I just went out there and wrestled every single match the best I could, tried to get as many takedowns as I could, and tried to be as dominant as I can be. I was just taking it match by match, and that has taken a little bit away from the whole four-time state title thing.”

The “four-time state title thing” is now next on Trombley’s to-do list, as the MHSAA Individual Wrestling Finals begin Friday at Ford Field in Detroit. Trombley, who wrestles at 130 pounds, will look to become the 23rd wrestler in state history to accomplish the feat. He and Dundee’s Brandon Whitman, also in Division 3, both will attempt to finish the achievement.

“The message this week, and we’re going over it now, is to work hard and do your job,” Lake Fenton coach Vance Corcoran said. “Everyone has trained their whole lives for this. It’s been a long season, and you’ve done your job in this room; now it’s time to do your job on the mat. Dominate and attack, and do what he’s done all season.”

Trombley has certainly been dominant while attacking all season, averaging more than 10 takedowns per match on his way to a 55-0 record through the Regional tournament. His 565 takedowns is well beyond the previous MHSAA record of 526 set by Jake Bohn of East Kentwood in 2007-08, which has stood as the National Federation record as well. He has also surpassed the 559 set by Karson Hill of Trenton High School in Missouri in 2007-08, the previous high according to another national record book maintained by wrestlingusa.com.

It may have served as a distraction, but it’s also helped make Trombley a better wrestler and a better conditioned athlete, as it’s forced him to work on things within a match and stay on the mat longer than he would with a quick pin. He does, he said, work for the pin eventually to get as many team points as possible.

“All of the takedowns helped me get in better shape and have better conditioning,” said Trombley, who is ranked 10th in the country at 132 pounds by FloWrestling. “It’s helped me in my matches.”

Now, though, Corcoran said it’s time to focus solely on winning, and doing so as soon as the opportunity presents itself.

“Coming up to the state meet, if he gets the chance to put a guy on his back, he isn’t going to let him up,” Corcoran said. 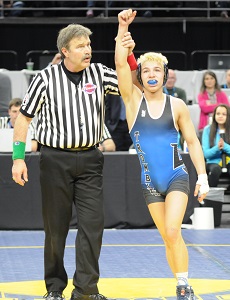 Trombley – who has won Division 3 titles at 112, 119 and 130 pounds – doesn’t need reminders that even three-time champions can be vulnerable when going for their fourth. To win his second title in 2016, Trombley defeated Grand Rapids Catholic Central’s Devin Schroder – denying the three-time champ Schroder a fourth title.

“It keeps my mind in focus every day in the practice room,” Trombley said. “It can just as easily happen to me. There’s a state champ on my bracket this year, and a few others that are really good.”

The win against Schroder, who is now wrestling at Purdue University, was big for Trombley beyond simply winning his second MHSAA Finals title.

“Before that I hadn’t really wrestled any stellar competition in high school, per se,” Trombley said. “He was the talk of the state for two or three years, so I had to be confident going into that match, and I was confident. After I did win, it kind of changed things. I didn’t know he was nationally ranked until I had beat him. I was nationally ranked after that, so I just kind of worked even harder. I kind of proved to myself that I can beat anyone if I work hard.”

As colleges began courting Trombley, one started to stick out -- North Carolina State. He signed with the Wolfpack this past November.

Trombley believes his wrestling style will translate well to the college level. For now, though, he’s focused on finishing up his high school career the right way, and so is everyone around him.

“Jarrett is just one of those kids that he never quits,” Corcoran said. “His work ethic is through the roof; he’s focused and he’s determined. He’s from a great wrestling family, he’s super grounded, and if you hear anyone say anything about Jarrett as a four-timer, his mom is right there to say, ‘You have to win one more.’

“He understands that nothing is given to you, that you have to earn it.”