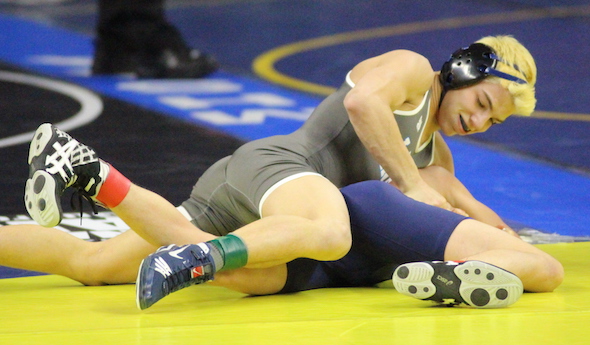 AUBURN HILLS – Jarrett Trombley ended a bit of history Saturday night at the MHSAA Individual Wrestling Finals at The Palace of Auburn Hills.

And along the way, he kept his own bit of history going.

And Trombley won his second straight Division 3 Finals title, to go with the 112-pound championship he earned last year while wrestling for Corunna High School.

"Pretty much everyone knew who won this match would be a (four-time) champion, whether it was me in two years or him today," Trombley said. "I'm just really happy to hold him back from history and make some of my own history today."

It wasn't easy, though, as the match went into an extra period, where Trombley secured the win with a takedown.

"That's why we work so hard, Trombley said. "We were both very well-conditioned athletes; it just came down to whoever had the most heart."

After shaking hands with the opposing coaches, Anthony Gallagher sprinted across the mat and jumped into his coach's arms.

He first wanted to share his special moment with two people who helped realize his dream.

"This is amazing," Gallagher said. "My coaches and I put so much work into this. So much blood, sweat and tears, and to finally see what I've wanted to accomplish since the start of the year is amazing."

What's even more amazing is that Gallagher is the first wrestling MHSAA champion at Perry High School in 41 years.

Good was better than good; he was great this weekend in Auburn Hills. And because of that, the Jackson Lumen Christi junior is a champion.

Good said it was old-fashioned work ethic that helped him come out on top in his weight class this weekend, and it showed in the Final as he took the match to Wood from the start.

"I am so thrilled with this; this is the best feeling I have felt in my life," Good said. "There is so much work and effort put into this sport, and this is the dream behind it all. You put in so much work, to finally accomplish this, it's a big deal."

Kilburn is a man of few words. He let's his talking be done on the mat.

Kilburn won his second title with a workmanlike 7-1 decision.

The Richmond senior won his first title at 112 pounds at the end of his sophomore season.

"It feels a little different this time since it’s my senior year," Kilburn said "Going out with a bang, that's a bonus."

Even though it was Kilburn's day, he looked back at Richmond history to get through his last year.

"Watching him (Richmond 4-time champion Devin Skatzka) dominate this tournament for four years helped," Kilburn said of his former teammate who accomplished that feat last year. "He just dominated this tournament, and showed me."

As a freshman, Martinez advanced to the Finals, only to lose a tough match and finish runner-up.

It took two long years to get back to wrestling Saturday night at The Palace for a championship, but that's where Martinez found himself, wrestling Krauss for the title at 130 pounds.

The match went to overtime, and Martinez rode Krauss out for a hard-fought 4-3 victory.

"Then in the second period I rode him out," he added. "In the third period, I got a little gassed, I'm not going to lie. Triple overtime, I was stuck on bottom all match, so I went on top and that is usually my best position. I got that side headlock, and got it done."

It was a battle of returning champions at 135 pounds, and the match would not disappoint, as Brown rode out Santos in triple overtime for the win, 2-1.

Britton didn't get a chance to watch teammate Reiley Brown win his MHSAA title. He was busy in the tunnel of The Palace warming up for his match as Brown was finishing off Matt Santos.

But Britton knew something special happened for the Whitehall wrestling program, and he wanted to keep that feeling going in his match.

And that happened, as Britton beat Blevins on a late takedown.

"I didn't even get to watch his (Brown's) match, but we both had a plan to come out here and wrestle for a championship," Britton said. "My coach said I was better on my feet, so when he was up by one in the third because I cut him early, I knew I could win on my feet."

On a night when several past champions, and a few multiple champions like Schroder and Lowell senior Lucas Hall went down to defeat, Storr, a returning two-time champ, was not about to fall by way of the upset.

"Sitting back in that tunnel, watching all these upsets go down, it's a crazy thing," Storr said. "Guys I thought would never lose, went down. But they may have let up, they might have gave those extra points up that they shouldn't have. Going into my match, I really changed my mindset  to score and get a comfortable lead, to score, score and score."

Sterling reached into his school's past for inspiration for what he did Saturday night, earn a championship with a 4-2 overtime win over the previously undefeated Lieber.

Now he will be an inspiration for Dundee's future.

"The entrance to our building, there is a picture of every state champ, and every day I walk into school and look at every single one of them," Sterling said. "And now I am going to be one of them. Knowing that some kid will be looking up at me now, that's cool."

Karmon has had a great high school career that spanned over two schools.

He started by winning an MHSAA title his sophomore year, and then carried that success over to Catholic Central his past two years.

He won his third overall title, and second at GRCC.

Thomson picked up a little scouting report from a friend, Lapeer senior Devon Pingel, that helped him win Saturday.

"That helped me a lot. I owe a lot to him, because my focus was to stay aggressive progressively throughout the match. That helped a lot when we got into overtime," Thompson said.

Unfortunately, Thompson's friend Pingel was losing his championship match a mat away from Thompson.

When two reigning champions meet on the mat, the margin of error shrinks, and the matter of victory can be as little as a little more work and effort to pull out the win.

That was the case when Whitman and Roehl met for Roehl's title Saturday night.

Whitman, who won at 171 last year, found that little bit extra in beating Roehl by the score of 2-1.

"That was tough," Whitman said. "At the beginning of the year we kind of figured we were going to face him, and we knew we were going to have a tough time with him. I knew I had to practice harder to get the job done."

Wilber not only showed his great athleticism during his 8-2 win, but also after, completing a near-perfect back flip to seal it.

And during the post-match interview, Wilber wanted to flip some of the credit to the people he said helped him realize his dream of a title.

"This feels real good," Wilber said after his win. "I went in with the mindset I could do it, and I went in and got after it. I want to thank my (workout partners) for pushing me and getting after me. And to all my teammates, thank you."

Hillger may have had the most impressive weekend of any champion in any division at The Palace.

He pinned his way to his second championship, including a fall against reigning heavyweight champion Maki in the Final in one minute, 27 seconds.

"Being a state champ last year, I wanted to come back as a returning state champ and not lose my title," Hillger said "I wanted to be aggressive and use my speed to my advantage. Coming up from a lighter weight class, a lot of these heavyweights are slower, and I wanted to go out there and wrestle my match."