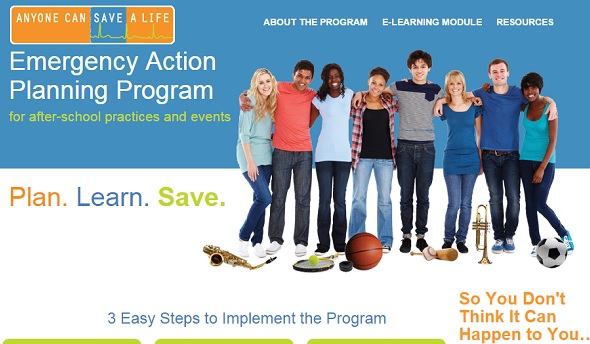 It was 2008 when Jody Redman and staff at the Minnesota State High School League developed an emergency action plan to provide guidance and procedure in the event of sudden cardiac arrest during scholastic athletic competition.

The desired response from schools upon receipt of the plan was, well, less than enthusiastic.

“Only about 40 percent of our schools used the information and implemented the program,” said Redman, associate director for the MSHSL. “Our focus was completely on sudden cardiac arrest, that being the worst-case scenario regarding athletic-related health issues.”

The MSHSL asked the University of Minnesota to survey its member schools, and results showed that the majority of schools not on board simply felt a sudden cardiac arrest “would never happen at their school.” Naive or not on the schools’ parts, that was the reality – so Redman went back to revise the playbook.

“We expanded the plan to deal with all emergencies, rather than specific incidents,” Redman said. “Now it’s evolved so that we are prepared to deal with a variety of situations which put participants at risk. We shifted gears and got more schools to participate.”

Did they ever. And not just in Minnesota.

This summer, the “Anyone Can Save a Life” program, authored by the MSHSL and the Medtronic Foundation, is being disseminated to high schools nationwide with the financial support of the NFHS Foundation. The program will reach schools in time for the 2015-16 school year.

Once received, schools will find that there are two options for implementation, via in-person training or online.

“The in-person method is facilitated by the athletic administrator with the assistance of a training DVD” Redman said. “The important element is the follow through, ensuring coaches return their completed Emergency Action Plan (EAP). With the e-learning module on anyonecansavealife.org, individuals will complete an e-learning module that will walk them through the details of their specific plan, and as they answer questions, the information will automatically generate a PDF of the Emergency Action Plan (EAP) which they can edit at a later date as information changes.”

Schools will find five major components of the program to be received this summer: the first is an implementation checklist for the AD, explaining their role. Next are sections for in-person training, online training and event staff training. The last item contains a variety of resources that will ensure the successful implementation of a comprehensive emergency response to all emergencies.

Generally speaking, the program prompts schools to assemble preparedness teams, broken into four categories: a 911 team, a CPR team, an AED team and a HEAT STROKE team. The groups are made up of coaches and their students who will be in close proximity to all after-school activities.

“The reality about school sports is, at 3:30 every day the office closes and any type of medical support ceases to exist,” Redman said. “We then send thousands of students out to gyms, courts, fields and rinks to participate without systemic support for emergencies. This program puts into place that systemic support.”

Another stark reality is that the majority of schools in any state do not have full-time athletic trainers. Even for those fortunate enough to employ such personnel, it’s most likely the training “staff” consists of one person. That one body can only be in one place at one time, and on widespread school campuses the time it takes to get from one venue to another could be the difference between life and death.

“Athletic trainers can champion the program, but someone needs to oversee that every coach has a completed EAP in place,” Redman said. “For every minute that goes by when a cardiac arrest occurs, chance for survival decreases by 10 percent.”

Thus, it’s imperative to train and grant responsibility to as many people as possible, including student-athletes. In fact, students are a vital component to having a successful EAP. Students will be put in position to call 911, to meet the ambulance at a pre-determined access point, to locate the nearest AED, to make sure emersion tubs are filled for hot-weather practices, and for those who are trained, to assist with CPR.  Coaches will identify students at the beginning of the season and prior to an emergency taking place.  They will provide them with the details of the job they are assigned so they will be ready to assist in the event of an emergency.

“We have game plans for every sport, and for every opponent on our schedule,” Redman said. “But we don’t have a plan to save the life of a member of our team or someone attending a game at our school.

“This is about developing a quick and coordinated response to every emergency so we give someone in trouble a chance at survival, and then practicing it once or twice a season. We have ‘drop the dummy’ drills where we drop a dummy and evaluate how it went, and how everyone performed. In one scenario, it’s the coach that goes down, and then you have a group of 15- or 16-year-olds standing there. That’s why students have to take ownership of this, too.”

The key to an effective emergency action plan is to utilize and empower students in every sport and at every level to be a part of the response team. Following are brief descriptions of the teams.

For more information, visit anyonecansavealife.org or contact the MSHSL.