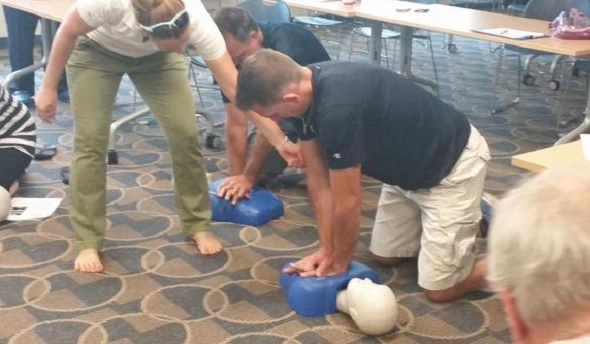 A recent graduate from Ovid-Elsie High School named Chris Fowler started classes this fall at Michigan State University, his days representing the Marauders on the basketball court, football field and golf course now memories as he starts the next chapter of his young adult life.

But his story also will remain a reminder as his high school’s athletic department prepares each year to keep its athletes as safe as possible.

Three years ago next month, Fowler collapsed on the football practice field in cardiac arrest. The then-sophomore was brought back to life by two of his coaches, who revived him with CPR and an AED machine.

There’s no need for athletic director Soni Latz to recount the events of that day when explaining the importance of being ready to respond to a medical crisis – her coaches are well aware of why Fowler survived and understand completely why they too must be prepared.

“Everyone is very aware of what happened and the importance of being trained and knowing what to do, and actually feeling comfortable to step in and administer CPR when needed,” Latz said. “You can feel it’s never going to happen to you, but once it has, it makes you more aware and conscientious to be prepared.”

But Fowler’s story is worth noting on a larger level as varsity coaches at all MHSAA member schools are required this year for the first time to become certified in CPR, and as the largest classes in Coaches Advancement Program history begin course work that includes up to four modules designed to make them aware of health and safety situations that may arise at their schools as well.

The CPR requirement is the most recent addition to an MHSAA thrust toward raising expectations for coaches’ preparedness. The first action of this effort required all assistant and subvarsity coaches at the high school level to complete the same rules and risk minimization meeting requirement as high school varsity head coaches beginning with the 2014-15 school year.

The next action, following the CPR mandate, will require all persons hired as a high school varsity head coach for the first time at an MHSAA member school after July 31, 2016, to have completed the MHSAA’s Coaches Advancement Program Level 1 or Level 2.

In addition, MHSAA member schools this summer received the “Anyone can Save a Life” program, an emergency action plan curriculum designed by the Minnesota State High School League to help teams – guided by their coaches – create procedures for working together during medical emergencies.

“Coaches get asked to do a lot, and even if a school has an athletic trainer or some other health care professional, that person can’t be everywhere all the time. Coaches often are called upon to be prepared for (medical) situations,” said Gayle Thompson, an adjunct assistant professor at Albion College who formerly directed the athletic training program at Western Michigan University and continues to teach CAP sports medicine modules.

“The more (coaches) can learn to handle the situations that can inevitably arise, the better off they’re going to feel in those situations and the better care they’ll be able to offer their athletes. It’s proven that the faster athletes are able to get care, the quicker they’re able to come back to play.” 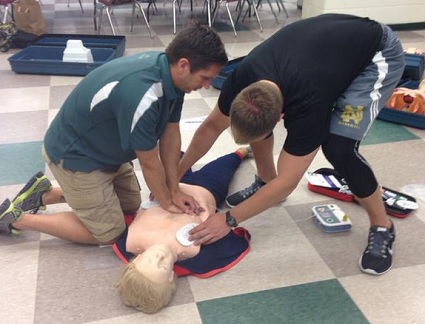 Pontiac Notre Dame Prep – which has sent a number of coaches through the CAP program – began a focus on heart safety about five years ago after a student-athlete was diagnosed with a heart issue that allowed her to continue to play volleyball and softball, but not basketball. Athletic director Betty Wroubel said that prior to the student’s diagnosis, the school did provide training in CPR, AED use and artificial respiration; however, that situation put coaches and administrators further on the alert.

Her school offers CPR training also to subvarsity and middle school coaches, using a combination of video instruction from the American Red Cross and in-person guidance by members of the school community who are certified to teach those skills. Students at the school also have received training – and it paid off a few years ago when one of them gave CPR to a baby who had stopped breathing at a local shopping mall.

Portage Central scheduled two sessions this fall for its coaches to receive not only CPR certification, but AED training as well. Central was fortunate to have an American Red Cross first-aid trainer in house, teacher Rachel Flachs, who also is close to the athletic side as the girls swimming and diving coach at Mattawan High School.

Central athletic director Joe Wallace said the training was offered not just to varsity head coaches, but every head coach on every level of the program so that “at least we know that at every given practice, every game, we’d have someone recently trained,” he said.

And he was proud of how his coaches immersed themselves in the subject matter.

“They were putting themselves in scenarios to see how it related to their own sports and asking really great questions,” Wallace said. “It was thought provoking.”

The CAP sports medicine modules are designed to do the same as coaches consider the medical situations they could face. They aren’t designed as “medical training,” said Tony Moreno, a professor of kinesiology at Eastern Michigan University and teacher of all four CAP sports medicine modules. Rather, attendees receive an awareness and basic education on common injuries, injury mechanisms and prevention, and how to create an action plan in the event of an injury incident.

The CAP program touches on a variety of safety topics in several of the available seven levels of coach education.

CAP 1 – which is part of the mandate for new coaches beginning next school year – includes “Sports Medicine and First Aid.” Cap 4 has modules titled “Understanding Athlete Development” and “Strength and Conditioning: Designing Your Program.” CAP 5 includes the session, “Peak Health and Performance.” Attendees also have the option of receiving CPR and AED training as an addition to some courses.

With a quick Internet search, coaches have no trouble finding a variety of resources on sports medicine, performance enhancement, nutrition and healthy living regarding young athletes. “However, some of these sources are more credible and scientifically-based in comparison to others,” Moreno said. “CAP strives on an annual basis to continue to update and improve the quality and credibility of this information and in a face-to-face manner where coaches have the opportunity to ask questions about their experiences and specific programs.”

“Having the CAP requirement will only make them better informed. Many have had this kind of information before, but there’s always something new coming,” Thompson added. “I think we do a good job, not of trying to tell them they were wrong, but maybe taking what they’ve known a step further and making them better prepared – empowering them to do their best.”

Wroubel may understand more than most athletic directors the growing list of tasks coaches are asked to accomplish; she’s also one of the winningest volleyball and softball coaches in MHSAA history and continues to guide both Fighting Irish programs.

But she and Wallace both said the CPR mandate isn’t considered another box to check on a to-do list; there’s enthusiasm because of its importance and the opportunity to carry those skills into other areas of community life as well.

Wroubel has served as a coach since 1975 and said this renewed emphasis on coaches having knowledge of sports medicine actually is a return to how things were when she started. Back then, coaches were responsible for being that first line of medical know-how, from taping ankles to providing ice and evaluating when their athletes should make a trip to the doctor’s office.

“When I first started coaching, we didn’t have sports medicine people, trainers, or team doctors other than for football. You did everything yourself,” Wroubel said. “I think everybody got away from that, but I think it’s coming back because a trainer can’t be everywhere.

“It’s healthy and it’s good for kids. … The more of us with emergency skills, the better we’re able to serve our community.”