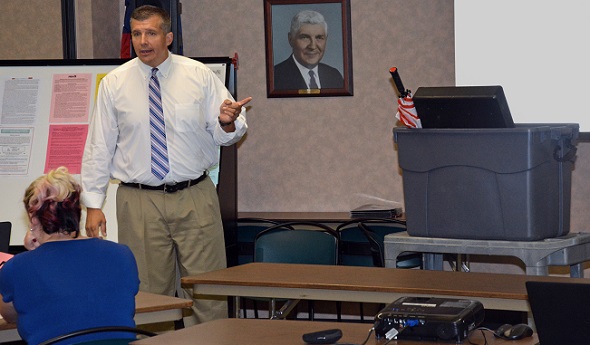 EAST LANSING – The first new administrators to take part in the MHSAA's New Athletic Director Orientation Program for 2018-19 on Thursday received what's become an annual greeting by Executive Director John E. "Jack" Roberts – who then handed off for an introduction by Assistant Director Mark Uyl, who will take over for Roberts next month.

The AD orientation program is required for first-year athletic directors and athletic directors at new MHSAA member high schools, and more than 30 were in attendance for this first of three sessions at the MHSAA Office in East Lansing. MHSAA staff will provide this training, primarily on rules and regulations, to an expected 150 new athletic directors this fall, with sessions also Aug. 7 and then Sept. 11 for late hires.

Uyl has served as an Assistant Director at the MHSAA for nearly 15 years and previously was athletic director at Caledonia and Middleville Thornapple-Kellogg high schools. Roberts is retiring in August after serving as Executive Director for 32 years.

PHOTO: MHSAA Assistant Director Mark Uyl points out some of the tools new athletic directors will keep close at hand as they begin their work this school year.