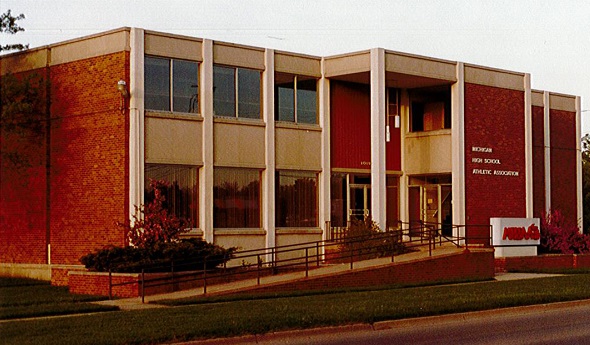 The following is an excerpt from “History, Rationale and Application of the Essential Regulations of High School Athletics in Michigan.”

Throughout the years, schools of this and every other state have identified problems relating to school transfers.

There is recruitment of athletes and undue influence. There is school shopping by families for athletic reasons. There is jumping by students from one school to another for athletic reasons because they couldn't get along with a coach or saw a greater opportunity to play at another school or to win a championship there. There is the bumping of students off a team or out of a starting lineup by incoming transfers, which often outrages local residents. There is the concentration of talent on one team by athletic-motivated transfers. There is friction between schools as one becomes the traditional choice for students who specialize in a particular sport. There is imbalance in competition as a result. And there is always the concern that the athletic-motivated transfer simply puts athletics above academics, which is inappropriate in educational athletics.

All states have developed rules to address the problems related to school transfers. In some states it is called a transfer rule and in other states a residency rule, because linking school attendance to residence is one of the most effective tools for controlling eligibility of transfers. None of the state high school association rules is identical, but all have the intention of preventing recruiting, school shopping and jumping, student bumping, friction, imbalance and overemphasis, as well as the intention of promoting fairness in athletic competition and the perspective that students must go to school first for an education and only secondarily to participate in interscholastic athletics.

Over the years, state high school associations have considered four options to handle transfers. The first two options are the easiest courses:  either (1) let schools decide themselves about transfers, as Michigan once did, but this leads to inconsistent applications and few states now subscribe to such an approach; or (2) make no exceptions at all, rendering all transfer students ineligible for a period of time, but this becomes patently unfair for some students and no state high school association subscribes to that extreme, although it would be easy to administer.

The third option – the ideal approach perhaps – would be to investigate the motivation of every transfer and allow quicker eligibility or subvarsity eligibility to those which are not motivated by athletics, but this is very time consuming if not impossible to administer.  No state high school association has sufficient staff and money to consider every detail of every transfer.

This is why a fourth option has been most popular with most state high school associations. This is a middle ground which stipulates a basic rule, some exceptions (15 exceptions in Michigan), and procedures to consider and grant waivers (a primary role of the MHSAA Executive Committee).

It is certain that the MHSAA transfer rule is imperfect. However, whatever few imperfections exist are remedied through a process by which member school administrators may make application to the MHSAA Executive Committee to waive the rule if, in the committee's opinion, the rule fails to serve any purpose for which it is intended or in its application creates an undue hardship on the student. In a typical year, the Executive Committee will receive approximately 250 requests to waive the transfer regulation, approving approximately 60 percent of those requests.

The committee brings to its considerations the following rationale, most recently reviewed and reaffirmed on Aug. 5, 2015:

Following the adoption of a more standardized statewide transfer rule in 1982, there were multiple legal challenges. However, in 1986, the Michigan Court of Appeals determined that a rational basis exists for the transfer regulation and that the rule, with its exceptions, is not overbroad and is neither arbitrary nor capricious, noting that neither a fundamental right nor suspect classification is involved. Berschback v. Grosse Pointe Schools 154 Mich App 102 (1986). That decision is also noteworthy for this statement which has halted or decided subsequent legal challenges:  “This Court is not the proper forum for making or reviewing decisions concerning the eligibility of transferring students in interscholastic athletics.”

There were two major changes in the MHSAA transfer regulation during the 1980s. The first, the athletic-motivated transfer rule, led to the busiest period of litigation in the MHSAA’s history. The other major change, arguably of equal impact, was implemented without any controversy.

This second subtle but substantial change occurred in 1987 when language was adopted to limit eligibility after a transfer to the non-public school closest to the student’s residence, as opposed to any non-public school in whose service area the student lived. “Service area” did not have a consistent definition and created unnecessary concern that non-public schools had the advantage of huge, undefined attendance areas, compared to public school districts at that time.

Some high school associations prescribe geographic boundaries or mileage limitations for students transferring to non-public schools. Michigan simply says it’s only the non-public school closest to the student’s residence, where eligibility may be immediate.

PHOTO: The MHSAA Transfer Regulation dates back to the early 1980s when the Association building stood on Trowbridge Road in East Lansing.