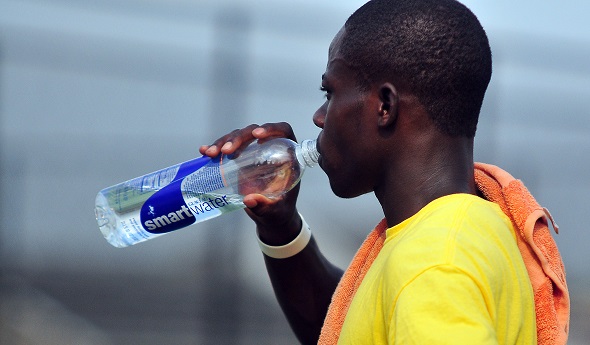 It certainly was not the MHSAA’s intent to spur the most historically frigid back-to-back winters the state has seen. Nor did the Association wish for one of the mildest summers in recent memory during 2014.

Since guidelines were put in place (recommended for regular-season sessions and required for postseason tournaments) before the 2013-14 school year, there have been relatively few days during which psychrometers have had to be implemented.

“The key is, we’ve got plans in place for when the climate returns to normal trends for return-to-school practices and contests in August and September, as well as early June events,” said MHSAA Executive Director Jack Roberts. “It is a bit ironic that there have been relatively few days since the guidelines were established that they’ve actually come into play.”

Certified athletic trainers Gretchen Mohney and James Lioy agree that recent requirements in heat and hydration guidelines are a step in the right direction and encourage that – when possible – an athletic trainer oversee the implementation. Simply taking a reading from just outside the AD’s office or at home does not simulate on-site conditions.

“This doesn’t take into account the radiant heat at the site, which can drastically affect the conditions that athlete plays in. It is essential that all parties involved in making decisions to play collaborate with one another,” Mohney said.

Heat-related deaths in athletics rank only behind cardiac disorders and head and neck injuries, but such fatalities might lead the way in frustration for families and communities of the victims. The reason? Heat-related illness is totally preventable.

Another source of mild frustration is the lack of recording within the state for those practice and game situations which warrant heat protocols.

When the Representative Council was formulating the Heat and Humidity Policy, it was also mindful of ways in which the MHSAA could assist schools in putting the plan into practice. Coaches, athletic directors and trainers needed a method to record information for athletic directors to view and for the MHSAA to track. The MHSAA developed interactive web pages on MHSAA.com which allow registered personnel to record weather conditions as practices and contests are taking place, using psychrometers.

Additionally, discounted Heat and Humidity Monitors and Precision Heat Index Instruments are offered to schools through a partnership between the MHSAA and School Health.

Yet, since the availability of such tools came to fruition two years back, fewer than 1,000 entries have been recorded, and many are multiple entries from the same schools.

Of the 772 entries, only 15 took place when the heat index was in excess of 104, while just 21 indicated an index of greater than 100. Cooler temperatures could be playing a factor in the overall number of participation, particularly in the northern areas of the state.

Nearly all of the responses came during fall practices, with a few isolated cases coming during the spring.

As Mohney pointed out, all resources must be properly used in concert with one another to achieve desired results.

Reminders of the tools available to schools are disseminated throughout the state each summer.