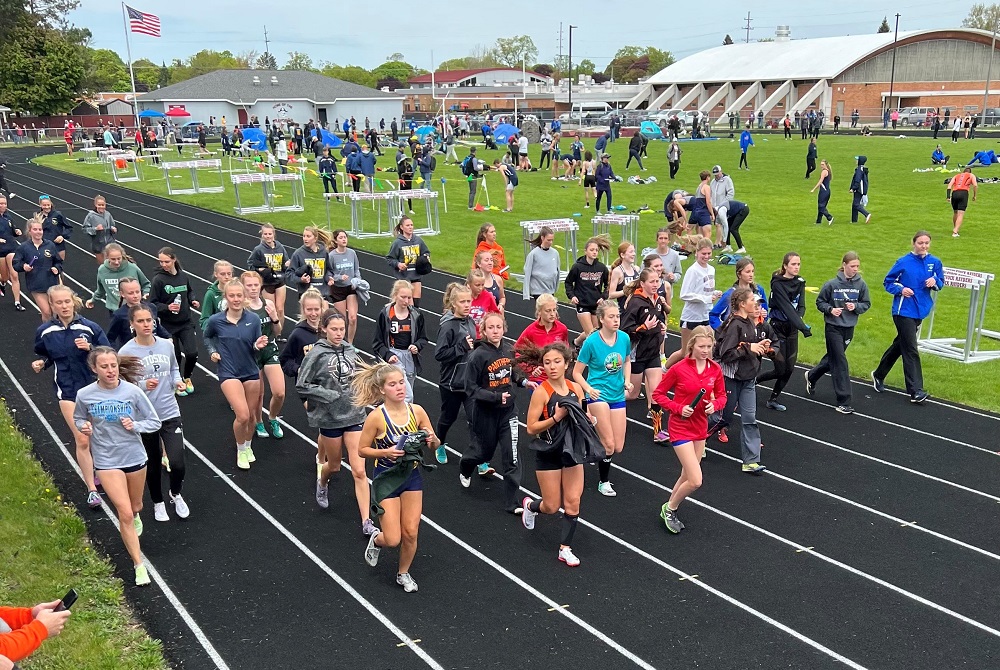 Five minutes later, Inglis heard from Gaylord athletic director Christian Wilson. The school had remained outside of the tornado’s path – but there was significant damage in the community. Add in that Gaylord’s facilities might be needed to provide support in the aftermath – and at that point didn’t have power – and it was a quick and obvious decision to call off the next morning’s Division 2 Regional at Gaylord Community Field.

Within the next hour, northern Michigan’s high school sports community – and especially Charlevoix and athletic director Travis Garrett – would step in with a new plan for the 16 schools coming from as far away as Freeland, Ludington and Petoskey.

Charlevoix, which had hosted the Division 3 Regional that included its teams Thursday, was able to quickly turn things back around to be ready for those schools to arrive less than 18 hours later.

“It is amazing, knowing how much work and how many people it takes to put on an MHSAA Track Regional, that Travis would be able to get this set up as quickly as he did,” Wilson said. “After a few hours of many phone calls and many text messages, we were confident that we communicated to all of the people that needed to know that the Regional would be moved to Charlevoix High School, and they did an outstanding job representing the MHSAA the following day.”

The event timers and scorers from Thursday’s Charlevoix meet actually were scheduled for the Gaylord Regional as well – so instead they stayed in Charlevoix. Wilson and Inglis split up the 80 phone calls they needed to make to get all of the teams updated on the new site, and by 7 p.m. everyone knew about the adjusted travel plan.

That next morning, an outpouring of Charlevoix community members, including the school’s athletic boosters, came out to volunteer and make sure every detail was covered to provide a few more hundred athletes a championship experience.

“The irony is Christian and Gaylord host everything under the sun for the MHSAA. They come to the rescue for us all the time,” Inglis said. “This time, somebody came to his aid and after he’s come to ours and schools’ aids so many times.”

Also important to note: During that first hour, Inglis heard from three more schools in addition to Charlevoix that offered to host Saturday’s Regional if needed.

Charlevoix also collected a significant donation from fans that day for Gaylord High School to use to help families that suffered loss the previous afternoon.

“(Travis) called Monday and I told him thank you again, and he said people came out of the woodwork on Saturday for this,” Inglis said. “It’s another example of how in tough times, schools step up. And Charlevoix and Travis deserve a ton of credit because they went above and beyond.”

PHOTO Runners prepare for the start of a race while the field fills up Saturday at Charlevoix during the Lower Peninsula Division 2 Regional previously scheduled to be competed in Gaylord. (Photo courtesy of the Charlevoix athletic department.)