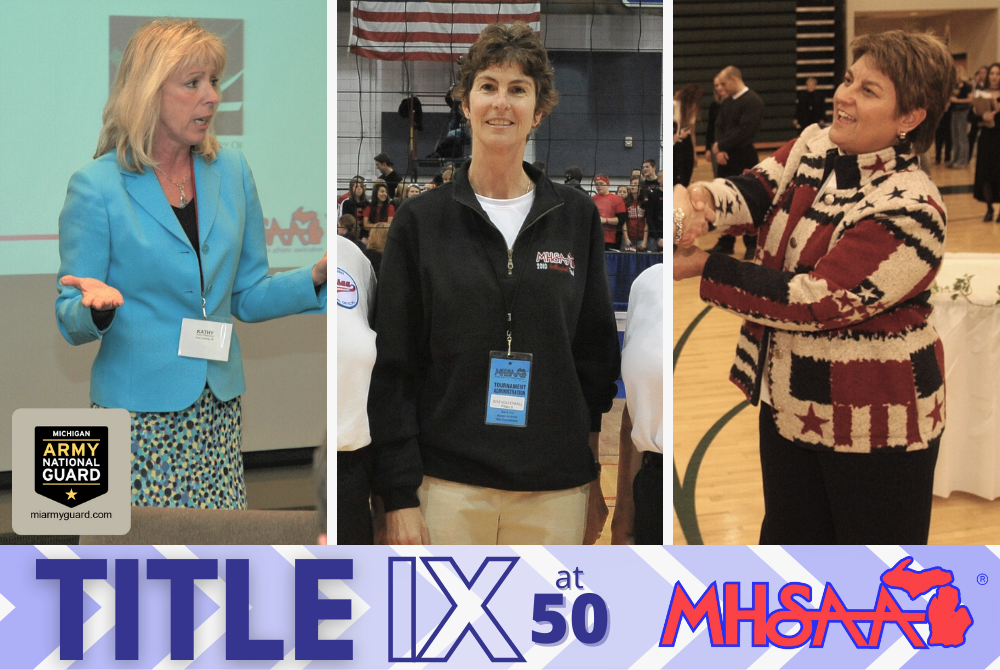 The MHSAA has been fortunate to follow leadership from a number of impactful women over the last 50 years. Many have been members of the Representative Council, or various sport committees and task forces asked to address specific issues in educational athletics.

But day in, day out, and often behind the scenes where most administration is done, three longtime MHSAA assistant directors have provided leadership and advocacy for females in athletics that continues to be transformative in our state, even after two have retired.

► Suzanne Martin joined the MHSAA staff in 1977 and created a pair of programs that have helped make Michigan a national leader in girls high school athletics. A former teacher, coach and cheerleading advisor at Mt. Morris High School, Martin directed the launch of competitive cheer as an MHSAA-sponsored sport with its first championships awarded during the 1993-94 school year. Over the last decade, an average of 6,800 athletes have participated in that sport annually. Also under Martin’s direction, the MHSAA’s Women In Sports Leadership Conference made its debut in 1989, and with attendance of upwards of 500 students, the every-other-year event remains the largest and longest-running conference promoting the roles of females in interscholastic athletics – not only as athletes, but as future administrators, coaches and officials. Martin administrated a number of other sports for the MHSAA and served on several National Federation of State High School Associations (NFHS) committees. Martin retired in December 2002.

► Gina Mazzolini came to the MHSAA in 1993 from the University Interscholastic League in Texas, where she served 11 years including five as an assistant director for the service organization to high school activities in that state. Mazzolini spent the majority of her MHSAA career as the administrator for girls volleyball, swimming & diving, alpine skiing and tennis and as the point person for foreign exchange and international student issues while also handling sanctioning of out-of-state competitions that included MHSAA member schools. She had a significant presence on the national level as well, serving on various NFHS rules and advisory committees, including as the chairperson of the volleyball rules committee. Mazzolini received a Citation from the NFHS in 2016, and also that year became the first woman to receive the MHSAA’s Charles E. Forsythe Award, which recognizes outstanding contributions to the interscholastic athletics community. She retired at the end of that July.

► Kathy Vruggink Westdorp came to the MHSAA as an assistant director during the 2003-04 school year after more than two decades serving as a teacher, coach and administrator in Grand Rapids-area schools. Westdorp received an NFHS Citation in 2021, and was named NFHS Coach Educator of the Year in 2015 for her work directing the MHSAA Coaches Advancement Program, an eight-level education program that has seen more than 16,000 coaches complete the first-level unit alone. Westdorp also guided the addition of girls lacrosse as an MHSAA-sponsored sport in 2005 and remains its administrator – and she has served as the NFHS Education Committee and Girls Lacrosse Rules Committee chairpersons among other national roles. She also serves as the MHSAA’s lead administrator of competitive cheer and gymnastics. Under her leadership, the WISL Conference has continued to thrive welcoming and training high school female student leaders from all over the state, and the Competitive Cheer Finals have ranked among the most highly-attended championship events offered by the MHSAA. 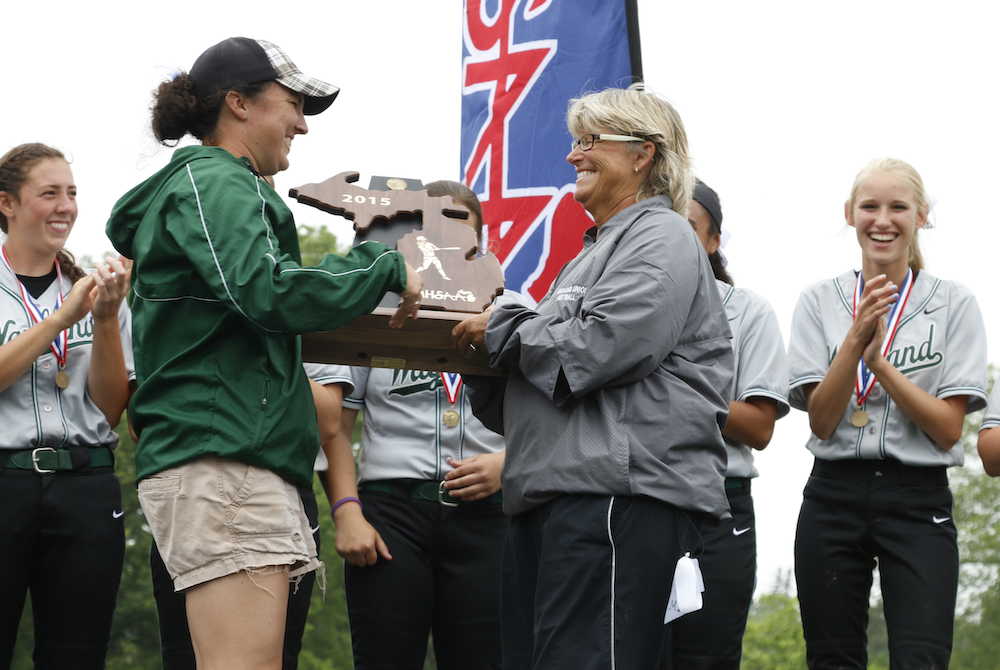 There is a crisis in Michigan schools today that centers on one problem:

Not having enough people.

In discussions with school district personnel, we are being told there has never been a more difficult time for finding people than today. All of us are searching high and low to find coaches for athletic teams, and officials, referees and umpires to administer those games in an orderly and safe way. Dig a little deeper, and school districts are desperate to find those willing to serve as substitute teachers and bus drivers.

Because of this current reality, we continue to be dumbfounded over the approval of Public Act 184 this past summer. This created a new set of retirement rules stipulating that a retiring teacher or administrator cannot be rehired to serve as a coach until after a nine-month waiting period. Even more frustrating: Individuals who had served as high school coaches for many years, who retired from the classroom last June but had planned to keep coaching for a few more seasons, are being told they cannot do so. Those coaches are sidelined, and for no sensible reason.

Cheri Ritz has been the varsity softball coach at Wayland High School since 1995. Cheri has won numerous championships, and has been a model coach and great leader of students throughout her career. Cheri retired as a teacher in June and planned to keep coaching the softball team for a few more years, making a small fraction of what her classroom salary was before retirement. Under the “old” retirement law, Cheri could have retired in June and been detached from the district for 30 days, and then returned and worked for the district in any capacity as long as she was making less than 30 percent of her compensation at the time of her retirement. Under PA 184, this scenario can no longer happen.

In the state of Michigan, we have hundreds of recently-retired school people who want to continue to be some of our best coaches, making pennies on the hour for their time. Now they simply aren’t allowed to do so because of a law that had no intention of impacting coaches and school sports. Cheri is just one example. The same issue has found several more longtime, successful coaches including Northville’s golf coach Chris Cronin and cross country & track field’s Steve Porter at Milan High School.

For the past few months, the MHSAA has met with the Office of Retirement Services, representatives from the Governor’s office and even the bill sponsor of PA 184. Every single conversation revealed the fact that coaches were not even part of the discussion when this new retirement law was passed. In other words, recent retirees continuing to coach were not the issue, but yet this new law now treats coaches as some sort of enemy with zero phase-in period, modification or even the ability to seek a waiver of this new law which became effective immediately on July 25, 2022. We have tried to work within the system to seek some commonsense approaches and solutions to this problem, but to no avail as of yet.

We need your help. We need you to contact the Governor’s office and your State Representative and State Senator’s offices. Let them know PA 184 needs to be fixed now. We need to find a way to let these individuals continue to coach and lead our student-athletes. Let them know our kids cannot play their games without individuals who want to coach, and let them know our kids will miss out on learning valuable life lessons if these coaches are not allowed to continue.

And let them know that PA 184 could not have been passed at a worse time given our most valuable resource – people – is at an all-time low.