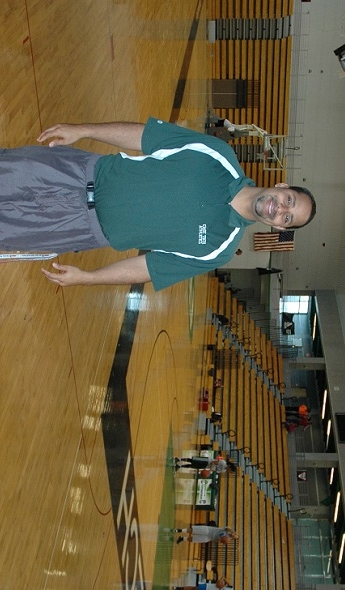 Edward Tomlin had it all. Or, at least, everything he wanted when he left Central State University in Wilberforce, Ohio, to launch himself into the real world.

“I was in sales. My big thing in college was that I wanted a company car, and a laptop, and I wanted to travel. That was it,” Tomlin recalled on a cold February morning this winter. “Well, 25 pounds later, I realized, ‘You know what? This is not all it’s cracked up to be.’ It was a lot of fun for a guy coming right out of college, but it really wasn’t meaningful.”

The erstwhile traveler is now firmly entrenched in a first-floor office at Detroit’s Cass Technical High School, selling the most precious of all commodities: opportunity to student-athletes.

He recalls going into work one day during his prior life and thinking there must be something else to do.

A phone call to his mother was all it took.

“She said, ‘Well then, quit.’ And, I quit, that day,” Tomlin said. “It’s funny because my mom told me before I left college I should get certified to teach, and I said, ‘Nah, I’m going into sales.’”

Well, mother knows best. In Tomlin’s case, both his mother, Jacqueline, and his father, Kern, were lifetime educators.

After beginning as a substitute teacher within a week after retiring his sales briefcase, he landed his first teaching gig at Detroit Crockett High School.

A solid golfer, Tomlin was never at a loss to find people seeking to fill out a foursome during his sales travels. So, he put that talent to use as the Crockett golf coach during that first year.

“I started to coach golf in the fall of 1994 and found that I enjoyed it,” Tomlin said. “Plus I got to hit my golf ball a little bit and show some kids that they could play.”

A year later, his coaching path took a duck-hook if ever there was one when he arrived at his alma mater, Cass Tech. It was then that one of his dad’s friends told Tomlin the Technicians needed help with girls volleyball.

“About all I knew was what I’d seen in the Olympics. So over the next three or four years I learned to coach volleyball, and we went from being a good program to a bad program,” Tomlin laughed, while adding that Cass Tech had just won an MHSAA Regional and had some solid individual talent when he stepped in.

“But, through MIVCA (the Michigan Interscholastic Volleyball Coaches Association), and some additional training and sports performance videos, I’ve turned into a better coach,” he added.

Such is Tomlin’s approach to administration. As he was trying to find his way during the early years, and continues to do to the present, he leaned on the network of people and resources available.

Tomlin had worked closely with long-time Cass Tech athletic director Robert Shannon, and early in his educational career was introduced to the Michigan Interscholastic Administrators Association by Doris Rogers, then AD at Crockett.

“I started going to MIAAA and taking leadership courses and training,” said Tomlin, now in his second year as Cass Tech’s AD. “It really opened up a side of interscholastic athletics that I had not been exposed to. Going to those conferences has really helped me to develop my philosophies and helped establish what we try to do here at Cass.”

There is so much more that he’d like to do, but like all ADs in the Detroit Public School League, there are time limitations.

“One of the things holding us back in the Detroit Public Schools is that our position has turned into a stipend position,” Tomlin said. “I’ve got five Algebra I classes, so I’m in class until 2 (p.m.) every day. The things that I really want to do with this program in terms of moving it forward by finding more sponsorships for new teams and facilities suffer a bit due to time.”

As such, much of the responsibilities placed on athletic directors at other schools statewide fall to the coaches in the PSL. Cass Tech has won two straight MHSAA Division 1 football titles, something other coaches at Cass aspire to do. But, warns Tomlin, there’s a price to pay.

“Everyone likes the end result of a state championship, but the support and the effort it takes to get there is totally on the coaches here. They deserve all the credit,” Tomlin said. “The coaches have huge tasks because, hey, your AD has five classes so you have to be really passionate about what you’re doing; if you’re not, this isn’t the job for you.”

Hiring the right coaches is paramount today, as expectations of parents and students seem to be at odds with reality.

“Parents’ and students’ expectations have changed so much. Everyone wants that scholarship, or this level of athlete, but are they willing to put in the work?” Tomlin said.

Tomlin knows a bit about parental expectations, and hopes to instill all he’s learned in daughter Montana (16) and son Chase (11) as they continue to enjoy athletic participation.

When it’s time, Tomlin might even try to sell them on a career in education, as his mother did to him years ago.

PHOTO: Detroit Cass Tech athletic director Edward Tomlin stands in his school's gymnasium. He returned to his alma mater as volleyball coach in 1995.

This is the fourth installment of a series, "Career Paths," focusing on the unsung contributions of athletic directors. See below for earlier installments.

Lowell’s Deanne Crowley, Owosso’s Dallas Lintner and Fenton’s Mitch Smelis all have provided more than two decades of service to Michigan educational athletics, Crowley as a highly-regarded coach and administrator, Lintner also as an administrator and educational leader and Smelis as an athletic trainer and prominent voice in the sports medicine community especially in its service to school sports.

To recognize their significant and continued contributions to educational athletics, Crowley, Lintner and Smelis have been named recipients of the Michigan High School Athletic Association’s Allen W. Bush Award for 2022.

Al Bush served as executive director of the MHSAA for 10 years. The award honors individuals for past and continuing service to school athletics as a coach, administrator, official, trainer, doctor or member of the media. The award was developed to bring recognition to people who are giving and serving without a lot of attention. This is the 31st year of the award, with selections made by the MHSAA's Representative Council.

Crowley began her coaching career at Lake Odessa Lakewood in 1987 with subvarsity basketball, and she took over Lowell’s girls varsity program in 2000 after previously beginning her teaching career there in 1998. She remained the Red Arrows’ coach through 2006, that season leading her team to the Class A Semifinals – and she also was named Class A Coach of Year in 2004 by The Associated Press. Crowley became an assistant principal at Lowell in 2010 and the high school’s athletic director in 2013.

She earned her certified athletic administrator designation from the National Interscholastic Athletic Administrators Association (NIAAA) in 2018 and was named Region 4 Athletic Director of the Year this past school year by the Michigan Interscholastic Athletic Administrators Association (MIAAA). Previously, she was named Athletic Director of the Year by the Michigan Wrestling Association for the 2018-19 school year and by the West Michigan Officials Association in 2021. Crowley also is a significant contributor to Lowell’s nationally-recognized Pink Arrow Pride program that raises funds annually for cancer awareness, education and support within the Lowell community; she organizes and coordinates the education program, which among other goals provides scholarships for Lowell graduates pursuing careers in medicine. She also was a co-founder in 2000 of the Lady Arrows Varsity Club, which provides leadership training for female student-athletes who have earned a varsity letter.

Crowley graduated from Lakewood High School in 1983 and earned her bachelor’s degree in secondary education from Western Michigan University in 1997 and a master’s in educational administration from Michigan State University in 2002.

“I have known Dee for over 20 years, and she has always been incredibly dedicated to finding opportunities for all students, especially female student-athletes,” Uyl said. “Her years as a coach and administrator have shown a solid record of finding ways for kids to compete.”

Education has been a focus of Lintner’s work, and he received a doctorate in educational leadership from University of Michigan-Flint in 2017. He has a certified master athletic administrator designation and has served as a leadership training instructor for the NIAAA since 2015. He also has served as a facilitator for the Love and Logic parenting program.

Lintner has been an active participant with the MIAAA as well, serving as its constitution committee chairperson since 2009. He was a member of the executive board from 2015-20, including serving as president during the 2018-19 school year. As athletic director, he was a frequent host of MHSAA postseason events and a contributor to various committees, and he previously was an MHSAA registered official for track & field and coach in multiple sports. Prior to earning his doctorate, Lintner graduated from Vassar High School in 1995, then earned a bachelor's degree in education from Saginaw Valley State University in 2000 and a master’s in athletic administration from Central Michigan University in 2005.

“Dallas has provided years of solid leadership in Owosso,” MHSAA Executive Director Mark Uyl said. “This consistent approach has led to numerous improvements, and during his tenure as athletic director his school won its first state championship, with the softball program (in 2021).”

Smelis has served as an athletic trainer for 25 years with Fenton Area Public Schools, for the last decade through NovaCare Rehabilitation. He was named High School Athletic Trainer of the Year by the Michigan Athletic Trainers’ Society (MATS) in 2017 and serves as co-chairperson of its Secondary School Committee.

Also a member of the National Athletic Trainers Association (NATA) and Great Lakes Athletic Trainers Association (GLATA), Smelis has become a key connection between the training community and MHSAA. He has contributed as a MATS liaison on multiple MHSAA sport committees, and serves on the Sports Medicine Advisory Committee and as an instructor for the MHSAA’s Coaches Advancement Program (CAP). He also has presented at the MIAAA’s annual and summer conferences on a variety of physical health and safety and mental health topics.

Smelis graduated from Imlay City High School in 1991 and earned a bachelor’s degree in sports medicine from Central Michigan University in 1997. He is a certified American Heart Association instructor for CPR, first aid and basic life support and has served as lead instructor in CPR and first aid for Fenton’s coaches and staff.

“Mitch has been incredibly dedicated to keeping kids safe while playing all sports,” Uyl said. “He also has been responsible for further strengthening the good relationship between the MHSAA and Michigan Athletic Trainers’ Society, and he continues to provide valuable insight as part of our coaches education efforts.”