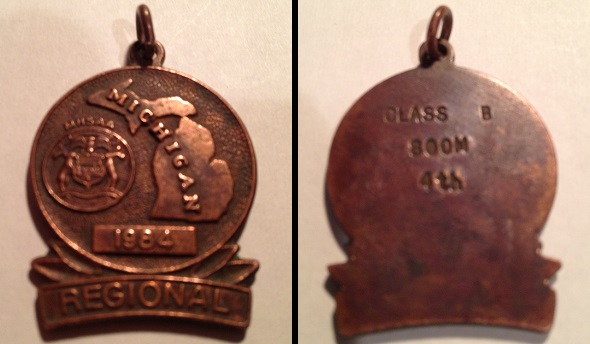 It’s not quite a needle in a haystack. But it could turn into a great story.

This 1984 MHSAA Regional medal, pictured above, was found recently in Massachusetts with a metal detector. The finder, coincidentally a former collegiate track and field coach, hopes to return the medal to its rightful owner.

Doing so might not be as difficult as it sounds, but we’ll need help from our friends in the track and field community.

Here’s what we know:

Unfortunately, we do not have Regional results from the 1980s on file in our office. That’s where our helpers come in.

If you have results, or any idea who won this medal, please contact me at Geoff@mhsaa.com. If we can connect medal with owner, we’ll tell much more of this story – including that of the coach who found it and made the call to start its return trip home.

5. WRESTLING Division 1 No. 7 Rockford finished the Ottawa-Kent Conference Red schedule undefeated with a 38-21 win over No. 9 Grandville – FOX 17