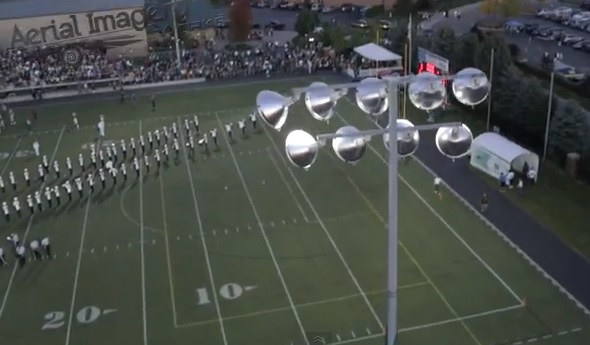 You’ve got to see this – from high in the sky – to believe it.

But the Irish will remember fondly (and probably click on frequently) the video of this sky high view of the game including the team’s entrance to the field.

Thanks to a camera attached to a helicopter-like apparatus flown by local Aerial Imagery Works, Notre Dame was able to capture a rarely-seen view. See more by watching the brief video embedded at the bottom of this post.

It's fair to assume few television stations in Michigan have been as dedicated to the local football team as South Lyon's SLC-TV, which will celebrate a milestone broadcast Oct. 11 when South Lyon faces South Lyon East.

SLC-TV has followed South Lyon football home and away games for 31 years and will broadcast its 300th game that night. SLC-TV’s games appear on WOW network channel 19 and Comcast Southfield channel 90, which reaches 33 communities in metro Detroit.

Sports director Tedd Wallace will have done play-by-play for 298 of those games, and said he believes no station in America has done TV broadcasts of a team’s home and away games as consistently. Check out more about the network’s weekly work on its Facebook page.

Friendly gesture to opponent in need

One of the most heart-warming parts of following high school sports is experiencing the camaraderie among athletes from opposing teams they likely know nothing about except for what they learn during competition.

Amazingly, Union City junior Marissa Mead played in her team’s match against Concord on Sept. 24 despite her home being destroyed by a fire that morning. As told by the Jackson Citizen-Patriot’s Leanne Smith, Concord’s players had heard about the tragic event and were surprised to then see Mead take her place as defensive specialist that night.

On the bus ride home, the Concord players decided they needed to do something to help Mead and her family. As a team, the players collected $80 – and then pushed the total to $300 with the help of teachers, parents and administrators. They delivered the funds in a card to Mead at Union City’s home match two days later.

It’s a gesture that might seem small, but speaks loudly to the awesome way our athletes relate to each other not just on, but off the court as well. Click to read the entire report.

Official of the Year

Marcy Weston, Central Michigan University’s Executive Associate Director of Athletics/Sports Administration and a longtime contributor to MHSAA officiating initiatives, has been named the Naismith Women’s College Official of the Year.

Weston spoke at the 2001 MHSAA Officials Banquet and has served as part of the association's officials committee and with the National Federation of State High School Associations as a liaison to its Basketball Rules Committee.