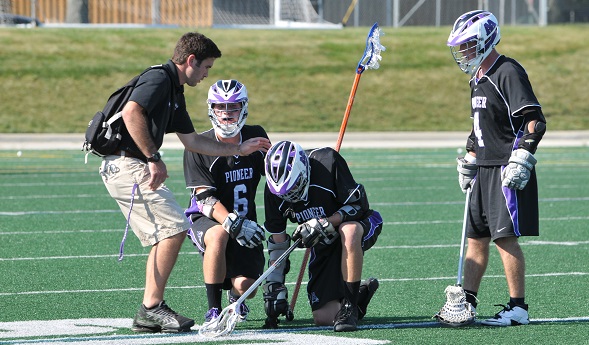 Tom Minter, recently retired from the MHSAA as assistant director, wore many hats while serving the Association and donned official’s gear in numerous sports outside of business hours.

But one of his finest refereeing efforts might have come during the 2009-10 and 2010-11 school years when he guided approximately 60 individuals representing 25 medical and professional organizations through an arduous process to upgrade the antiquated Physical Form to what is the standard today: the Pre-participation Physical Examination/Health History Form.

The form highlighted Stage 1 of the MHSAA’s 4 Hs of Health and Safety – Health Histories – and the current form is much more comprehensive, answering questions previously not asked during the quicker, more brief, evaluations.

Sudden cardiac death claims the lives of more than 300 Michigan children and young adults between the ages of 1-39 years annually. Yet, many of these deaths could be prevented through screening, detection, and treatment. One such way to detect high risk conditions that predispose to SCDY is through pre-participation sports screening of student-athletes, and the current physical form provides a mechanism.

While much more detailed, schools report that parents are more than willing to take the extra time and effort to complete the lengthier version.

“When the expanded form came out, people kiddingly made comments about its length; yet in today's day and age everyone understands we need all the information we can cultivate regarding health histories of our student athletes,” said Mark Mattson, athletic director at Traverse City Central.

Down state, feelings have been similar. “We don’t have a problem at all here,” said Anna Devitt, athletic secretary at Hartland High School. “Our parents take care of it, and haven’t balked at the length at all.”

Both agree, and are joined by many others across the state, that  the next logical step is for the form to be converted to a fillable, online document so that records can be accessed by those in need via mobile, laptop or desktop.

Thus, in the “No H left behind” mantra that the MHSAA has assumed, an electronic option of the Health History form is in the early planning stages.

“As an increasing number of our schools strive to be ‘paper-free,’ or at least as much so as possible, it is time to re-invent the delivery method for perhaps our most downloaded or distributed document,” MHSAA Executive Director Jack Roberts said. “Once again, as we move forward with our ‘Heart’ initiative for the coming school year, we are also intent on bringing other projects up to speed.”

The masses are certainly enthused.

“That would be heavenly. An online version that would prevent people from submitting the forms until all the required information was in place would be fantastic,” said Mattson, who has had to turn back, or hold out students while waiting for completed forms, whether at Marquette, Maple City Glen Lake, or his current post in Traverse City. “It’s always been the same; people move too quickly and overlook required fields. It would prevent two things: one, having to hold kids out while waiting for a signature, and two, prevent parents from having to drive in to the athletic office to sign or fill in that last field. We’d know we were getting a completed form.”

At Hartland, where athletic director Jason Reck created an online emergency contact form, a system is in place which allows coaches, administrators and trainers to share necessary data for all student-athletes in addition to the MHSAA forms.

“Our parents love the online emergency contact form, and we require them to fill it out every season, not just once a year,” Devitt said. “Sometimes an athlete gets injured during one season and the next season's coach wants to know about it.”

The information on the form is populated into an Excel spreadsheet which Reck, Devitt, the school trainer and all coaches can access. They can tailor the data by sport and pull it to their mobile devices.

“We’re trying to go completely paperless, and the MHSAA physical form would be another step,” Devitt said. “Our parents and doctor’s offices would love it.”