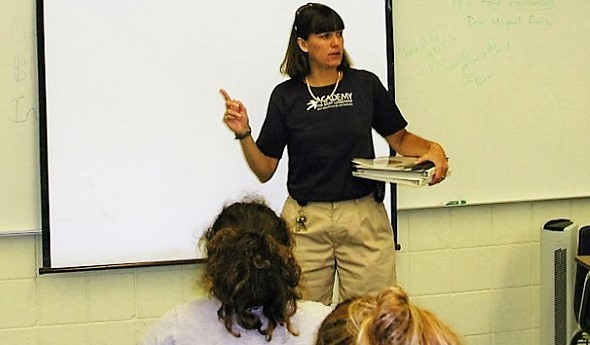 Meg Seng misses coaching – in her words, “those relationships really are what it’s all about … stronger than just about anything other than family.”

But the coach in Seng continues to show the way in her work every day.

Seng will be honored next month with the MHSAA’s 31st Women in Sports Leadership Award for her work at Ann Arbor Huron and Greenhills over more than 30 years in educational athletics.

The award also will recognize Seng’s teaching, training and empowering of the next generation of coaches and especially women aspiring to follow her into leadership positions in a field where they remain underrepresented.

“I’ve always loved sport, and early on found I had a knack and an interest in coaching. So to be able to share with other young women what I think is a really noble profession makes it a passion for me,” Seng said. “I think it’s a great endeavor, and I’d love for more women to have the opportunity and the confidence to seek out some of those positions.”

Seng will receive this year’s award during the WISL Banquet at the Crowne Plaza Lansing West.

Each year, the Representative Council considers the achievements of women coaches, officials and athletic administrators affiliated with the MHSAA who show exemplary leadership capabilities and positive contributions to athletics.

Seng is in her 28th year at Greenhills School, serving as the athletic director the last 15 after 13 teaching physical education and health. Previously a scholarship athlete playing both volleyball and softball at Indiana University – and winning a pair of Big Ten championships on the diamond – Seng coached both sports at Ann Arbor-area high schools over nearly two decades and has continued as a role model for emerging coaches.

“I’m pretty sure I’ve been to every single (WISL) conference, and so for years, I’ve certainly been in the audience watching these great women be recognized,” Seng said. “To have followed for that long and now be on stage, it’s a tremendous honor for me – that group of women and their value to sport in Michigan is not lost on me at all. I truly respect that group, and I’m really proud to be part of it.”

A 1977 graduate of Maine South High School in Park Ridge, Ill., Seng began coaching at the college level after her playing days with the Hoosiers were done. She served first as a graduate assistant softball coach at Louisiana Tech University in 1983-84 while studying for her master’s degree, and then as a softball assistant at Illinois State University for 1984-85.

Seng took over the Ann Arbor Huron volleyball program in 1985, and over 12 seasons stretching two tenures led her team to five league titles and a District championship in 1993. She also served as Huron's co-head varsity softball coach from 1986-90.

She completed her teacher certification at Eastern Michigan University in 1990 and began teaching at Greenhills that year, later coaching that school’s varsity volleyball team from 1993-2000 and leading the Gryphons to a District title in 1997.

In 2001, Seng co-founded The Academy of Sports Leadership (TASL), a non-profit organization that provides education and training for women interested in becoming coaches and hosts a five-day residential camp for high school girls with that aspiration. In 2003, Seng became Greenhills’ athletic director and began her work as well contributing to the Michigan Interscholastic Athletic Administrators Association (MIAAA) and National Interscholastic Athletic Administrators Association (NIAAA), serving on committees for both including as part of the MIAAA’s Leadership Academy faculty since 2011 and the NIAAA’s certification committee since 2014. She served as the MIAAA’s Executive Board president in 2013-14.

At Greenhills, Seng has hosted more than 20 MHSAA tournament events in various sports at the District, Regional and Quarterfinal levels, and she’s served on a variety of MHSAA committees as well as currently the Multi-Sport Participation Task Force. She also is an instructor for the MHSAA Coaches Advancement Program.

“Meg Seng has been a leader at every level of educational athletics – as an accomplished coach, respected athletic director and someone who empowers women interested in following her lead and filling the need we have in school sports for more women in all forms of leadership positions,” MHSAA Executive Director John E. “Jack” Roberts said. “She personifies the Women In Sports Leadership Award, and we’re delighted to present her with this honor.”

In addition to her work with The Academy of Sports Leadership, she’s served since 2009 on the board as a founding member of the Michigan Softball Academy, which annually raises money for the American Cancer Society. She is published for her work in coaching education and recruitment and has spoken on various occasions on ways to provide opportunities for young women in coaching. She will present on recruiting and retaining female leaders at the annual statewide MIAAA conference this March. 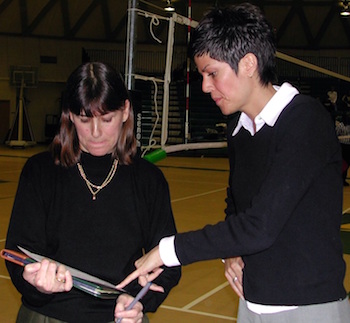 “Meg sees a need and takes initiative to put a committee, group or process in place to solve and satisfy this need,” Holly athletic director Deb VanKuiken said in her letter recommending Seng for the WISL Award. “I truly respect and admire her. She has a great mind and a great heart for athletes and coaches alike. She leads, and she serves.”

Seng monitors coaching at the high school and college levels, and has watched the percentage of female coaches at the college level fall drastically since Title XI. She also hears a few things – from women finishing college athletic careers who don’t feel qualified to coach, and also from athletic directors who would love to hire women coaches but aren’t finding candidates.

“Our Academy is a grassroots organization just trying to get young girls to follow that dream and show them the possibilities,” Seng said. “It’s a primer on coaching; we show them all the things coaches do and hope it sticks, that they say, ‘I can do that.’

“Part of what we do is try to empower them to take some of those risks.”

In addition to the MIAAA and NIAAA, and NAGWS, Seng is a member of the National Association for Sport and Physical Education (NASPE) and American Alliance for Health, Physical Education, Recreation and Dance (AAHPERD).

The first Women In Sports Leadership Award was presented in 1990

PHOTOS: (Top) Ann Arbor Greenhills athletic director Meg Seng instructs in the classroom; she taught at Greenhills for 13 years and continues teaching as part of  CAP and the Academy of Sports Leadership. (Middle) Seng, left, also was a successfull volleyball coach at Ann Arbor Huron and Greenhills. (Photos courtesy of Meg Seng.) 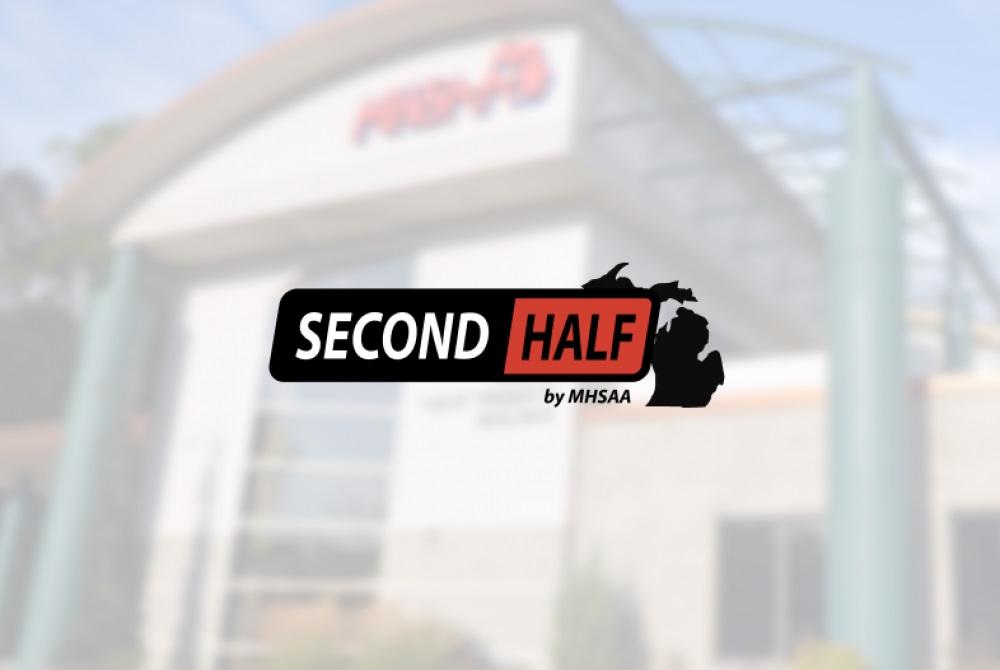 The beginning of a school year always is accompanied by at least a handful of notable playing rules changes or adjustments regarding MHSAA Tournament competition. Among the most noteworthy this fall will be the addition of a “third half” rule in soccer, which will allow an athlete to play in a combined three halves across two matches and multiple levels (varsity, junior varsity, freshman) on the same day, any day of the week. This is similar to the fifth-quarter rules in football and basketball approved in recent years to help programs with low athlete numbers still have enough to continue fielding teams at multiple levels – generally with underclassmen playing on multiple teams to keep rosters filled.

There is also an enhanced penalty beginning this fall for violating the fifth-quarter or third-half rules: Violators must forfeit the contest during which the violation took place (either varsity or subvarsity), and that head coach in violation will be ineligible for the next day of competition.

The change to a playing rule most likely to be noticed by spectators comes in football, where intentional grounding has been adjusted to allow for a passer to throw an incomplete forward pass to conserve yardage – in essence, to throw the ball away to avoid being tackled for a loss, even when a receiver isn’t present near the pass’s destination – if the passer is outside the free-blocking zone, or “pocket,” and as long as the pass reaches the line of scrimmage or extension of the neutral zone beyond the sideline. This change makes the high school intentional grounding rule mirror those at the collegiate and professional levels, and was made to conserve the amount of contact by defensive players with passers.

A second football rule change also was made with safety in mind, as the chop block – which is illegal – was redefined to include any combination block by multiple teammates against the same opponent where one of the blocks is above the waist and the other is below the waist. Previously, the knee (instead of the waist) was the determining factor on a chop block. This change also is expected to assist officials in enforcing the rule because deciding if blocks occur above and below the waste is more straightforward than using the knee to decide if an infraction occurred.

Another football rule change will be noticeable during the MHSAA 11-Player Finals, as head coaches for the first time will be allowed one challenge per game, with the play in question then reviewed with video replay. The challenge will cost that team a timeout if the original outcome is confirmed. Coaches will be allowed to challenge the following: complete/incomplete passes, if a runner/receiver was in/out of bounds, a runner who is ruled not down, the forward progress spot as it relates to the yard to gain, which player first touched a kick, the recovery of a ball in/out of bounds, if a pass was forward or backward, and penalties for illegal forward pass, targeting or illegal helmet contact, and pass interference only as it relates to the pass being previously tipped. All potential scores and turnovers will remain automatically reviewed by replay booth officials.

There is a new qualification process for divers seeking to advance to Lower Peninsula Finals. In each of the three divisions, each Regional will be guaranteed 10 qualifiers for the Finals, with six more “floating” qualifier entries to be distributed to the Regionals that have one of the previous year’s top six returning Finals divers in their fields. If a team changes division from the previous season, any floating top-six spots are added to the six already allowed in the school’s new division.

In golf, the maximum number of strokes allowed per hole during MHSAA Tournament play has been reduced from 12 to 10. Also, teams will be allowed two school-approved coaches to be present and actively coaching during postseason rounds.

In tennis, the number of players who may be seeded at No. 1 singles was increased to seven if there are between 21-23 players in the field, and eight if the field includes 24 or more players at that flight. The No. 1 singles flight is the only flight that allows for individual qualifiers from Regional play, often making it larger than the other seven flights at the Finals.

The 2022 Fall campaign culminates with postseason tournaments beginning with the Upper Peninsula Girls Tennis Finals during the week of Sept. 26 and wraps up with the 11-Player Football Finals on Nov. 25 and 26. Here is a complete list of fall tournament dates: