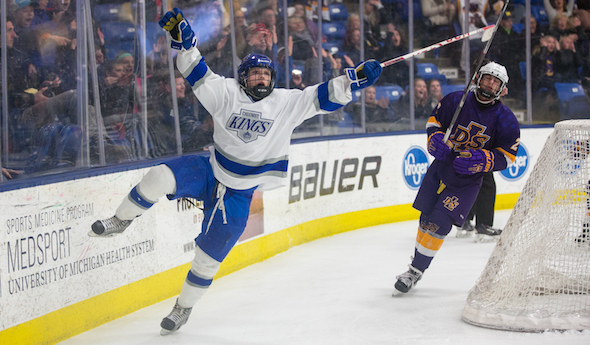 Conquest Conquers Shamrocks - What proved to be the game-winning goal of the Division 1 title game for Brighton came from Adam Conquest early in the second period while the Bulldogs were playing short-handed. It made the score 3-0 at the time.

Goal West! CC Back In The Game - In a mad scramble in front of the net to start the third period, Detroit Catholic Central's Brendan West scores the first of his two goals in the game and pulls his team back to within a goal of Brighton at 3-2.

Moore Gets More For Warriors - Garrett Moore had two goals for Birmingham Brother Rice in the Division 2 title game. Both came in the final period, the first when he picked up a loose puck following a power play.


Reinhart Scores Short Handed - Playing 3 on 5, Brother Rice's Jack Reinhart steals the puck and scores for the Warriors in the third period.

First Shot - First of Three Goals For Hernandez - Warren DeLaSalle made its first shot of the Division 3 Final count against Calumet. Austin Scott finds Thomas Hernandez on the breakaway – the first goal of a hat trick game for Hernandez.

Lucky Bounce Tightens Things Up - Calumet pulls back to 4-2 against Warren DeLaSalle in the second period when a shot by Izaak Avery takes a nasty bounce off the boards and ends up in the net.