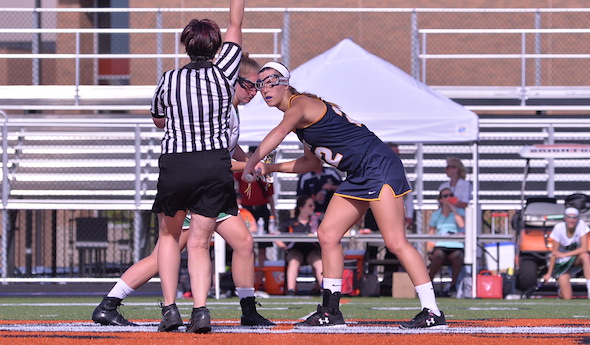 Three teams maintained their winning ways at the MHSAA Lacrosse Finals on June 11, as Birmingham Brother Rice, East Grand Rapids and Rockford all successfully defended their titles in games played in Brighton and Howell.

Below are links to video highlights from Saturday’s games. Click on the final scores to watch games in their entirety and purchase DVDs.

Great Scott - Birmingham Brother Rice and Detroit Catholic Central traded goals for most of the first half of the Division 1 Final, but Brother Rice took a 5-4 halftime lead on a goal off a restart by Ryan Scott.

Shamrocks Keep It Close - Detroit Catholic Central pulls closer in the fourth period against Brother Rice on this goal from Brennan Kamish.

Hallock Hammers It - Tanner Hallock of Grand Rapids Forest Hills Central scored the first two goals of the Division 2 championship game against East Grand Rapids, the first coming on this blast with 8:31 remaining in the first period.

Stachler Steals One - Birmingham United jumped out to a 4-0 lead on Rockford midway through the first half of the Division 1 title game. The fourth goal came when Jena Bazil steals the ball from Rockford's goalkeeper, and Anna Stachler converts on the turnover.

Mac Attack - Rockford scored the last four goals of the game against Birmingham United; the second off a restart by Mekenzie Vander Molen proved to be the game winner.

Houle Stones Waechter - In the final minute of the Division 1 Final, Birmingham United's Abbie Waechter breaks loose for a 1 v. 1 on Rockford goalie Briana Houle, who makes the big save to preserve the lead.

Elliott to Duca - East Grand Rapids opened up a six-goal lead in the second half. The goal that proved to be the game winner came from Auden Elliott with the assist by Lindsay Duca, who had eight assists on the day, one short of a Finals game record.