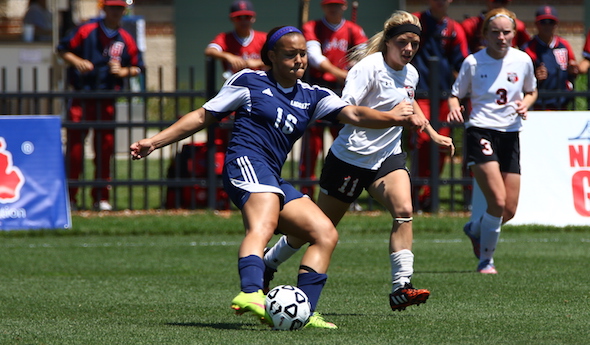 There wasn’t a lot of scoring, but the first day of the MHSAA Girls Soccer Finals at Old College Field produced a lot of excitement.

Below are links to video highlights from Friday’s games. Click on the final scores to watch them in their entirety and purchase DVDs.

Cougars Convert PK - The only goal of the Division 1 Final between Rochester Hills Stoney Creek and Canton came on this penalty kick with 10:56 left in the game by Stoney Creek's Emily Solek.

Dangerous Corner Headed Away - In the second half, Montrose had an opportunity on a corner kick headed away by Teagan Cornell of Grosse Pointe Woods University Liggett.

Right On Rush - In overtime, Grosse Pointe Woods University Liggett had a great scoring opportunity on a free kick by Kate Birgbauer, but Montrose keeper Alexis Rush was up to the task and stopped the shot.