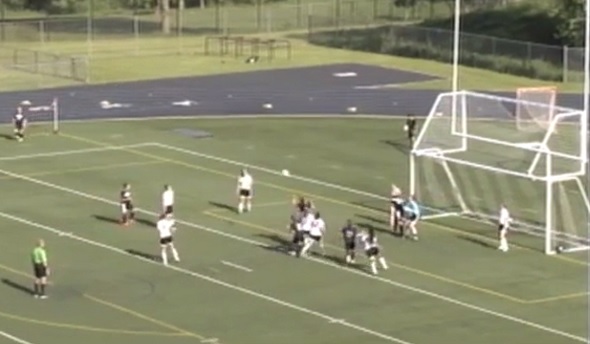 Jackson Lumen Christi, Flint Powers Catholic, DeWitt and Spring Lake were among those that advanced to Girls Soccer Regional Finals with wins Wednesday.

Below are highlights from their victories taken from broadcasts on MHSAA.tv. Click the headings for each to watch.

Lumen Scores Late In First Half The Titans scored both of their goals against Leslie in this Division 3 Girls Soccer Regional Semifinal in the first half. Mallory Hestwood gets the second one late in the period.

Sophie Scores For Powers Midway through the first half, Flint Powers Catholic picked up its first goal against Lake Fenton when Sophie Bubnar scored on a rebound.

Persistent Powers Flint Powers Catholic gets its second goal of the game against Lake Fenton early in the second half with Rachel Phillpotts taking the centering pass to score.

Bubnar On The Follow Sophie Bubnar picked up her second goal of the night for Flint Powers on a rebound.

Dawes Does It For DeWitt DeWitt's first goal came off the foot of Mackenzie Dawes in this Division 2 Girls Regional Soccer Semifinal against Grand Rapids Northview.

Bishop With The Second Panther Goal Taylor Bishop gets a breakaway on this through ball to give DeWitt a 2-0 lead.

Stephan On The Header DeWitt's third goal came off a corner kick. Danielle Stephan heads the ball into the net.

Bishop & Dawes Split The Defense Watch Mackenzie Dawes and Taylor Bishop split the Northview defense with crisp passing as Bishop gets her second goal of the game for DeWitt.

Bishop Finishes Things Off Taylor Bishop gets the fifth and final goal for DeWitt – and her third of the game – taking a pass down the middle of the field.

Northview On The Board Olivia DeShane goes to the far post with this long ball to get the only goal of the game for Grand Rapids Northview against DeWitt.


Lone Laker Goal Kayla Krueger scores on a rebound for the only goal of the game in Spring Lake's 1-0 win over Midland Dow.