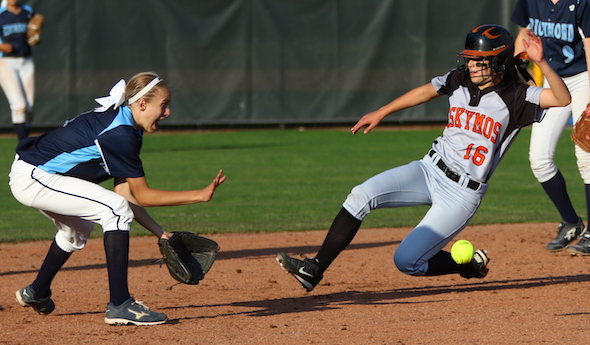 The first day of the MHSAA Baseball/Softball Semifinals at Michigan State University’s Old College Field began under rainy conditions Thursday, but finished under a flourish of sunshine as four teams punched their tickets into Saturday’s Finals.

Below are links to video highlights from Saturday’s games. Click on the final scores to watch games in their entirety and purchase DVDs.

West Scores First - In the third inning, Traverse City West gets on the board with an RBI single by Gavin Gamhausen to score Nick Brzezinski.

Eagles Take The Lead - Hartland scored twice in the fifth inning to take a 3-2 lead, with John Baker delivering an RBI single.

Hovde Delivers - With the score tied at 3-3 in the bottom of the fifth, Saline's Richard Hovde delivers a two-out bases-loaded single to drive in two runs, which proved to be the winning margin.

DeWitt Goes On Top - DeWitt took a 3-2 lead in the bottom of the fifth when Donovan Tarn doubled into the gap to score Michael Stygles.

Chalk Chaser - Ryker Rivera hits the third base line with this run scoring single in the fourth inning to give Linden a 4-1 lead.

Koan Drives Two Home - Linden gets on the board in the third inning with this two-out, bases loaded single by Nick Koan.

Dakota Double - The big hit in the Division 1 Semifinal between Macomb Dakota and Midland was this two-run double by Dakota's Julia Salisbury in the third inning to give the Cougars a 4-0 lead.

Gross Triples & Scores - Midland countered with two runs in the top of the fourth on this triple by Julia Gross to plate one run, and Gross then scored on a throwing error.

Swinehart Has A Big Game - Mackenzie Swinehart of Mattawan went 3 for 4 against Farmington Hills Mercy, scoring twice and driving in a run with this third-inning triple.

Helping With A Homer - Livonia Ladywood starting pitcher Rozlyn Price helped her own cause in the third inning with a two-run home run to center field against Vicksburg.

Bulldogs Begin Their Rally - Vicksburg started its rally back with two runs in the third inning. Alicia Cagney singles home the first run.

Eskymos Take Advantage - Escanaba tied the game at 2-2 in the second inning when Kathleen Ross scored on a Richmond error.

Richmond Tacks One On - Rachel Leach finishes the scoring for Richmond against Escanaba with a run-scoring single in the seventh inning, one of her two hits in the game.

PHOTO: An Escanaba runner tries to beat a throw to second base during her team’s Semifinal against Richmond.