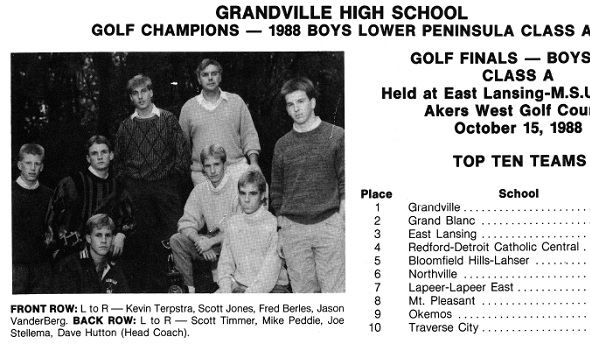 Dave Hutton had stepped away from the hockey program he’d started at Grandville High School more than a decade before when he was asked to come back and save it from extinction.

The team had struggled with low student interest – not to mention decreasing skill – and was under consideration to be eliminated in 1991. So Hutton volunteered to start over again. Order returned, the team quickly became successful and never had a losing season under Hutton before he retired from the sport in 2002.

He’s the first to say he was just one person who assisted in reviving the program. But he also served as an example – a common role he and Jim Gilmore surely shared during careers that have earned them this year’s Michigan High School Athletic Association’s Charles E. Forsythe Award

“It’s been important to me to do it properly; that’s how basically I always looked at it,” Hutton said of being a high school coach. “I was trained well by a lot of mentors, and consequently I tried to do things first class.

“When it comes down to being a coach, you set an example for fellow coaches. But more importantly, you want the athletes and parents to have a positive reaction to what you do, be proud of the program they are part of.” 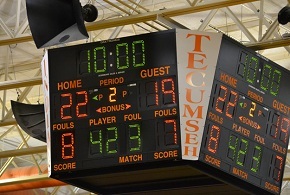 The annual award is in its 36th year and is named after former MHSAA Executive Director Charles E. Forsythe, the Association's first full-time and longest-serving chief executive. Forsythe Award recipients are selected each year by the MHSAA Representative Council, based on an individual's outstanding contribution to the interscholastic athletics community. Hutton and Gilmore will receive their honors during quarter breaks of the MHSAA Class A Boys Basketball Final on March 23 at the Breslin Student Events Center in East Lansing. Gilmore will receive his award during the break between the first and second quarters, and Hutton will receive his during the break between the third and fourth quarters.

Gilmore and Hutton have made contributing to Michigan high school athletics their lives’ work over the last four decades. Gilmore served four school districts over a 37-year career before retiring in 2008. He coached and taught at his alma mater Grant High School before moving on and eventually serving as athletic director at Kalamazoo’s Barbour Hall Academy (while also assisting at Kalamazoo Hackett Catholic Central High School). He was the athletic director and coached at Morenci High School and then served as athletic director at Tecumseh High School. Gilmore was named to the Michigan High School Football Coaches Association Hall of Fame in 2004 and also served that school year as president of the Michigan Interscholastic Athletic Administrators Association.

Hutton, 64, has coached the Grandville High School boys golf team for 42 seasons and also started and led the ice hockey program for 18. His golf teams have posted a 520-180-9 dual meet record, made the MHSAA Finals 20 times and won Class A MHSAA championships in 1976 and 1988. His hockey teams over two stints as coach amassed a record of 212-189-23 with two Regional titles and a Division 1 Semifinal appearance in 2001, his second-to-last season coaching that sport.

“Jim Gilmore and Dave Hutton have made long-standing contributions to their respective sports and communities. Their dedication and high regard for school athletics are signified by their decades of work,” MHSAA Executive Director John E. “Jack” Roberts said. “Their continued efforts – Dave Hutton as a coach and MHSAA Finals director, and Jim Gilmore with the MIAAA – show that for both, this is a life-long commitment. We’re proud to honor Jim Gilmore and Dave Hutton with Forsythe Awards.”

Gilmore, 65, coached football for 25 years at Grant, Barbour Hall and Morenci, and baseball for 15 seasons.  He served on MHSAA site and officials selection committees for seven sports and as president of both the Tri-County Conference and Southeastern Conference. He was instrumental in renovations during his tenures at Morenci and Tecumseh and also wrote the athletic code book that established academic standards for Morenci athletes.

Gilmore also has volunteered in various capacities in his church and communities, and remains active in the MIAAA as part of the past presidents council and the awards and lifetime member committees.

Hutton retired from the classroom in 2010 after teaching math and science at the elementary and middle school levels at Grandville for 41 years. He also has impacted his local golf community as a United State Golf Association junior tournament director and Professional Golf Association co-chairman of “Club for Kids” for Kent County.

“There’s still this satisfaction in seeing players in either sport be successful and continue to enjoy the sport when they’ve left (high school),” Hutton said. “There are times when kids say they’ve had enough of that. But it’s nice to see, just being a part of their growth in a sport as it continues beyond, whether they play in college or even as an adult in a rec league or church league, that they enjoyed it and learned something when you were their coach.”

Past recipients of the Charles E. Forsythe Award:

PHOTOS: (Top) Grandville boys golf coach Dave Hutton appeared with his 1988 team in the MHSAA's 1988-89 Book of Champions. (Below) The Tecumseh scoreboard hangs in the gymnasium Jim Gilmore once called home; he led renovation efforts during his tenure as athletic director. (Photo courtesy of Tecumseh High School.)