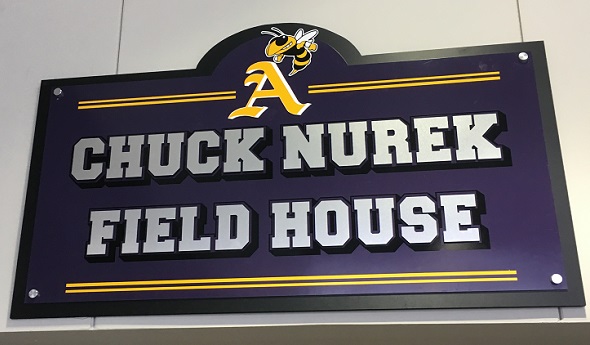 And thankfully, there were veterans like Auburn Hills Avondale’s Chuck Nurek to show him the ropes.

“Chuck was a gracious mentor taking the time to encourage, support and, at times, direct a ‘newbie,’” wrote Heitsch in recommending Nurek for the MHSAA’s Charles E. Forsythe Award. “Chuck has a passion and dedication for the Avondale interscholastic athletic program and high school sports in general. … Chuck had dedicated his life service to not only the students in Avondale but to bettering the student-athlete experience for everyone in Michigan.”

That career of service, and especially dedication to the training and educating of athletic directors and coaches throughout Michigan, has earned Nurek this year’s MHSAA annual honor for outstanding contributions to the interscholastic athletics community.

The Charles E. Forsythe Award is in its 40th year and named after the MHSAA’s first full-time and longest-serving chief executive. Forsythe Award recipients are selected each year by the MHSAA Representative Council. Nurek will receive his honor during the break after the first quarter of the MHSAA Class A Boys Basketball Final on March 25 at the Breslin Student Events Center in East Lansing.

Nurek served as athletic director at Auburn Hills Avondale High School from 1978-1999 after previously serving as assistant athletic administrator beginning in 1968. In addition to his leadership at that school – Avondale named its fieldhouse after him in 2012 – Nurek also was active in county and league leadership and statewide as part of the Michigan Interscholastic Athletic Administrators Association (MIAAA).

In all three roles, Nurek helped to provide tools, training and mentoring for those charged with directing high school sports programs and teams. One of his far-reaching impacts came as a longtime member and chairperson of the MIAAA Convention Program Committee, growing and planning an event that regularly draws more than 500 athletic directors, secretaries and assistants. Nurek also served as an early steering committee member of the MHSAA coaches education program that has evolved to educate and certify thousands over the last 30 years.

“Chuck Nurek has dedicated decades to educational athletics and particularly to the training of those who in turn lead our programs in their daily pursuits,” MHSAA Executive Director John E. “Jack” Roberts said. “He has impacted multiple generations of school leaders in our state, both through his assistance in building up our coaches education and then his work in making the MIAAA conference one of the most valuable teaching tools of its kind. We’re pleased to present Chuck Nurek with the Charles E. Forsythe Award.”

Nurek coached varsity basketball, cross country and subvarsity football at points during his Avondale tenure, and also taught physical education for all but the final few years of his time as an athletic administrator.

It was during his time as athletic director that Nurek saw the need for education, both to combat heavy turnover among school athletic directors and also to provide framework for an influx of coaches who did not work fulltime in schools.

He first began in coaches education as part of a small group of athletic directors building a program for Oakland County. That group merged with another, and in 1987 Nurek contributed in the creation of what became known as the MHSAA’s Program of Athletic Coaches Education (PACE), the predecessor of the current Coaches Advancement Program (CAP). 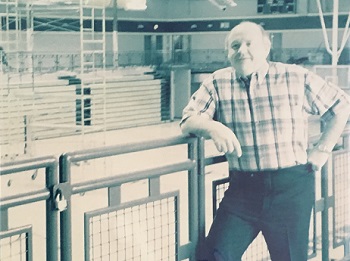 A frequent past speaker at MHSAA athletic director in-service programs, Nurek also served as part of an MHSAA mentoring program that paired veteran or retired athletic directors with new administrators. And he played a significant role in designing the MIAAA convention, which includes various training sessions for high school and middle school athletic directors, their assistants and secretaries while also serving as a significant source for networking and professional development.

“Just being able to work with all the great people over the years that I worked with, whether it be the leaders in Oakland County or leaders at the MIAAA,” Nurek said of his favorite memories over four decades, “and especially just the outstanding people on the conference committee, putting together one of the best conferences in the country.”

Nurek also served as part of the MIAAA’s State Sportsmanship Committee and Exemplary Athletic Programs Committee and as a representative to the 5 State Exchange Committee, chairing that group for a year.

At Avondale, Nurek co-sponsored a successful Substance Abuse Awareness Conference and organized a group of students to develop standards for sportsmanship both for the student body and the school’s parent group as well. At the league level, Nurek served as North Oakland Activities Conference president in 1980 and Metro Conference president from 1986-87, and later as president and secretary of the Macomb-Oakland Activities Conference. He also created a program to recognize academic excellence both for his league and all of Oakland County.

He graduated from Avondale in 1958 and then earned his bachelor’s degree in education from Northwest Missouri State University in 1966. He also earned a master’s in education from Eastern Michigan University in 1971 and received Certified Athletic Administrator certification from the NIAAA in 1994. Nurek maintained a strong presence in the Avondale community, speaking at the district’s annual parent fairs and serving as a board member of Auburn Hills’ Boys Club for a decade. Nurek also was involved with the local Little League program for a number of years and worked as part of the Avondale football scholarship golf outing committee.

PHOTOS: (Top) A sign over the doors at Auburn Hills Avondale's gym announces the former athletic director for which it is named. (Middle) Chuck Nurek stands for a photo inside the building named after him. (Photos courtesy of Avondale High School.)