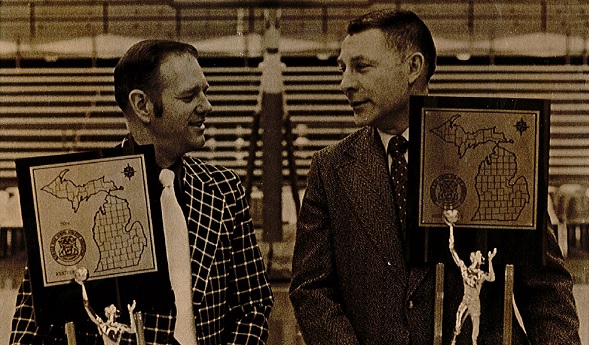 Jack Roberts always was astonished at the amount of detail his predecessor Vern Norris could recall about the people he’d met over many years contributing to high school athletics at the state and national levels.

When the Michigan High School Athletic Association executive director last spoke with his predecessor, Norris had been in contact with past counterparts from Kansas, Iowa and the National Federation – although Norris had retired from the MHSAA more than three decades ago.

“He was genuinely interested in people and their backgrounds and their families,” Roberts said. “He had good friends. He was good at being a friend, and colleague. I think he genuinely cared about relationships between people.”

And he built many over 23 years at the MHSAA office.

Norris, who led the MHSAA from the fall of 1978 through the summer of 1986, died early Monday morning in Lansing. He was 89.

Norris brought to the MHSAA a wealth of experience having coached at Traverse City, Rockford and Hillsdale high schools. He served as Assistant Director of Placement at Western Michigan University for the five years prior to joining the MHSAA staff, and during that time Norris built a reputation as a highly-regarded game official in the Kalamazoo area – and worked as a referee during the 1963 MHSAA Class A Boys Basketball Final.

Norris served on a number of national rules-making bodies during his 23-year tenure with the MHSAA, and as president of the Executive Board of the National Federation of State High School Associations (NFHS) during the 1983-84 school year. But he was best known for his work with Michigan’s coaches and especially officials. An award bearing Norris’ name is presented by the MHSAA each spring to a veteran official who has been active in a local officials association, has mentored other officials, and has been involved in officials’ education. The award has been given since 1992 at the annual Officials’ Awards & Alumni Banquet, which was begun during Norris’ tenure in 1980.

“Vern was respected and admired widely by contest officials, and it was because of that that I asked the Representative Council to approve an award for leaders who were especially involved in mentoring and training officials,” said Roberts, who succeeded Norris in 1986. “A total of 26 officials have received the Norris Award, and more than 10,000 officials have been honored at our annual banquet recognizing a group of contributors especially close to his heart.”

Norris shepherded a number of key advances during his tenures both as associate and executive director. The early 1970s saw the addition of MHSAA tournament events in girls sports, and football playoffs were added in 1975. Membership also grew during his time with the association; the MHSAA had 682 member high schools at the start of 1963-64, and 713 when Norris stepped down.

He served on the NFHS Executive Board representing Michigan’s section of five Midwestern states during a four-year term that concluded with his year as president, and he also served as chairperson of the NFHS Telecommunications Committee in 1972.

After leaving the MHSAA, Norris served as Commissioner of the Great Lakes Intercollegiate Athletic Conference from fall of 1987 through the close of the 1991-92 school year. 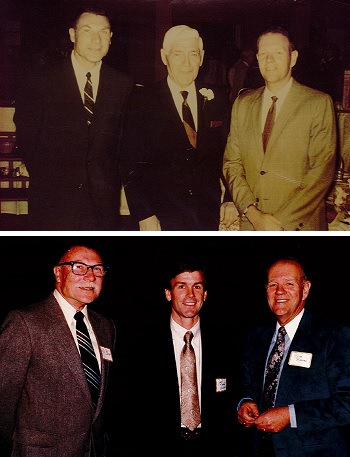 In retirement, Norris kept in touch with MHSAA staff. He and Roberts spoke every few months throughout the years. And, “he could not have been more gracious when he retired and I was hired. He gave me total support and just the right amount of advice,” Roberts added.

When Norris announced he was leaving the MHSAA early in 1986, then-Lansing State Journal Prep Editor Bob Gross wrote “his integrity is beyond question. He has never shown favoritism to a school, and he has never bent the rules. It’s always been strictly business, exactly what it should be. … That’s why I liked Vern Norris so much. He has always been fair.”

A graduate of Grand Rapids Godwin Heights High School, Norris earned his bachelor’s degree in physical education from Western Michigan University and a master’s in school administration from the University of Michigan.

In addition to his MHSAA and NFHS work, Norris served as a football or basketball rules clinician in various states and multiple provinces of Canada, and served on amateur basketball’s rules-making body at the time – the National Basketball Committee of the United States and Canada – from 1972-76. He contributed during the late 1960s and 1970s on the National Alliance Basketball Advisory and National Alliance Football Rules committees. Norris also served on the United States Olympic Committee’s House of Delegates in 1985.

A Service of Coronation will be held at 11 a.m. Friday at Trinity Lutheran Church in Lansing, with family receiving friends from 2-4 and 6-8 p.m. Thursday at Estes-Leadley Greater Lansing Chapel and at 10 a.m. Friday at the church.