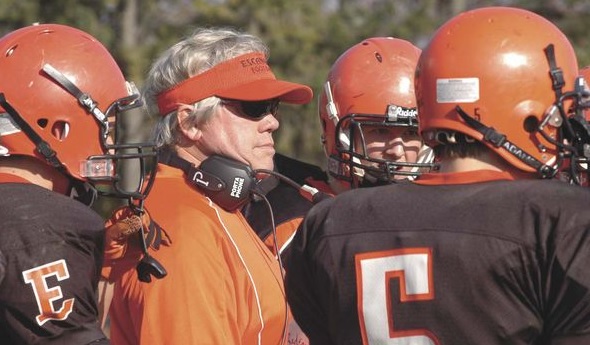 For more than 40 years, Escanaba’s Dan Flynn has served in just about every role possible in educational athletics. He’s lent his expertise to every group involved with sports at the high school level.

But above all, he’s made sure to advocate for those at the center of our games – the student-athletes taking part.

Flynn has coached, officiated and served as an athletic director, and also was a longtime member of the MHSAA Representative Council. In recognition of his contributions – and the voice he so often provided for those playing sports – Flynn has been named the 2014 recipient of the MHSAA's Charles E. Forsythe Award.

"My focus has been taking care of kids and helping kids have success. It's the essence of education, the essence of coaching," Flynn said. "The coaches help, the schools help, the parents help provide the programs. But the reason is the kids.”

The annual award is in its 37th year and is named after former MHSAA Executive Director Charles E. Forsythe, the Association's first full-time and longest-serving chief executive. Forsythe Award recipients are selected each year by the MHSAA Representative Council, based on an individual's outstanding contribution to the interscholastic athletics community. Flynn will receive his honor during the break after the first quarter of the MHSAA Class A Boys Basketball Final on March 22 at the Breslin Student Events Center in East Lansing.

Flynn, 67, joined the staff at Escanaba High School as a teacher and coach in 1971 and eventually served as the varsity wrestling coach from 1973-84, varsity football coach from 1985-2011 and varsity boys track and field coach from 1992-2002. He also served as athletic director from 1983-96 and an assistant principal for five years.

Flynn also represented the Upper Peninsula as an elected member of the MHSAA Representative Council from 1988-2010 and worked on the Council’s Executive Committee.

“He’s a coach at heart. He was very student-athlete oriented in his thinking about MHSAA policies and programs and was a dependable voice to bring up the student perspective,” MHSAA Executive Director John E. “Jack” Roberts said. “While he spent his career in the Upper Peninsula, he was capable of thinking about the good for the state as a whole. We’re proud to honor Dan Flynn with the Forsythe Award.”

Before beginning at Escanaba, Flynn taught and coached at Ishpeming High School, including leading the wrestling program from 1967-71. He coached Ishpeming to an MHSAA Upper Peninsula wrestling championship in 1971 and then Escanaba’s wrestling team to six MHSAA U.P. titles in nine seasons. As an assistant football coach for the Eskymos he helped lead the team to the MHSAA Class A title in 1981 and a runner-up finish in 1979.

He also served as a track and field official for 42 seasons, and this fall returned to coaching as a football assistant at Marquette High School.

“It was awfully important to me that the kids across the state had a voice in the Representative Council,” Flynn said. “I thought I had something to say. And I was taught by some really good people, Jack Roberts, (associate directors) Jerry Cvengros and Tom Rashid, that I needed to listen to take care of people.”

His contributions to his community reach outside athletics as well. Flynn has participated in the Youth Assistance Program and American Heart Association in Delta County and as a CPR instructor for the Superior Upper Peninsula chapter of the American Red Cross.

Flynn grew up in Chicago and received his bachelor’s degree in health and physical education from Northern Michigan University in 1969 and a master’s from NMU in 1993, and played football for the Wildcats as an undergrad. He also studied at Utah State University and the University of Oregon.

PHOTO: Dan Flynn coaches his football team at Escanaba before stepping down from that post after the 2011 season. (Photo courtesy of the Escanaba Daily Press.)