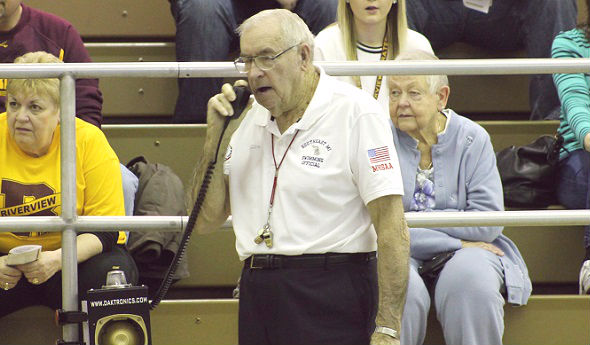 Brodie was the third winner of the MHSAA’s prestigious Vern Norris Award in 1994 for his service as an official.

So it should come as no surprise that Brodie, 87, is enjoying his retirement in Flat Rock with his wife of 62 years, Margo, their son and daughter and eight grandchildren.

There is, however, an impressive twist: Brodie still has an active connection with high school sports as he occasionally serves as a referee for swimming meets in the Downriver area. Forever humble, Brodie has a simple reply to the question, “Why are you still doing that?”

“I just want to give back,” he said. “Maybe it’s in my genes, I don’t know. Maybe it’s my heredity. I think it’s like playing cards; you have to go with the cards you’re dealt with. I still work out about three days a week.”

Greene built one of the greatest dynasties in the history of Michigan high school basketball. He coached 41 seasons and won 12 MHSAA Finals championships, including five in a row from 1961-65 and four in a row from 1969-72. Brodie, who also played football and ran track in high school, played on Greene’s third team in 1945-46.

Maybe sensing his calling as a coach, Brodie also helped the program by starting a summer league for younger players.

“There was a park that had an asphalt court, and when he won his first state championship team, those were kids I started in seventh grade dribbling around in circles,” Brodie said, “and the eighth-grader on that team was Blanche Martin, who played football at Michigan State. DeWayne Smith was on the team, too, and he ended up succeeding Greene as the coach.”

After graduating from River Rouge, Brodie went into the service and ended up in Japan. When he returned, Brodie enrolled at Michigan State Normal College (now Eastern Michigan University), where he played football for three years and basketball for two.

It was while at Michigan State Normal that Brodie became certified in Red Cross life-saving, and that not only led to a job at Torch Lake near Traverse City but paved the way for his involvement with swimming.

“I made $2,800 and taught seventh-grade geography and eighth-grade science, two ninth-grade biology classes, a study hall and a phys ed class,” he said. “I didn’t get anything extra for coaching, but I met my honey up there. I fell in love and married her and came back downstate. It was instant love.”

In 1953, Lincoln Park High School hired Brodie as a physical education teacher and assistant coach in football, basketball and baseball. Lincoln Park had no idea what it was getting. In 1955, the athletic director asked Brodie to coach the swimming team because of his background with life-saving.

After 13 years at Lincoln Park, Brodie accepted a job as athletic director at Southgate High School. Eventually, the position also included duties at Schafer High School, which is closed.

“It was strictly an administrative job, and that got me out of coaching,” Brodie said. “That’s when I had the time to do a little bit of officiating.”

Brodie, who had first registered as an MHSAA official for 1955-56, joined a football officiating crew that went on to work an MHSAA championship game, served on the MHSAA Representative Council from 1978-80 and 1981-83, and officiated swimming meets. And he was never afraid to let his voice be heard.

“Our crew was headed to Jackson to do a playoff game, and the athletic director there was my good friend Dennis Kiley,” Brodie said. “The guys on the crew were getting up there in age, and the game was getting tougher to do. They were going to pay four of us, but I wanted to have an extra official so we could cover the deep passes and said we would still take the pay for four and just split it among the five of us.

“They told us no, but we did it anyway. I was the umpire that night, and I was the deepest umpire you ever saw in high school football. Nobody said anything about it.”

Kiley chuckled at the mention of Brodie.

“Joe was one heck of an athlete; football, basketball, you name it,” Kiley said. “He is a heck of a good guy and was a very good official. He was excellent. I would have hired him anytime.”

Not one to take time off, Brodie found odd jobs in the summer to pick up a little extra cash.

“I’ve worked every summer doing all sorts of things,” he said. “I’ve jumped off milk trucks, things like that.”

No job was too big or too small for Brodie, whose next move was to Davison Middle School in Southgate, where he was principal when he retired in 1986 – 30 years ago.

He didn’t slow down much in retirement.

Every winter for 25 years, Brodie and his wife would go to Arizona, and he could not resist getting involved with athletics. He worked track meets, doing high school and AAU meets. He once was named the official of the year in Arizona and also had a chance to work the Pac-10 conference meet at Arizona State University.

“Here’s a little kid from River Rouge, and I’m lining up guys from Washington, Washington State, USC and Arizona. I felt so humbled being a starter. Where else other than this country can this happen?”

Brodie concedes he is slowing down at 87, but slowing down at 87 is a good thing. He and his wife no longer go to Arizona for the winter, so that has opened the door to do a few boys swimming meets in addition to girls meets he often works in the fall.

“I just fill in for people, that’s what I do. I’m not going out and hustling, but I think I’m still sharp enough to do the job.” 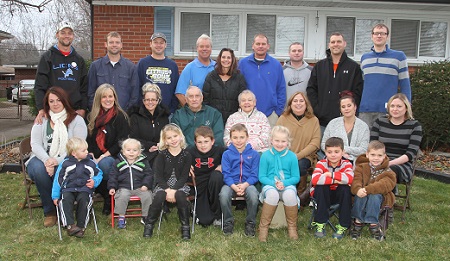 Brodie’s legacy lives on, not only in the continued work he is doing but in his son and daughter. Brodie’s son, Bob, has been the head basketball coach at Salem for 26 years and is in the Michigan High School Coaches Association Hall of Fame. He also has been an MHSAA registered official for 39 years in five sports.

Brodie’s daughter, Jann Stahr, is an MHSAA official in competitive cheer and swimming.

“They are why we don’t go to Arizona anymore,” Brodie said. “Both kids live in Flat Rock. My daughter is about seven houses away, and my son lives about three blocks away.”

The Brodie legacy has more meat to it. In addition to the Norris Award, Brodie is in the Michigan High School Coaches Association Hall of Fame, the Eastern Michigan University Hall of Fame and the Lincoln Park Hall of Fame, which has his bust on display at the Sportsmen’s Den in Riverview.

PHOTOS: (Top) Flat Rock's Joe Brodie officiates a swimming and diving meet Tuesday at Riverview. (Middle) Brodie, an official for 61 years, dresses for a football game during the 1970s. (Below) Brodie with the "Brodie Bunch," his family, which includes current officials, coaches, athletes and past coaches. (Photos courtesy of the Brodie/Stahr family.)