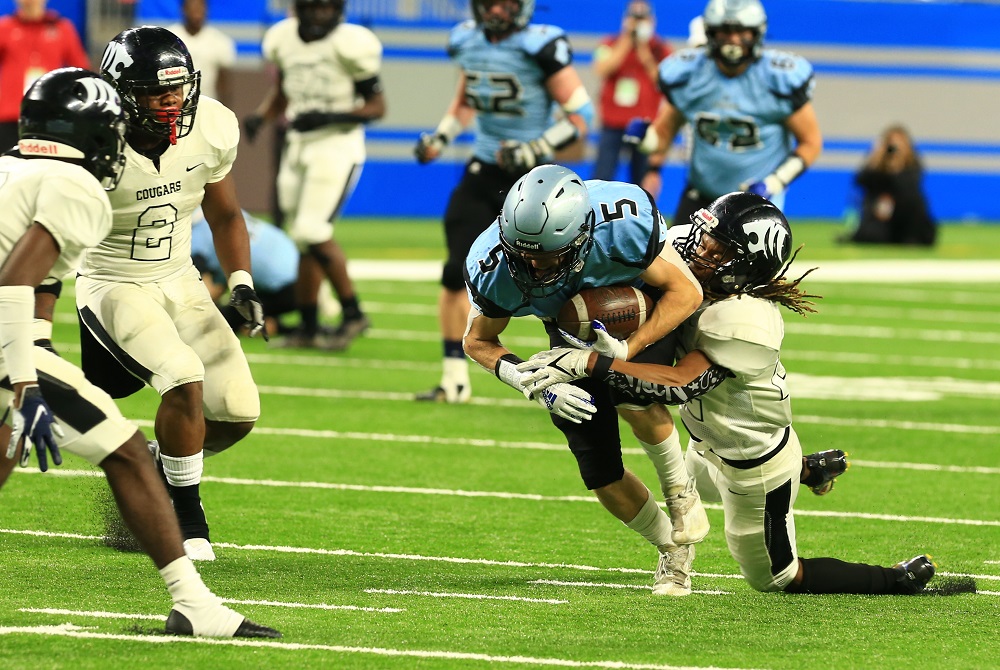 Lansing Catholic finished the 2021 football season as 11-player Division 6 champion at Ford Field, and the Cougars offense was paced the last two seasons by a standout quarterback and receiver who both made the MHSAA record book for single-season and career accomplishments.

Joey Baker was added for 2,536 yards passing this past season, with 162 completions on 294 attempts and 28 touchdowns through the air. He made the career passing lists with 4,153 yards over 13 games.

Senior receiver Alex Watters was added for 1,193 yards receiving on 77 catches; his 2,949 yards receiving over 40 games ranks sixth for a career, his 161 catches are ninth on that stat list and his 38 TD receptions rank ninth as well.

Senior kicker Jonah Richards was added for making 49 extra points and he finished his career with 156 (in 167 tries), good for 12th on that list. Additionally, junior Brandon Lewis was added for his 262 receiving yards in a Sept. 2 game against Williamston.

Baker will continue at Hope College and Watters will be a preferred walk-on at Michigan State.

See below for more recent additions to the 11-player football record book.

DeWitt’s run to the Division 3 championship game for the second-straight season this past fall came again with big numbers from senior quarterback Tyler Holtz, senior receiver Tommy McIntosh and senior kicker Brandon Soltis. Holtz threw for 2,885 yards to finish his two-season varsity career with 5,311, and he tossed 41 touchdown passes to finish with 76 over 25 varsity games. The 41 TD passes tied for eighth-most in one season. McIntosh had 1,328 yards and 22 TDs receiving and finished his three-season varsity career with 140 catches, 2,696 yards and 44 receiving touchdowns. His career yardage is 11th on that list, his 22 touchdowns last fall tied for fourth-most for a single season and his career receiving scores rank second. Soltis connected on 74 more extra points to finish with 152 in 163 attempts over three seasons; both totals rank among the top 15 on their respective lists. As a team, DeWitt was added for scoring 635 points and piling up 6,055 total yards and 89 total touchdowns over 14 games. Holtz will continue at Brown, and McIntosh will play next at Wisconsin.

A pair of Bloomfield Hills Brother Rice athletes have been added for tying the records for longest kick and interception returns. Rocco Milia brought back an interception from deep in the end zone – officially 100 yards – against Detroit Country Day on Oct. 23, 2020. Cole Lacanaria returned a kickoff 99 yards for a touchdown last Oct. 15 against Traverse City Central. Milia was a senior in 2020-21 and now plays at Columbia in New York, and Lacanaria has signed with Lawrence Tech.

Gladwin’s perfect regular season in the fall included three performances that made the records. Junior Anna Seebeck made the single-season extra points list, connecting on 60 of 69 tries over 10 games. The Flying Gs also twice made the total offense list as a team, with 611 yards against Clare and 603 against Shepherd, both in victories.

On Sept. 10, Belding’s Owen Meinke pulled in a deflected Wyoming Kelloggsville pass deep into his team’s end zone and ran down the right sideline the length of the field for a 100-yard interception return touchdown to also tie the MHSAA record. Meinke is a junior.

Ethan Schumaker got all of a punt during a Nov. 7, 2020, playoff game against Traverse City St. Francis. The Harbor Springs then-senior sent it 71 yards, including nearly 60 in the air, as the Gladiators took over possession from their 6-yard-line. Schumaker is punting at Michigan Tech.

Senior Bryce Stanley got off to a fast start last fall, catching 11 passes for 239 yards and four touchdowns in Carson City-Crystal’s win over Fowler. The yardage and TDs made single-game lists.

Clinton Township Chippewa Valley’s Cephus Harris and Grosse Pointe South’s Will Johnson both put up record book performances in Chippewa Valley’s 49-37 win Oct. 8. Harris made the record book scoring seven touchdowns – four rushing, two receiving and one on a kickoff return. Johnson made the receiving yardage list with 238. Harris ended up putting together one of the highest-scoring seasons in 11-player history, scoring 36 touchdowns with one two-point conversion for 218 points – making the lists for both single-season points and TDs. A senior, he’s signed with Youngstown State and Johnson signed with Michigan. Additionally for Clinton Township Chippewa Valley, it has submitted the game with the fewest first downs given up in 2021, allowing only two to Troy on Oct. 29.

Charlotte’s Braden Hill scored the first points of his team’s 60-21 win over Lake Odessa Lakewood on a 77-yard kickoff return Oct. 15, and he was just getting started. Hill also returned two more kickoffs for touchdowns, both 80 yards, to tie the record for kickoff return touchdowns in one game. Hill is a junior.