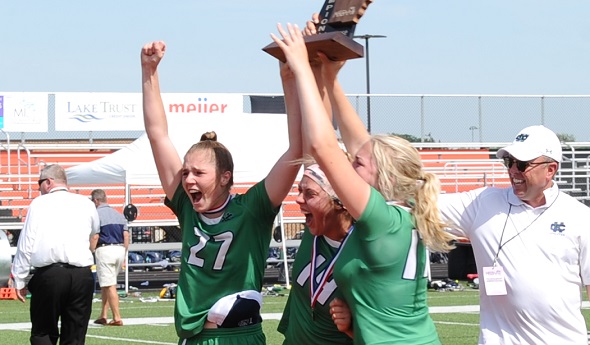 Isabelle Scane has accomplished a career’s worth of lacrosse stardom at Bloomfield Hills Cranbrook Kingswood the last three years – and she still has a season to play.

The Cranes’ senior-to-be has been entered into the MHSAA record book with 360 career goals – nearly 100 more than anyone else – after scoring the second-most for one season (146) this spring in leading her team to its first Division 2 championship.

In addition, Scane’s 183 points total this spring rank third on that single-season list, and her 453 career points are also third and only eight off setting a record.

Teammate Sophia Milia was added to the records as well for her 87 goals this season, 60 assists and 147 points (seventh most all-time). Former teammates Grace Giampetroni has six record listings for her final two seasons, 2015 and 2016, and Ari Vespa was added for a pair of accomplishments in 2015.

Scane has committed to sign with Northwestern University, while Giampetroni played last season at High Point University in North Carolina and Vespa plays at University of Michigan. Milia also has another high school season to play.

Click the girls lacrosse heading below to see that record book in full, and check out more recent record additions in that sport plus boys basketball, boys and girls soccer and softball.

Corey Redman just missed making the single-season free throws list twice during his four-season Boyne City career from 2012-15. But he ended his run 14th on the career free throws list with 431 in 565 attempts (76 percent) over 90 games. Redman plays at Central Michigan University.

Former Grand Rapids Forest Hills Central standout Derek Dennis was added for making 224 3-pointers over his four-year career from 2006-09. Dennis went on to play baseball at University of Michigan and Davenport University.

Hartland finished 18-4 this spring in part on the scoring of junior Emily Beazley, who was added to the records for games of eight and seven goals, 83 overall and 112 points. Senior teammate Teagan Laier was added for seven goals in a game as well, and senior Meghan Economou made the single-season goalie saves list with 151. Economou has committed to continue playing at Calvin College, and Laier has signed with Northern Michigan University.

DeWitt continued its surge this spring, finishing 17-5 while adding a number of record book entries including 308 goals scored as a team and the first entry for most goals in a game – 26 in a win over Lansing Waverly. Jordan Markowski was added five times for eight assists and 12 points in that big win, plus 80 points this season, 257 for her career and 170 career goals from 2014-17. Rachel Madar was added for seven goals in a game, 78 this season and 215 for her career, plus 95 points this season and 260 over the last four. Sierra Dietz was added for 53 goals this season and 164 career goals and 204 career points over her four varsity seasons, and Julianna Harrison was added for 150 saves in goal this spring. Madar will continue her career at Kalamazoo College.

Comstock’s record goal-scoring season with 111 over 22 games last fall was led by senior Mubark Hasan, who in addition to contributing to the team’s single-season record book listing for goals also is listed for six goals in a game twice and for 59 goals by himself in 2016. Hasan also made the single-season points list with 73 total. Comstock finished 20-4 and won its Division 3 District.

A pair of standouts made the record book after helping Marshall to an 18-5-2 finish. Sophomore Kate Face was added for 32 goals over 25 games, while senior Lauren Day was added for 16 shutouts in goal. The team was added for 11 straight shutouts from May 3-June 3. Day will continue her career at Jackson College.

Livonia Franklin’s Brooke Garbarino has earned entries all over her school’s record book, and a few statewide as well. She made the single-season average list this spring hitting .646, and her 23 doubles tied for 10th most in one season. She also made the career doubles list with 58 over four seasons. She’ll continue her career at Jackson College.

Zeeland East also graduated a pair of record book-making standouts this spring. Audrey Kazda made the single-season doubles list with 23 in 2017, while teammate Sara Medendorp finished her four-year career with 20 home runs. Brooke Leonard also was added for 956 strikeouts from 2011-14.

Blissfield seniors Kelsey Wyman and Brooke Henning provided one of the state’s top one-two punches over the last four seasons. Wyman has four record book entries including for 212 career runs (ranking 16th) and 242 career hits (ranking 15th). Henning leaves 11 record book entries; she tied for second with three home runs in one game against Brooklyn Columbia Central on May 2, tied for fourth with 18 home runs this season, ranks tied for fifth with 47 career home runs and comes in 10th with 197 career RBI. Teammate Jade Casanova also was added for six RBI in a game this spring, and past teammates LeeAnn Seidl (27 homers from 2013-16) and Kelsie Abbott (22 doubles in 2014, 53 over her four-year career) also were added. Henning will continue to play at Grand Valley State, while Wyman will play basketball at Ferris State. Seidl plays at University of Michigan-Dearborn, and Abbott played at Siena Heights. Additionally, Blissfield as a team earned three entries for home runs in a season, the highest being 40 this spring – which is tied for sixth most.