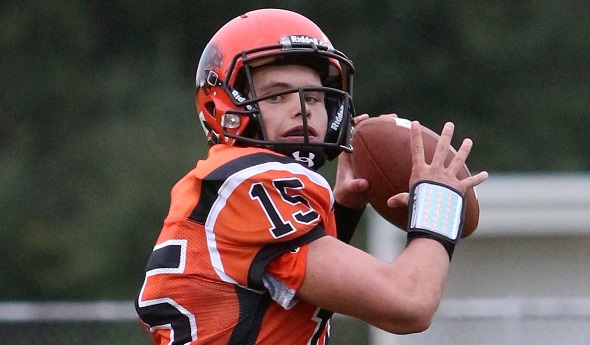 Stockbridge’s Mason Gee-Montgomery graduated this spring with 37 entries in the MHSAA football record book, while teammate and top receiver Kolby Canfield finished his high school career appearing 16 times for accomplishments they frequently collaborated on over the 2014, 2015 and 2016 seasons.

Gee-Montgomery was recently added in part for his 303 passing attempts, 211 completions, 2,609 yards and 40 touchdown tosses as a senior. His career totals also were updated to reflect 866 attempts, 601 completions, 8,269 yards and 124 touchdown passes over three seasons and 30 games – with his seven touchdowns passes in a 2016 game against Leslie tying his MHSAA record and his career touchdown passes setting a new standard.

Canfield, meanwhile, had 93 receptions for 1,190 yards and 20 touchdowns as a senior in 2016, and 201 receptions for 2,773 yards and 40 scores over his 23-game career. His 19 catches in a 2016 game against Parchment are an MHSAA record, and his 201 career catches rank second while his 40 career touchdown grabs are tied for fifth most. He and Gee-Montgomery also together helped tie an MHSAA team record with 23 straight pass completions in a 2015 game against Vermontville Maple Valley – Gee-Montgomery completed 22 passes during the string, with Canfield adding one more.

Gee-Montgomery recently completed his first season as a quarterback at Case Western Reserve in Ohio, while Canfield played this fall at Albion College.

Read on for more recent record book additions for football, boys basketball, boys soccer, volleyball and wrestling, and click on the sport headings to see those record books in full.

Hudsonville Unity Christian coach Scott Soodsma was added to the career wins list with a 527-251 boys record entering this season. Soodsma has coached Unity’s boys since 1992-93 and previously coached at McBain Northern Michigan Christian and in South Dakota. He also has a 105-36 girls basketball coaching record.

Clinton Township Chippewa Valley shut down and shut out Utica 44-0 on Sept. 29, and in the process made the records by allowing only five first downs. The Big Reds finished 10-2 this fall.

A senior during the 1989 season, Grosse Pointe Woods University Liggett’s John Dodds had five sacks in a 55-0 win over Hamtramck on Oct. 27 of that fall. His sacks led to Hamtramck losing a combined 57 yards, and he also ran for a touchdown in that game.

Spencer Peterson tied the record for most touchdowns in a quarter with five in Grand Rapids NorthPointe Christian’s 55-20 win over Hamtramck on Aug. 29, 2015. He also made the record book list with six rushing touchdowns total. Peterson is playing at Wheaton College.

Zack Shane capped his four-year varsity career at Fruitport with a number of accomplishments this fall, including a high of 43 goals that made the MHSAA record book. He’s also listed for 102 career goals, 139 career points, six goals in a game Sept. 5 against Grand Rapids Kenowa Hills and a goal seven seconds into a game against Greenville his junior season.

Saranac was among the top teams in a strong Central Michigan Athletic Conference that had two MHSAA Finals runners-up this fall, and senior Ally Couturier earned a pair of record entries as a top setter. She had 46 assists in a five-set loss to eventual Class D runner-up Fowler on Sept. 13, and then 45 assists in a four-set win over Pewamo-Westphalia.