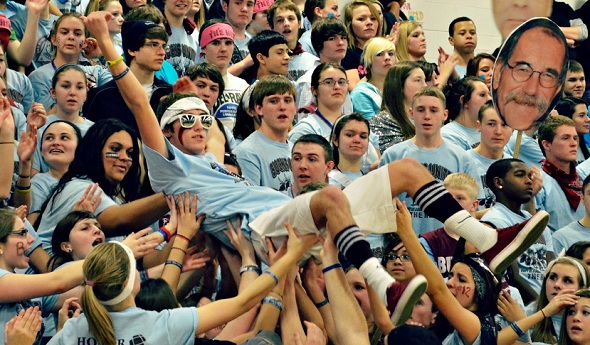 Josh Money had gone to just about every Buchanan boys basketball game during his first three years of high school, usually one in a semi-full section of stands.

But as the senior “Trophy Buck” stood in front of his school’s newly-created “Herd” for its first theme night on Dec. 7, he hardly could believe his eyes.

He, his classmates and athletic director Fred Smith had hatched the idea of creating the section only a few months before. But as Money looked up to see – and hear – dozens of students dressed up for “Christmas on the Court” and waving “Buck Power” spirit towels, he began to believe winning this year’s MHSAA Battle of the Fans II was possible.

Late next month, they'll hang an MHSAA championship banner announcing the Herd as this year's BOTF champion and the best student cheering section in Michigan.

“Words can’t really explain it. It just feels good that we are the best. There’s no guessing. We are the best," Money said. "I’m proud of our school, proud of our community. How much support we had throughout has just been amazing. I never knew it was going to come out to be this big.”

The most wide-spread slogan of many put out by this year’s MHSAA Battle of the Fans II champion starts with the friendliest of greetings – “Welcome.”

But to see the entire Buchanan community – from elementary schools students to high school leaders to grandmas and grandpas locking arms and standing together – in our eyes, there was no more meaningful sign of the community-building power of the Herd.

Buchanan was chosen based on a vote by the MHSAA’s 16-member Student Advisory Council influenced by public vote on the MHSAA’s Facebook page. A total of 8,024 fans voted in the MHSAA Facebook poll, with those results then equated against a school’s enrollment.

Buchanan far and away received the most Facebook votes – 4,522, or 63 more than the size of the town’s population. Zeeland East received 2,056 votes. The Student Advisory Council based its vote on the following criteria: positive sportsmanship, student body participation, school spirit, originality of cheers, organization of the group, section leadership and overall fun.

Other numbers to consider from this season's contest: The 26 application videos have been watched more than 24,000 times, and the MHSAA-produced videos from our tour stops have 10,033 views. The stories on the five finalists plus Tuesday’s explanation of how to vote had been viewed 17,206 times as of 8:30 this morning.

As this contest comes to a close, we remember fondly each of our Battle of the Fans visits this winter. Any of the five schools would've been a worthy champion.

Here’s some of what we enjoyed most about each finalist:

What we saw: More of what made Frankenmuth our inaugural BOTF champion in 2012. A large crowd reaching to the top of the bleachers, completely engaged in the game throughout, and having a blast from opening tip to final buzzer. And when it comes to halftime, no one is more creative – the “Silent Night” sing-along at center court was a solid follow-up to the 2012 halftime chicken dance.

Why we’re fans: Watching Frankenmuth from the outside makes the casual observer want to jump in and take part. The Eagles simply have a blast, regardless of who is standing at the front directing traffic. Nearly all of the section’s leaders graduated last spring, but roles (and in a few cases, costumes) were handed down, and a few key juniors already are involved – meaning we could see Frankenmuth among the finalists again in 2014.

All in the Family Award: Ann Arbor Gabriel Richard

What we saw: A true community where one might not expect to see it – a school which draws students from not just Ann Arbor but a handful of neighboring towns as well, yet gets constant support for multiple sports no matter what day of the week. This section has plenty of history, and some recent tragedies sadly showed again the strength of Gabriel Richard’s bonds.

Why we’re fans: A fun clip we didn't use in the video showed piles of props scattered next to the stands – the necessities of putting on an ultra-creative “Beach Night.” Our favorite was the human wave, which was then surfed by one of the section leaders. We were impressed by the big plans being made for the “Masquerade for Mott” fundraiser for the C.S. Mott Children’s Hospital, and just the overall connection throughout the section and with its basketball team on the floor, and cheerleaders and dance team on the sidelines.

What we saw: Members of “The Coop” don’t leave their responsibilities as student section members at the door. Living their brand of “rowdy” is a fulltime deal. Zeeland East was our largest school among this year’s finalists, but also has the most developed Facebook presence and a strong Twitter following to spread the word and keep the ideas flowing 24/7. And “High 5 Hallway” – a game day occurrence during which hundreds of Zeeland East students meet in one hallway during a break, form lines and high five each other – was our favorite new idea of this year’s tour.

Why we’re fans: From “High 5 Hallway” to the way senior leaders plant themselves with the underclassmen at the top of the section, the sense of unity was unmistakable despite the large size of the school and its section. Leaders have a constant dialogue with their athletic director – something we've found is a must for top sections – and it’s easy to get worn out just watching this non-stop Coop party.

What we saw: The lessons taught by Vandercook Lake’s group of 13 senior leaders are twofold: Make the most of your four years cheering on your classmates, and it’s possible to accomplish any number of goals by being driven and organized. The Jayhawks got this section going this fall in part to acquire a new mascot costume; they ended up with that costume, school flags, spirit towels and a legacy ready-made for the next group to pick up and continue building.

Why we’re fans: We have a lot of respect for a large group of students pulling together with so many possible viewpoints and abilities and turning out something this positive. Vandercook Lake also was our smallest finalist this year – but showed us a section much larger than its relative size and comparable in creativity and spirit with schools much larger. These students had an idea and made it happen.

What we saw: All five of our finalists have created something of value in their respective schools and their communities as a whole. But nowhere is that presence felt quite like in Buchanan.

“The Herd” was little more than a group of milling “deer” a few months ago. Today, it’s a community staple, a point of camaraderie welcoming to all students not only at the high school but all the way down to the kindergarten classes. The section is invited weekly to community events, and the comments posted on our Facebook page and Second Half stories came from parents and grandparents, recent alums and those who graduated and left town long ago.

There’s a lot of pride in Buchanan, and Buchanan takes pride in the Herd.

Why we’re fans: Buchanan does this the right way. The “Woods” are lively, but positive. The Herd is creative and a little silly, but connected to the game and supportive of the team.

And someone give these students their honorary marketing degrees right now; by branding phrases like “Herd Dat!” with younger students, they've ensured this section will live on for years to come.

“Walking through the school, or in front of the stands, all the little kids are all about it,” Money said. “(They’ll say,) ‘Josh Money, you should do this. You should do that.’ I’m getting messages all day, every day from little kids telling me what we should do.

“To have something that great keep going for years, it’s going to be pretty cool to see.”

Now our finalists will take their acts to a bigger stage – clips from all five MHSAA tour stops will be shown on the main scoreboard during the Girls and Boys Basketball Finals in March at the Breslin Center.

All five sections are ambassadors of the best of student cheering sections in our state. We’re glad to congratulate them for setting awesome examples of the fun that can be had while keeping to good sportsmanship and a positive vibe.

And we’ll be proud to award Buchanan its championship banner – Herd Dat, loud and clear.

Click to check out our the stories and videos behind the finalists. Also, click to see student-produced videos from 26 sections who entered the contest. (Photo courtesy of Caryn DeFreez, DeFreez Photography.)