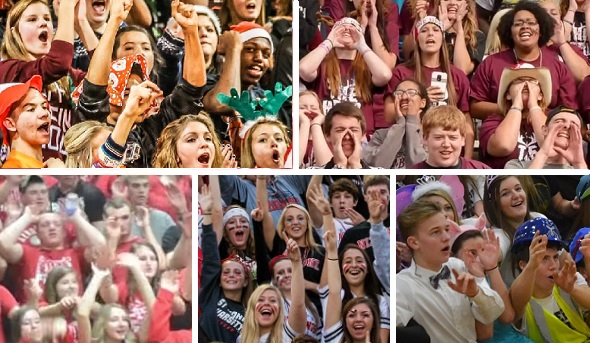 Perennial powers are beginning to emerge as the MHSAA Student Advisory Council embarks again on its quest to reward Michigan's top high school student cheering section. Reigning champion Beaverton is back for Battle of the Fans IV, while 2013 champion Buchanan is a finalist for the third straight year.

But more than half of this season's hopefuls applied to the contest for the first time – and Dowagiac, St. Johns and Yale impressed enough to earn their shots at joining the elite by claiming the 2015 championship banner.

Those five finalists have been selected for this year's BOTF contest, which will again recognize the top student cheering section from among member schools with the winner crowned in February and then recognized in March during Boys Basketball Finals weekend at Michigan State University's Breslin Center.

Battle of the Fans IV, organized by MHSAA staff and its 16-member Student Advisory Council, will reward the cheering section that best creates the positive and festive atmosphere made possible when students show enthusiasm, togetherness and sportsmanship while rooting for their team. MHSAA staff and Student Advisory Council members will visit all five finalists for home boys basketball games during the second half of this regular season, with coverage and video from those visits and the announcement of the winner all to be published on MHSAA Second Half.

Schools were invited in December to submit short videos, via YouTube, of their cheering sections in action. The winner will be announced Feb. 20, and video of all five sections will be played on the Breslin Center HD scoreboard during the Finals in March. The champion also will be recognized during the Boys Semifinals on March 27.

The 21 applicants for BOTF IV were the second most in the four-year history of the event.

“We are thrilled to see the excitement students have generated at each and every one of the schools that chose to participate in Battle of the Fans IV,” said Andy Frushour, MHSAA director of brand management and advisor to the Student Advisory Council.  “All should be proud of their entries, and more importantly, proud of the positive impact they’re having on their schools and communities.”

The finalists were chosen by the Student Advisory Council, and the winner will be selected by another Advisory Council vote based in part on activity on the MHSAA’s social media sites. All social media postings regarding Battle of the Fans IV should include the hashtag #BOTF. The MHSAA will post throughout the finalists tour on its Facebook, Twitter and Instagram sites and Snapchat feed.

The Student Advisory Council is made up of eight seniors and eight juniors who each serve two-year terms. The Council acts as the voice of Michigan's student-athletes; it serves as a student sounding board for the MHSAA's Representative Council, assists in planning Sportsmanship Summits, Captains Clinics and other student leadership events; participates in a yearly focus group about the state of high schools sports for Michigan State University's Institute for the Study of Youth Sports and assists with medal ceremonies at MHSAA championship events.