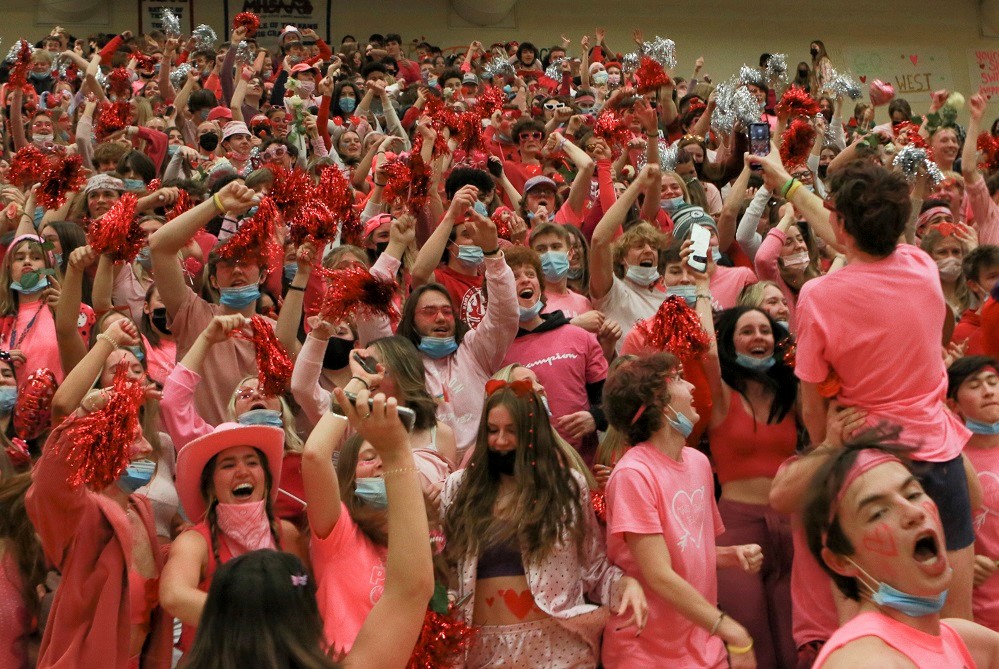 TRAVERSE CITY – The Bleacher Creatures have been waiting for this.

Of course, students everywhere were aching for some signs of normalcy over the last many months. But what’s that looked like at Traverse City West this school year?

Something like 400 students showing up to a Tuesday night nonleague basketball game/dance show/drumline concert/Valentine’s Day extravaganza reminiscent of gameday experiences Bleacher Creatures have enjoyed during decade-plus run as one of the state’s top student cheering sections.

“I think we’re all just so eager to get back at it after a year of pretty much constant disappointment because we just constantly want to be at games, and pick the themes and just be in that community and we couldn’t,” West junior Ella Boivin said. “Now that we’re back, we have such a good group of people. We just have so much energy. We just want to put it out there and have great school spirit.”

That’s turned into the biggest student sections anyone remembers at volleyball matches, a crew for home and road soccer games, a major turnout for wrestling and even some support at the ski hill – on top of the usual football and basketball gatherings. “It’s not just a thing where our school is having a game, we should just go,” senior Hattie Holmes said. “Everyone wants to be here.”

The MHSAA visited West and its Bleacher Creatures as the final stop on this year’s Battle of the Fans X finalists tour, taking in the Titans’ Feb. 8 boys basketball game against Ludington. This was our fourth visit to West, which won BOTF V in 2016. Midland Dow hosted the first of this year’s visits Jan. 28, and Buchanan was the second stop Feb. 4. Public voting begins on the MHSAA's social media channels Monday, with the BOTF X winner announced Feb. 18 on Second Half.

Below is our highlight reel and 10 “X Factors” from our trip to Traverse City West.

As noted, Tuesday’s theme added some serious pink and red to West’s usual green and gold home court. Red and silver pompoms were another festive touch, as was the red flowery loveseat hauled in to become part of the first row. The Boys Dance Team – a collection of 20 “protégés” under the tutelage of trained dancer Boivin – performed at halftime, and the drumline provided a hard-hitting soundtrack including coordination with one of the section’s traditional cheers.

2. Jammin' in the Stands

An estimate of 400 students at Tuesday’s game is not an exaggeration. In fact, it might be light. We’ve been to West a number of times, as noted above, and this easily was the largest section we’ve seen – and perhaps can only be rivaled by Rockford’s showing during the first BOTF in 2012.

Student life at West is driven in part by its Student Senate, made up of seven representatives from each of grades 9-12 who meet for a class daily. The Senate is charged with usual student government duties – mostly planning social and community service events – but also directs the student section. Input from all four classes is anticipated and appreciated – the most popular theme night of the year was thought up by a sophomore – and senators from every class give the group the ability to have leaders comfortably reach out to peers their own age. The leaders we met with Tuesday also represented seven sports, including senior Will Gaston taking the court with the boys basketball team that night and his football teammate Kale Cerny who helped organize those sections before playing in front of them in the fall. 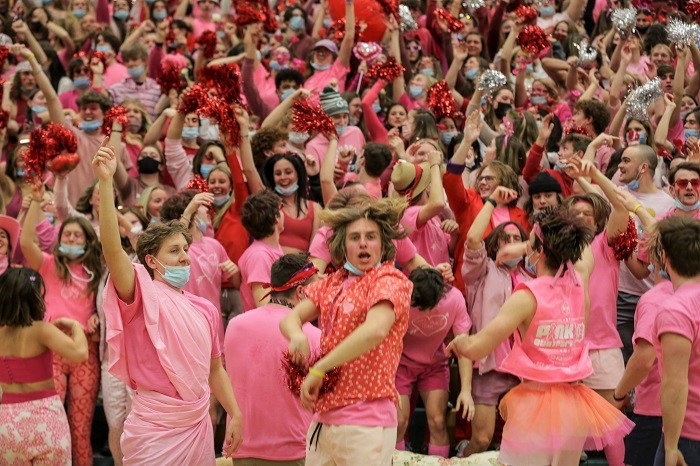 Senior Henry Melcher was stunned earlier this year when, while asking a group of students if they were coming to an upcoming game, they replied that they thought they needed to be officially invited to be part of the Creatures. In the past, it was thought the section was made up of students from just certain social circles, but “I think this year that idea has been thrown away,” senior Patrick Guiney said. “We talk to every single person about games, and no matter what we encourage them to go – ‘If you’ve never been to a game before, try it out.’” Newbies figure things out quickly. “Most of our chants are pretty simple,” he added, “but they’re also really energetic.”

The Creatures date the start of their section to 2007-08 and the student governor that school year. When West won BOTF V, the governor (who leads the Senate) was senior Cooper Kirby – who last school year was a teaching and coaching assistant at West, and he connected with Guiney and others as they sought to restoke the section after the COVID-induced break. Mission accomplished. Among highlights we've enjoyed every time we've visited: The drumline chant with “We Are The Creatures” – especially toward the end of games when it’s either crunch time or time to celebrate – is one of the most memorable we’ve encountered over our decade of BOTF travels.

6. Make the Most of Media

The Creatures utilize the normal social media channels, like many successful sections. But senators also do a ton of random, go-up-to-people public relations and promotions – “PR’ing” was one of the buzzwords of our visit. Guiney takes it up a notch by giving the section its own in-house media. A soccer player during the fall, he began interviewing teammates and posting those segments, and has branched out into interviewing members of the student section and even non-sports groups like the theater cast. Those kinds of connections – especially giving a voice to the variety of teams/groups and students from all four grades -– help make a school of 1,600 students feel more close-knit.

7. Down to a Science

Setting this all up takes about 10 minutes of class time each day – senators pick a theme, plan to “PR” it, talk about additional details, and then everyone jumps into their roles (decorators, promoters, etc.). The system is set up well to connect with constituents – again, with leaders from every grade, students know which senators to go to with questions. And they also know to get there early – Holmes said friends show up at 5 p.m. for 7 p.m. games to make sure they get close to the front.

No, not the Netflix drama. This House of Cards describes the Creatures’ favorite theme of 2021-22 so far, a first-time “Vegas” night for football Homecoming that saw a massive and fashionable turnout as students rolled in "dripped out" elegantly in gowns, suits and other formal wear. As referred to above, that theme was thought up by a sophomore – and providing ideas is an open-ended process. A list hangs in the Senate classroom that’s open for anyone’s contributions – and as of the weekend stretched about 50 ideas long.

Senior Zack Featherstone is the governor, and he’s been asked by multiple other schools’ student leaders how West gets such a turnout. “The first time I got asked that question, I had no idea how to answer,” Featherstone said. “But I think it evolved into when we (as leaders) emit the energy of going to these games, having fun and just being very crazy and having a good time, it spreads to other people and they eventually want to go.”

As inviting as the Creatures are, they aren’t tolerant of fans who don’t want to follow decorum. Again, the large number of leaders spread among all four grades is key when it comes to keeping everyone on the right page. “We do not let anything disrespectful happen in our section because it completely ruins everyone’s fun,” Boivin said. “It doesn’t matter what team you’re on.”

The Battle of the Fans X finalists tour is complete. Public voting on the MHSAA’s social media channels starts Tuesday – come back to Second Half for details – and the champion will be announced Feb. 18.

PHOTOS (Top) Traverse City West's "Bleacher Creatures" enjoy one of many rowdy moments during Tuesday's boys basketball game against Ludington. (Middle) The Creatures provided a blast of pink and red for their Valentine's Day theme night. (Photos by Alan Newton/Newton Photography; click for more from this BOTF visit.)

On Aug. 9, three members of the MHSAA Student Advisory Council participated in the filming of a video for Bally Sports Detroit that celebrates the 50th anniversary of Title IX and the opportunities it created for high school student-athletes.

Tolmie also documented the day of filming in the following Tik Tok video.