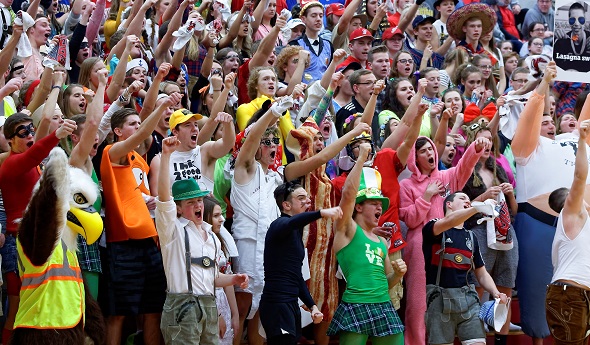 FRANKENMUTH – In a section of stands nearest the door to welcome all who enter Frankenmuth’s gym, the first Battle of the Fans champion was born five years ago.

The seventh graders that winter of 2012 are seniors now. And the Eagles on Friday were seeking to add the title of first two-time champion to that original BOTF banner as we finished up this year’s finalists tour with our fifth and last stop.

The breakdown: This was our third visit to Frankenmuth in six years of Battle of the Fans. The student section hasn’t come up with a catchy name for itself, but it certainly has a reputation across the Saginaw and Thumb areas for the raucous atmosphere it creates during games, along with plenty of singing, dancing and general silliness. The Eagles always had decent student support for their successful football and girls and boys basketball teams, but amped up the organization, excitement and following five years ago – just in time to win that first BOTF title.

This trip, we met with seniors Megan Watkins, Shafer Webb, Kris Roche, Dalton Enequist and Jackie Weess, and juniors Kyle Robinson and Sam Tagget for the Eagles’ boys basketball game against Millington. Below is our video and takeaways after another visit with our first BOTF champion.

1. They’re carrying on a legacy.

That 2012 championship is a point of pride, at least for this year’s leaders, and perhaps especially to Webb and Robinson – their older brothers led Frankenmuth's section when it won the inaugural contest. The Eagles were a BOTF finalist in 2013 as well, but not again until this season. Students still turned out to support their classmates at games, but it took a driven leadership group to help the section step back into contention. Roche said the effort was kicked off with a hype video played during the “Friday Feed,” a weekly video show played school-wide. Leaders have worked closely clearing everything – themes, cheers, wild halftime shows (see below) – with athletic director Kevin Schwedler. Excitement started building during football season, and the turning point was the team’s trip and caravan that followed to Marquette for a Division 5 Semifinal at the Superior Dome. “Being on the sideline looking up at that crowd, it was easy to realize that we had a student body that was excited about being in the student section,” said Roche, a standout fullback and linebacker. “You don’t travel six and a half hours for a high school game if you don’t have pride in your school and want to be a part of it.”

2. They don’t care about being cool.

If you show up in normal clothes, you’re going to be the one looking ridiculous. That’s a direct quote from one of the leaders, and it remains true as much as it was evident during our first visit five years ago. The Eagles take their themes seriously, and the weirder the better. “That’s the biggest thing, trying to get the underclassmen out of their shells, realizing you don’t have to be all self-conscious and what not coming into high school,” Tagget said. “The whole point of the student section is to look as ridiculous as possible when you walk out into that set of bleachers.”

-Costume Party
*Look ridiculous
*No rules (other than keep it appropriate)
-Show MHSAA what the hype is about#GoEagles ??????????

Frankenmuth has 530 students, and at least half of them loaded the stands for Friday’s game. Granted, it was against rival Millington, but leaders boast that they bring a higher percentage of the student body to most games than other schools and rally as well to support a girls basketball team that has won 105 straight league games although often those contests are played midweek instead of Fridays. Even some of the parents got in the game for “costume night” with jerseys on top and lederhosen below. Coaches for both basketball teams have thanked the section for its support this season, and the solidarity with those teams is obvious from section leaders’ involvement in pregame introductions to their near-constant support throughout the game. It's common for student sections to have dances/stunts/skits planned for breaks. But what sets the elite sections apart is how they engage in cheering for their teams during play. Frankenmuth was all in on every possession from start to finish, chanting names of their classmates after they scored, celebrating baskets even when the final result had long been decided, and mixing in a little German chant for made free throws.

All seven leaders who met with us play at least one sport. They see the student section as another, which explains their competitive pursuit of the BOTF title. Watkins has spent more time editing videos over the last month than working on her golf game – although she’s playing that sport next year when she moves on to Western Michigan University. And like with our other finalists this year, getting the section ready from week to week and especially for the BOTF visit was a group effort fueled by high expectations. “We hold ourselves to a standard of excellence, and for every sport the goal is a championship,” Roche said. “This is our Super Bowl. We’re here to win.” 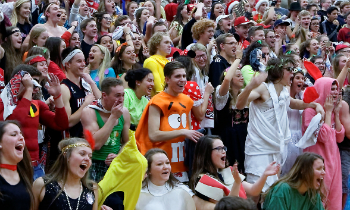 5. They’re always on their game.

In this case, that means a couple of things. Frankenmuth brings plenty of originality to the table, with theme nights like “Lit-mas” (think Lit + Christmas) and Friday's  “Costume Night,” which saw a mix of German garb highlighting the town’s heritage but also a variety of costumes and signs that defined random. What they did do together was cheer from before tipoff through the end of a 36-point win – and as was the case during our visits in 2012 and 2013, every break in the action at a Frankenmuth game is an opportunity to sing and dance, this time featuring everything from Miley Cyrus to “Santa Claus is Coming to Town.” We’re hesitant to explain halftime, even if leaders assured us they were “professionals” before rolling out mats and taking part in a WWE-style wrestling match complete with body slams and metal chairs. Kids, don’t try this at home – or at your schools without prior administrative approval.

Teachable moments: “I think with high school and everything in general nowadays, there’s a stereotype of how you should act, how you should dress,” Watkins said. “The freshman girls look at the senior girls, and I remember when I was a freshman and I saw the seniors, and they didn’t care – they wanted to express themselves and be who they are. And I think that’s why with our themes we dress crazy and we’re all different. … You grow into yourself and you have that confidence about you. We’re all athletes and we all understand that you have to live life with a little bit of confidence with our sports, with our grades, everything. (The section) kinda taught us that over the years; it’s just a student section, but it means a lot more than what people think it would.”

This was the goal: “Growing up, I always had my eyes on the student section,” Tagget said. “To be honest I never had any idea what it was. I just thought it was people going crazy in the stands. But I grew up with Kyle (Robinson), and being around his brother, he was the laughing-stock. And watching him lead the student section, I said that’s what I want to do when I get to high school.”

Tradition will live on: “We’ve got these (juniors), and they know the standard they have to hold, not only for themselves and the other leaders, but every student,” Roche said. “My little brother is going to be a freshman next year, and all his friends are beyond excited about their opportunity. And I think the excitement around here in the community, it’s real again. I don’t think we’re going be going away for a long time.”

Next up on BOTF: With all five visits complete, public voting for this year’s champion will begin Feb. 13 on the MHSAA’s Facebook, Twitter and Instagram feeds and continue through Feb. 16. To vote, like, retweet and/or share the photo of your favorite student section. The winner will be announced Feb. 17 on Second Half, and representatives from all five finalists will be invited March 24 to the Class B Boys Basketball Semifinals at the Breslin Center, where the winner will receive this year’s championship banner.  Click for coverage of our visits to Boyne City on Jan. 13, Traverse City West on Jan. 20, Charlotte on Jan. 28 and Petoskey on Feb. 1.

PHOTOS: (Top) Frankenmuth students fill their section of bleachers for Friday's Battle of the Fans visit. (Middle) Students decked out for "Costume Night" cheer on the Eagles to a win over Millington. (Photos by Chip DeGrace.)