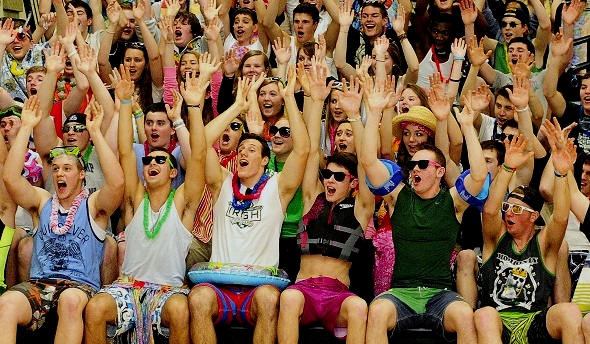 ANN ARBOR – The day Bridget was taken off her ventilator, all of Ann Arbor Gabriel Richard gathered in the school’s chapel to pray for the 12-year-old member of their family who soon would finish her fight against a rare form of brain cancer.

Senior Adam Olszewski had never seen anything like it. He’s been around the school through the careers of multiple siblings and understands what makes his school a special place. But “her story touched everyone,” he said. “That’s the closest I've ever seen the Richard community.”

The saddest days at Gabriel Richard have only a slight connection with the Fighting Irish’s student cheering section, a finalist in this season’s MHSAA Battle of the Fans II.

But the collective camaraderie present as the school and community mourned signifies the solidarity that has made cheering at the “The Greenhouse” a decade-long tradition and regular part of student life.

“People who come through Richard or are around the Richard community, they say they see something different in how people interact with each other, how close we are,” Olszewski said. “It’s on a different level.”

And that togetherness was easy to recognize during the MHSAA’s Battle of the Fans visit Tuesday for the Fighting Irish’s boys basketball game against Madison Heights Bishop Foley.

Gabriel Richard – which finished sixth in the selection of five finalists for last season’s inaugural BOTF contest – was the third stop on this year’s tour. The MHSAA also has visited reigning champion Frankenmuth and Vandercook Lake, with trips coming up to Zeeland East and Buchanan before Facebook voting begins Feb. 19. The champion will be announced Feb. 22 on Second Half.

Olszewski’s memories of the Irish’s cheering section go back into the early 2000s. His oldest brother Jeff led it as well before graduating in 2008, and even before his family played a part, Adam remembers seeing mentions of the section in the local newspaper.

That recognition through the years has meant a lot to Gabriel Richard, which has 515 students and is much smaller than three Class A schools also sharing the city – Huron (1,810 students), Pioneer (1,670), and Skyline (1,645) – and its local media spotlight. 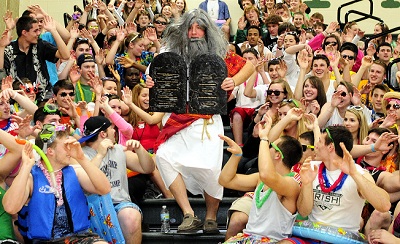 But in another obvious way, Gabriel Richard is different than its three larger counterparts. It’s a Catholic school, drawing students from multiple Catholic feeder schools, and in turn, multiple communities that border Ann Arbor.

Developing togetherness would seem to be difficult with students coming from various places each day. But the opposite has been true.

As Olszewski explained, the students at Gabriel Richard can find their own niches – sports, or drama, art or other interests. The classes also have retreats each year that bind them tighter.

At a school Gabriel Richard’s size, everyone knows everyone else at least by name or face, and at one point Tuesday the cheering section chanted for a cheerleader by name, at other times did the same for individual players, and Olszewski jokingly scolded individuals throughout the section as he led the cheers and kept the group organized.

The Irish cheerers can be found just about everywhere, even when multiple teams are playing on the same night. On Friday, a spirit bus will take students to the school’s hockey game before bringing them back to watch the boys basketball team. The section has shown up plenty of other places from Comerica Park for the Catholic League baseball final to the school’s powder puff football games.

“We’re definitely bonded,” senior Aaron Tishkoff said. “As a student section, we pride ourselves like that. … I had a friend ask, why can’t we do this at our school? People just won’t do it. And we’re like, we've always done that. That’s just what we do at basketball games.”

“When I got here, the first few (games), it was a lot different,” said senior Blaise Stearns, who transferred from another area school midway through last year. “Everyone comes here and just has fun. You get more close with everybody.”

A major bonding point is the school’s annual "Masquerade for Mott," a fundraiser for C.S. Mott Children’s Hospital at the University of Michigan. In its fourth year, the event includes nearly two weeks of fundraisers and cheering section theme nights, with the main event next Tuesday’s boys basketball game at Detroit Catholic Central – which joined with Gabriel Richard last year to create a fundraising competition.

A friend of Olszewski’s died last year from a heart condition, and he visited Mott to present the check from the 2012 "Masquerade." On Friday, the cheering section will have a “Zebra Night” in honor of Bridget, who was a big fan of the Gabriel Richard football team and whose favorite animal was a zebra.

Although Bridget’s older brother is an underclassmen at the high school, most of its students didn't know her. But they did know her story and felt bonded by being part of Gabriel Richard – and coming together in her honor again Friday will mean a lot.

Like they have this week for “Superhero Night,” “Beach Night,” and “’70s Night,” they’ll join together to have a good time for a good cause. The message is simple: This is fun. This is what we do. And this is what we'll continue to do when the next class takes over leadership at the front of the crowd.

“It’s a positive attitude, especially if they see the senior guys like us having a positive attitude. It’s really easy for them to follow,” Wolf said. It’s been a tradition here for so long. It’s not that hard for us to do. Kids know it’s Friday night, we go to a basketball game. That’s what we do; we go and have fun and we participate in the student section.”