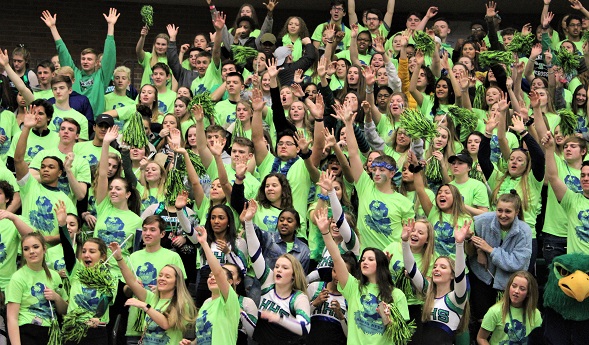 SAGINAW – Three years ago, Saginaw Heritage teacher Melissa Fila showed up at Bay City Central, tub of pompons in hand, ready to rev up her students who had made the trip to support the Hawks boys basketball team.

She found three huddled together and two more sitting with their parents. That was it.

How things have changed.

When Central visited Heritage this Jan. 18, the Hawks were filming a congratulations to the eight semifinalists joining them in the second round of this year’s MHSAA “Battle of the Fans VIII.” The stands behind Heritage’s home basket hold roughly 400, and they were packed.

From the humblest of beginnings, Heritage’s student section has grown into a Saginaw Valley League force and the first from that conference to make the BOTF finals. Thanks to a significant boost in “leadership” – much more on that below – the Hawks Nest has become the place to be for many of the school’s 1,500 students.

“This year I’ve seen a total change with people in the student section,” senior Khayli Bracey said. “Everyone is more confident than in past years. You don’t have to be like, ‘Everyone cheer.’ Everyone’s just doing it. Nobody’s necessarily telling people what to say, how to say it.

We heard that buzzword more than a few times as we met with section leaders Bracey, fellow seniors Shelby Vondette and Josh Frank, juniors Abbey Coenis and Dom Simpson and sophomore Brendan Trier before Friday’s girls basketball game against Midland Dow to find out what’s made the Hawks Nest take flight this school year.

We’ll report on all three of our BOTF finalists visits this month following the format of a typical game night. We kick things off below with some of the Hawks Nest’s suggestions for other student sections hoping to grow, followed by the video from our visit and then more of a story behind Heritage’s rise.

Take some of these tips from the Hawk’s Nest:

Just get started. A gathering of just a few students to watch games can snowball into something more. Don’t be intimidated or afraid. Grab some friends, maybe pick out a theme to dress alike for a game, and see where it goes.

Team up with a teacher. Or an administrator, advisor, coach, etc. Working together with someone who can serve as a champion for your section to the rest of the faculty and administration is invaluable – as is having someone with whom to bounce around ideas.

Care, then don’t care. Care enough to be there, to cheer on your classmates, to make the effort to get more people involved. And then don’t care – what you look like when you’re dancing, how silly the chants might sound. Just join in and enjoy the ride.

Get everyone involved. Heritage’s leaders were adamant that the main difference in this year’s section is the enthusiastic contributions from underclassmen. We’ve learned this from many finalists over the years – the best student sections have plenty of seniors and juniors, but also welcome plenty of sophomores and freshmen.

Be unique. Be creative. It’s getting harder to come up with original cheers. Heritage has taken its share from others, including Iceland’s soccer national team supporters and the NFL’s latest ad campaign. But the Hawks Nest also benefitted from an early-fall leadership “day camp” where students were assigned to come up with new chants – and produced the section’s current favorite: “Ooh! Ah! We’re the Hawks of Saginaw!”

Heritage has offered a “Leadership Development” class for decades, and Fila has taught it for most of this one. Her students take part in some awesome projects – like for Veterans Day putting out 10,000 American flags on the school’s lawn to represent Saginaw soldiers, or directing coat and prom dress drives and an “Amazing Race” that most recently netted $15,000 in local donations.

Beginning with the 2016-17 school year, Fila’s Leadership classes also began working on ways to lead more students into the stands.

Heritage had good student sections in the past. The Hawks football team made the playoffs four out of five seasons during the mid-2000s, and students turned out to cheer. Vondette said hockey games have always been crazy – especially as the team has joined the state’s elite over the last few years. The girls basketball team has a long history of success, but she remembers students especially starting to show up during the Hawks’ run to the Class A Semifinals in 2015 when she was in eighth grade. “I feel like everybody got the idea that’s what a student section should be like when they went to a game like that,” Vondette said of that run.

Enter the Leadership class. In addition to all of the good stuff students continued to do in the community, Fila helped them begin to organize a student section – sparking ideas on persuading their classmates to give it a try, guiding code of conduct discussions to make sure students were cheering in a positive manner, and most of all empowering them to create something that would have an impact.

At first, the reborn section was made up of a group of sophomore and junior boys who liked sports. But it quickly grew. So did the Leadership class – last year Fila began teaching an “Intro to Leadership” for underclassmen, and that class allows them to get involved in the student section planning earlier.

There are 200 students taking a Leadership course each semester, and roughly 50 percent of the student body has taken one of them at least once. That means 50 percent at one time have had some hand in helping plan student section activities, putting together presentations on how to do cheers for the rest of the student body, or helping the Hawks Nest apply for Battle of the Fans the last three years (and make "Challenge" videos like the one below).

This fall’s MHSAA Sportsmanship Summit energized section leaders further. But what brought us to Heritage for this BOTF finals may have started during last season’s girls basketball run – the Hawks defeated East Lansing to win the Class A title in front of a sizable group of students at Calvin College’s Van Noord Arena.

“The girls winning the state championship. We took busses. There were so many kids there, and it was just such a good environment,” Simpson recalled.

The Hawks Nest filled with 250 students for our visit Friday for one of the most highly-anticipated girls basketball matchups of this regular season. Home games, as at any school, are the top draw, and Simpson said he’s seen fans going not just to basketball, hockey and football, but also soccer, volleyball and even once to a bowling match.

For this night, it’s important to keep in mind that those 250 attended while the boys basketball team was playing at Midland Dow and hockey team was taking on Birmingham Brother Rice in a high-powered matchup at the Michigan Interscholastic Hockey League Showcase in Trenton. And what’s more, Heritage didn’t have school Friday – giving fans a great reason to stay in for the night.

That wasn’t going to happen with Frank at the video controls.

He spends game nights with a camera in hand, and his skills have taken the Nest’s marketing up a level. Many games are previewed with a short Twitter video announcing the theme or other important information. Then he shoots at every game, building a library of hype videos to keep classmates engaged – and help him put together a strong BOTF application.

“We always said, the intention last year, since we didn’t go on (in BOTF), this year’s we wanted to make it a really jaw-dropping moment,” Frank said. “So right from the beginning of the school year, we were going to start filming and get everything.”

The theme Friday was “EXTREME” and that meant lots of lime green as students received a free T-shirt with student ID. The Nest also included a pep band, two pom teams and the school’s mascot – and plenty of noise, all positive, and despite a fast start by Dow as it went on to hand Heritage its first loss of this season.

“It was a blast. There was just so much energy,” Trier said. “We do it every night. If we’re winning, losing, we still cheer on our team no matter what.

We’re in this together: “I feel like our student section is a more comfortable environment for younger people now. I know a lot more of the underclassmen now through Leadership, and I feel like we’re all one now,” Simpson said. “Our school revolves around Leadership and the student section now. Everyone goes to the games. It’s a culture for us.” 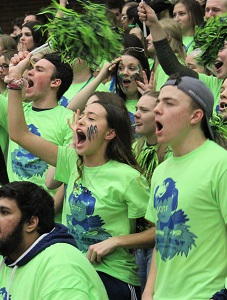 Multi-media marketing works: “When Josh will post videos, and you see everyone in the student section just screaming their heads off, you want to be a part of that,” Vondette said. “That’s what you want to do.”

One memory can make it happen: “At the girls state finals, I was in the front with Shelby, and we were the ones who started stuff, and I just remember (thinking), ‘I want to keep doing this,’” Bracey said. “I would never be the one to want to start cheers – of course I’d cheer along with everyone else, but I was never one that would want to lead a whole group of people. But after that game and seeing everyone getting involved, I was like, ‘I want to keep doing that.’ That was the turning point for me.”

The Nest is the place to be: “Because we make it look so fun,” Coenis said, echoing Trier that the section will just keep getting bigger and better. “The more hype you are, the more hype everyone around you is going to get too. It’s just going to spread.”