OWOSSO, Michigan (population 15,000) – To our town, the high school football program had been in a tailspin since its first playoff appearance in 2001.

A group of 24 seniors, 11 juniors and one sophomore decided to change that direction this fall.

Owosso, 3-6 in 2010 and 5-4 in 2011, had tasted success during the previous two years – especially considering our four straight 1-8 finishes from 2006-09. Although the program had not returned to the level of competitiveness set by teams of the mid-1990s, there was hope leading into this fall.

So naturally, during the spring and summer leading up to the beginning of practice, my teammates and coaches were bombarded with questions about this year’s team.  It was simple; if we played the way we knew we could, then we would have a great opportunity in front of us. And as the season rolled on, I came to understand just how much our town was cheering us on.

Growing up in a rural community in a family that has lived here since the turn of the 20th century, if I don’t know someone, someone else in my family knows that person. So I was tied in some way to many of the people packing the stands and hoping for us to achieve our lofty expectations.

Splitting the first two games and winning a nail-biter against Haslett, we landed ourselves at 2-1 to start. After two losses and a win, we found ourselves at 3-3 with three games to play: against Ionia, Birmingham Groves and Eaton Rapids. We had to win all three to make the playoffs for the first time in 11 years – and we pulled it off, with three of our four biggest wins of the entire regular season.

Next up was the Sunday Selection Show and more backing from our neighbors. For the event, the whole team and lots of fans went to one of our local restaurants that had supported us throughout the season. The show came on at 6 p.m., and we were pretty sure we were going to be in Division 3; we just didn't know who our opponent would be.

Finally it came across the screen: CADILLAC.  We were going to play Cadillac that Friday at 7 p.m. We were excited, but also a bit disappointed; the game was so far away. To us, this meant that we would not have a good crowd – just the die-hard parents would be willing to make the trip.

Soon, I learned just how much our team meant to the rest of our fans.

Our football team was the buzz of the school that week, but we tried to stay all business. We knew we had the opportunity to do what no football team in the history of our school had done before – actually win a playoff game. That thought alone drove us. We had the best week of practice since the beginning of the season. Everyone was sharp and focused on one common goal. But we still knew it was going to take a lot more than a couple good practices to win this game.

I stop at our local Speedway station, north of town, to get a coffee almost every day on my way to school. That Thursday, Nov. 1, was no different. Yes, it was the day before a game, but I was not about to break my routine.

I was standing in line with my large coffee waiting to pay when I heard a voice next to me. An older man, wearing old jeans and an old coat that had seen more winters than I had, looked at me and said, “Very proud of what you boys are doing.”

“Thank you,” I said, not expecting the conversation to go further.

“I've been to every home game this year, and I’ll be making the drive to Cadillac tomorrow too. Keep it up,” he then added.

I said thank you again, paid for my coffee and left. I then realized what had just happened

Suddenly, I was hit with a lot of questions. Who was this man? How did he know me? Did I know him and just forget? I then realized that I was wearing my varsity jacket, and that solved how he knew I was on the football team.

After stewing on it for a while, I came to the conclusion that no, I didn't know him, nor did he know me. But yet, he felt like he knew me, because of the jersey I was putting on every Friday at 7.

I posted about it on Facebook and told my team, but no one felt what I felt. He didn't know me from Adam. We very easily could have passed by, not knowing each other, and not caring much about it. But he didn't pass by; he stopped because I had on a blue and gold coat, and he was blue and gold in his heart.

To this day I don’t know his name, and I probably never will. But I know he was in the stands come Friday, cheering us on.

When Friday rolled around, the nerves set in. In fact, that day from 8 a.m. until the end of school was a blur.  But 2 p.m. did eventually roll around, and we got on the bus and started our 2-hour, 30-minute ride north to Cadillac. We had a police and fire truck escort to the outskirts of town, which was so amazing. As we neared the city limits, our coach stood up and told us to look out the window. Lining both sides of the street were our player signs, with everyone’s names and numbers on them. A local resident had done this so we could see them as we left town. That was our first hint that this was going to be different than any game we’d played in before.

With a few stops we rolled into Cadillac at 5 p.m. Chomping at the bit to play the game, we went into the locker room and came out about 6 to see the visitor stands already half full, while our two student buses hadn't arrived. We warmed up and went in the locker room with 15 minutes until game time.

When the time came for the National Anthem, we gathered two by two and trotted our way to the field. We quickly noticed our visitor stands were over-flowing with people, with the Cadillac stands not 60 percent full at kickoff. Owosso, a town 130-plus miles away, had more people in its stands than the home team. We were all so proud of our team, our coaches and our community. It was then that we realized just what this team meant to our town.

We won that game with a dominating second half; the Trojans of Owosso finally had their first-ever playoff win. Without a doubt, the mass of fans in the stands was remarkable, as was the way the team played that night.

I've been around Owosso football ever since I can remember, and the volume and energy that night rivaled our best home games. I don’t think there is a guy on our team who will forget that night, ever. I know I won’t, and I do not think our community will either. 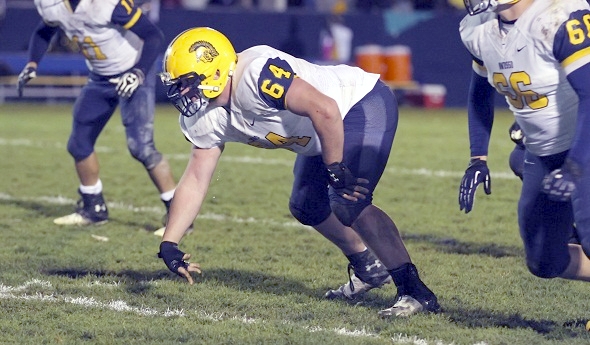 PHOTO: Owosso senior Matt Freeman begins emerging from his defensive stance during his team's playoff win over Cadillac this season. Freeman, a two-way lineman, was recently named Division 3 all-state by the Detroit Free Press and earned Division 3-4 all-state honorable mention from The Associated Press. (Click to see more from HighSchoolSportsScene.com.)