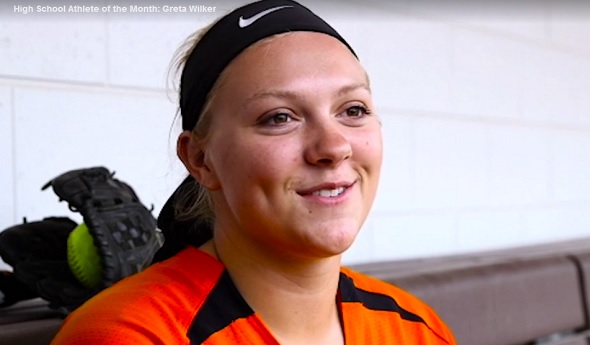 A nationally-known media giant like Sports Illustrated can seem worlds away from a town of fewer than six thousand just left of middle in Michigan’s Lower Peninsula.

Belding senior Greta Wilker figured the New York-based magazine would never find someone like her. But it did, and this week readers all over the world have the opportunity to find out why.

Wilker was chosen as SI’s High School Athlete of the Month for May, with the video below appearing at SI.com and an article to follow, she believes, later this week or soon after. Wilker was nominated for the award – she’s not sure by whom – and was first contacted by Sports Illustrated near the end of her basketball season in March.

A camera crew came to Belding in mid-April and spent two days shooting video of Wilker at school, training dogs at her Paws with a Cause class and then during her softball game and track & field meet. Another reporter came out the next week to spend a few more days reporting for the written story that will appear on the website and in part in the magazine this month.

“When you watch the other kids who got picked … some of the things other kids are doing are ridiculous,” Wilker said. “To think I was up at the same level as those other kids, it’s pretty cool.”

Wilker, a member of the MHSAA Student Advisory Council, has some pretty “ridiculous” achievements herself. She’s her class’ top student with 4.2 grade-point average weighted to include Advanced Placement classes, and she’ll graduate with 16 varsity letters – four each in volleyball, basketball, softball and track & field. In her spare time, she trains service dogs that are placed to assist people with hearing and other disabilities.

She will study and play softball next at Emory University in Georgia with another big goal in mind – she hopes to eventually become a pediatric orthopedic surgeon.