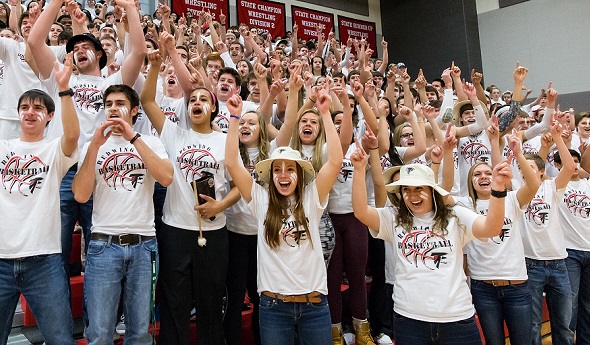 Alex Davis showed up in a Christmas sweater. Only four of her classmates dressed to match.

That same year, the school’s newly-formed Student Athletic Leadership Committee created a calendar for the winter highlighting theme nights and other games they hoped would draw a big student crowd. The calendar was gone by the next day, torn down by older students who wanted to continue doing their own thing – which generally included yelling at referees or the other team, and not always in the most flattering ways.

Before St. Johns could compete to be called the state’s best student section, the SALC had to convince their classmates there was a better way.

And finally, this winter, they’ve broken through thanks to a blueprint other student leaders would be wise to follow.

“It’s something where you have to be able to have a voice and you have to be able to want to make the change and want to make the difference,” Davis said. “Because you can go to all of these meetings and do everything. But at the end of the day, if you don’t want to do it, there’s no way you’re going to carry it out and help other people to do it.”

St. Johns hosted the fourth stop Friday of this year’s MHSAA Battle of the Fans IV finalists tour. The MHSAA also has visited Beaverton, Yale and Buchanan and will journey to Dowagiac on Friday, with the naming of this year’s champion Feb. 20.

The public may vote for its favorite on the MHSAA’s Facebook, Twitter and Instagram sites beginning Feb. 17, with the MHSAA Student Advisory Council taking results into consideration when selecting the champion after the vote has concluded.

St. Johns’ appearance in the contest wasn’t a thought in the fall. But a spot among the final five might not mean more to any of the contenders. More than 200 students rooted on the Redwings’ basketball teams Friday – a testament to the work that’s been done and the changes that have been made as the section has been transformed.

Athletic director Chris Ervin started the Student Athletic Leadership Committee during the fall of 2012 after a group of students attended an MHSAA Sportsmanship Summit in Lansing that focused in part on the previous winter’s inaugural Battle of the Fans competition. 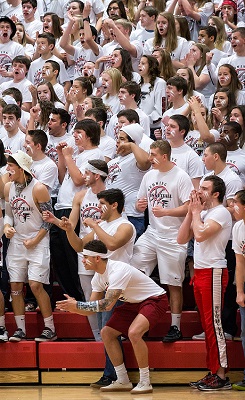 At that point, St. Johns students generally showed up for games, at least for the football and boys basketball teams. But there wasn’t a lot of cheering, or cheering in the most positive way.

The committee came back from the Summit with great ideas. But a group of then-seniors already was in place as leaders of the section – and the SALC’s entrance into the conversation was mostly ignored.

The SALC was created in large part to lead the student section toward more positivity, sportsmanship, inclusion of all grades. After this football season, the committee was close to giving up.

“If everyone is against us, why are we trying to force something upon them that they don’t want?” St. Johns junior Jake Eaton recalled asking. “If we were going to just bring negativity, we didn’t want to do that.”

“Standing up for this group, standing up for what we’re doing, was the hardest thing,” junior Jessica Hafner said, “and the best thing.”

The SALC again attended an MHSAA Sportsmanship Summit, in November in Grand Rapids. They again came back with plenty of ideas – and a stronger, more experienced group to push them through.

The original SALC was 12 students, three from each grade. The committee invited three more from the rest of the student body.

“At first, it came (across) like we were trying to take over the student section. We weren’t trying to take it over. We were just trying to make it more positive,” Davis said. “We invited some of those people in our group. That won them over. We got them in, changed their ways, and they went to their friends. It’s worked.”

The SALC got its message out to a school-wide captive audience by holding a pep rally before the boys and girls games against DeWitt on Dec. 12. That allowed the SALC to show off their new philosophy – and some new cheers – to the entire school, which in turn got some younger students interested who might not have showed before.

The SALC then took advantage of a key opportunity. In St. Johns’ league, the Capital Area Activities Conference, the boys varsity basketball teams play first on Friday nights, followed by the girls. The students who weren’t embracing the changes usually left after the boys games – leaving the SALC to work with those who stayed to cheer on the girls.

It was at those games that the new section began gaining a foothold. Applying to Battle of the Fans, and the excitement after students saw the video, gave the SALC’s effort another boost.

“At first, we struggled to get participation,” said senior Austin Ervin, who stays after his basketball games to lead the section. “Once we got coordinated cheers that were fun and everybody realized what it was like to have fun and be positive and not just scream at the officials and teams, I think people started talking at school; ‘You should come to this. It’s a good time.’” 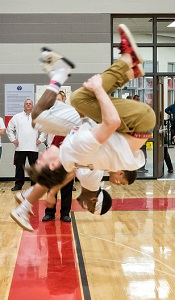 The student attendance at girls games continued to grow during the first half of this season, and the section’s new setup transferred to the boys games. St. Johns filled a section with high schoolers and nearly another with middle schoolers for Friday’s against Haslett; although a few rows at the top emptied, the majority of the crowd stayed to cheer on the girls. The section also has made an appearance at a wrestling match to cheer on a team that has won four MHSAA titles over the last five seasons.

Hafner, a basketball player, said the support is definitely making a difference on the court; the boys basketball team, at 7-7, is on pace to equal last season’s record, but the girls team, at 10-6, already has surpassed its 2013-14 win total.

St. Johns’ student section has come a long way in a short time, but the potential for growth seems limitless in a school of nearly 1,100 students. There’s a buzz in the halls and plans for the future now that changes have finally gotten started.

“I grew up in high school only knowing this (negative) stuff,” Eaton added. “Once we all matured in this situation, we have this year and next year and wanted to push it through and get it going before we left. Seeing how we came together for that video, it was definitely worth it, definitely something we could push for that next year and try to do better.”

PHOTOS: (Top) St. Johns students cheer during Friday's boys basketball game against Haslett. (Middle) The Redwings' student section reached to the top row while filling one full section and part of another of the school's gym. (Bottom) A trio of students energize their classmates with back flips Friday. (Photos courtesy of Jack Heckaman/jaxxphotos.com.)