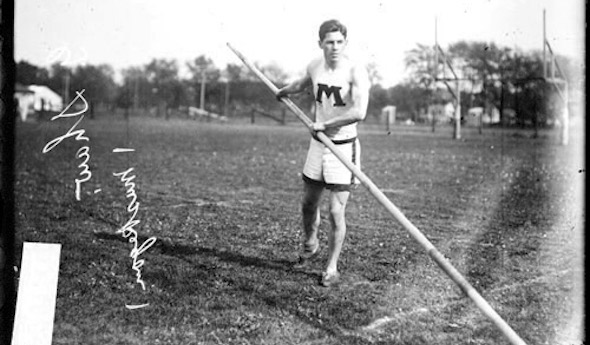 By Ron Pesch
Special for Second Half

High school athletics leaves behind an amazing array of treasures – although while buried in a keepsake box, or trophy case, the awards stand silent.

For many, their meaning and worth only continues to grow in value. Yet, in other cases, time can be cruel. For some trophies and trinkets, their worth diminishes as the stories contained within are lost behind retirements, neglect, administration decisions and death.

Following are a few tales that live on from more than a century of Michigan high school sports. 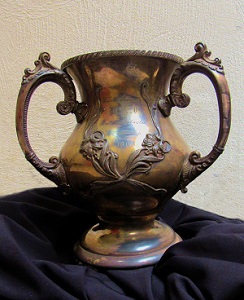 The search continues for the oldest state title trophy presented to a high school in the state of Michigan. This beauty, on display at Muskegon High School within the school’s storied trophy cases, currently leads the pack.  In 1909, Muskegon coach Robert Zuppke’s team tallied 43½ points to win the fourth annual Michigan Agricultural College Interscholastic meet in Lansing. The total was the largest sum in the history of the meet, exceeding Detroit University School’s total of 27½ points and Detroit Central’s third-place total of 25 points.

Zuppke moved on a year later to coach at Oak Park, Ill., then to the University of Illinois where he became known as one of the great coaching minds in the history of college football. Shaw would school at Northwestern University while Cowley spent some time at the University of Chicago following graduation. 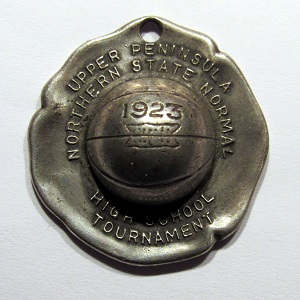 Someone within the Dollar Bay roster was once the proud owner of this silver basketball fob, given to team members by Northern Michigan Normal College for finishing second in the 6th annual Class B High School Basketball Tournament hosted at Northern State Normal College. According to documentation on the event, six sessions were held, and during presentation of the awards, only seven fobs were awarded to each of the top three teams. As was quite common at the time, only last names of players were mentioned in the game program and newspaper coverage. I guess back in the day, everyone who needed to know already knew the player’s first name.

Purchased on Etsy, perhaps this medal was owned by Stevens, who played one of the guard spots and served as team captain. He was responsible for all nine of the team’s points in the Class B championship game.  Perhaps it belonged to Penphrase or Mattson, who each scored four points in the semifinal round, where Dollar Bay trounced Stambaugh 21-12. Munising defeated Newberry 15-10 in the semifinal, setting the stage for the title game. Munising won the Saturday evening contest, 17-9, and earned the right to play the Class A winner for the “supremacy of the Upper Peninsula." One week later at the Normal Gym, Munising topped Escanaba, winner of the Class A tournament, for the honor. 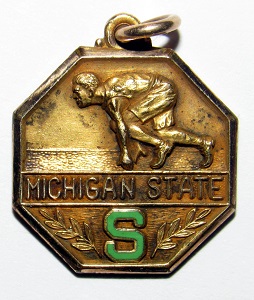 Along with his brother Phil, Joseph Perry Austin was one of 20 graduates in the class of 1927 at Three Oaks High School (Today known as Three Oaks River Valley). The most famous of the group was perhaps Joe Savoldi, who would star at Notre Dame.

The Austin boys moved to Three Oaks from Waukegan, Ill, when they reached high school age. There, Perry, as he was known among family and friends, would excel athletically and academically, winning the Class C MHSAA state championship in the mile and serving as valedictorian of his class. Phil was salutatorian. This medal, presented at Michigan State College of Agriculture and Applied Science (now Michigan State University) was found on Ebay.

Following graduation, Perry attended the University of Michigan, where he was crowned Big Ten Champion in the two mile in 1931. That same year, Austin was honored by the Big Ten with the conference’s prestigious Medal of Honor, awarded one per sport, for athletic and academic achievement in Track & Field. He would remain at Michigan, earning a doctorate in chemistry in 1935.

After graduation, he worked for Abbot Labs in Chicago. In the 1940s, Austin joined the seminary and became an Episcopalian priest, serving parishes in Wisconsin, Texas and Michigan. Ultimately, he returned to education, teaching high school chemistry in Toledo, Ohio. He passed away in 1991.

His brother Phil would ultimately become an internationally renowned watercolorist and a member of the exclusive American Water Color Society.

As the story goes, Merrill High School students built this scoreboard in shop class sometime during the late 1930s for use in their high school gymnasium. The board served the district for approximately the next 50 years. “It was always an honor to be selected as one of the kids to operate the scoreboard,” recalled Keith Clark, a former Merrill student who in later years served as a coach, then administrator in the district. “One kid would operate the home side and the other would operate the away side.”

When the new high school opened in 1956, the scoreboard remained in place at the building where it served junior high school teams until the 1980s. It was ultimately presented to Walt Krause, a longtime employee of the Merrill school district. Thanks to the efforts of Clark, and the kindness of the Krause family, the board eventually made its way to the Saginaw Sports Hall of Fame with a single stipulation – that the score displayed should always show Merrill leading. 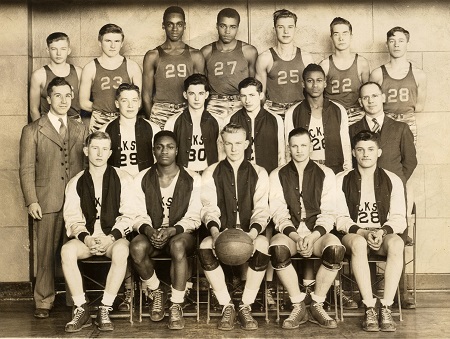 A scan of a photo cherished by the son of one of the team members, this team picture would likely go unnoticed mixed in with a stack of others. Yet, standing in the back row, wearing number 27, is an individual with a likeness, and most certainly a voice, that would be recognized by tens of millions. The Brethren Dickson basketball team of 1947 was eliminated early in the tournament. The 1932 team finished the year as runner-up to Portage for the Lower Peninsula’s Class D title. In 1963, Brethren lost in the state semifinals to eventual Class D state champion Britton.

Using his full given name, one can argue that James Earl Jones ranks with Earvin “Magic” Johnson as the state’s most famous basketball player, though his fame is for something entirely different than his ability to shoot a basketball. 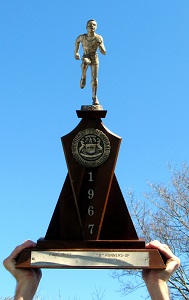 Found at a thrift store in Ann Arbor, it was purchased for $2.12, tax included. Showing its age, the trophy was earned by Ann Arbor University High’s track team that finished second to Detroit St. Charles.

Ann Arbor University High was a demonstration school operated by the University of Michigan’s School of Education. In 1922, the State of Michigan legislature approved $525,000 for the construction and furnishing of the building near the campus of the university. In the fall of 1924, the school was opened with 123 students in grades 7-12. In 1930, an elementary school was added. According to U-M’s Bentley Historical Library, “the school was used as a demonstration center for educators in the newer practices of educating children.”

University High’s athletic teams were nicknamed the Cubs, an obvious nod to the University of Michigan’s Wolverines. University High continued to operate into the 1960s, when a decision was made by U-M’s School of Education to close the school.

The 1967 team, led by Dave Shipman, finished second to Detroit St. Charles in point total, 64 to 47. Shipman, an individual winner in both the 100 and 220-yard events, also ran on University’s victorious 880 relay team. A year later, the final senior class graduated from the school. 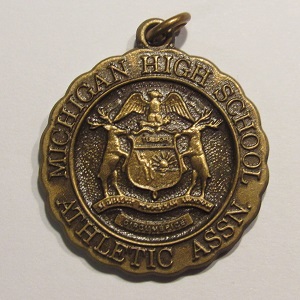 This medal dates to the days when champions were crowned in volleyball in both upper and lower peninsulas of Michigan. (In the year 2000, the tournament was unified.) This is another Ebay find.

Between 1980 and 1990 the U.P. staged a single open tournament for all schools north of the Mackinac Bridge. Despite competing against schools with much larger enrollment, the Brimley Bays captured seven titles during those 11 years of competition. Located just off I-75, coach Charles Compo’s team traveled extensively into the Lower Peninsula to gain experience. The time and travel paid dividends as the team captured five straight titles between 1981 and 1985. The 1984 title came with 15-3, 15-11 wins over Bessemer. That season, Compo was named U.P. Coach of the Year.

“Compo retired in 1990 with an amazing record of 408 victories and only 74 losses,” notes the Upper Peninsula Sports Hall of Fame, recognizing the achievements of those squads. “Seventeen of Compo's players would earn all-state honors, a total of 32 times.” 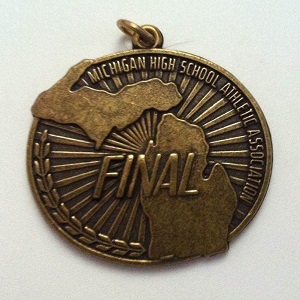 “When the boys on the football team got whiny about practice, their coach would bring them to one of our practices,” remembered Allison Pall, discussing the hours spent training before earning this medal as a member of the East Grand Rapids 200 medley relay team. Those practices were run by legendary swimming coach Milton “Butch” Briggs, Jr. Since taking on the task in fall of 1975, Briggs has led the girls to 19 MHSAA championships and the boys to 10 titles.

Pall, along with schoolmates Ally Bremer, Molly Lundquist, and Karly Surman won the 200 medley relay with an MHSAA Finals time of 1:50.09 at Eastern Michigan. A year later Pall, Bremer, Emily Lundquist and Katie Lachance again won the 200 medley relay, at 1:48.82 at Holland Aquatic Center. The girls clocked a 1:48:75 in the prelims the day prior, establishing a then-school record.

A late beginner in the sport, Pall took up competitive swimming in seventh grade. Following high school graduation, Pall headed to Ann Arbor to enroll at the University of Michigan, where she left behind her swimming career. Her height, an advantage in swimming, meant she was recruited to join the University Rowing team. She stayed for a season, deciding to dedicate herself to studies. Today, Allison is in pursuit of her Master’s degree in Public Health. Her medals will not be found for sale online. They still mean the world to her.