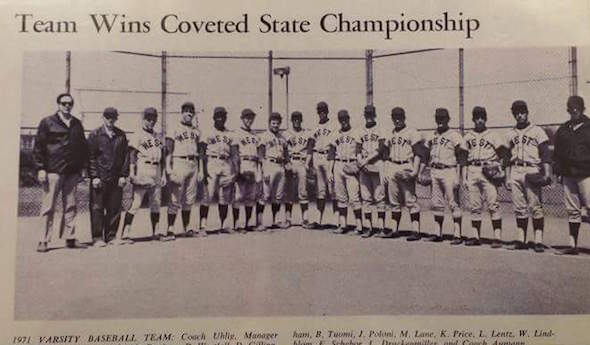 By Ron Pesch
Special for Second Half

“It’s a big one,” said state director of athletics Al Bush, when asked about organizing the Michigan High School Athletic Association’s inaugural baseball tournament back in January 1971. “The idea has been under study for more than three years.”

After discussions with the MHSAA Representative Council, in mid-December a committee of seven coaches from various parts of the state gathered and built the framework for the tournament, according to Associated Press reports.

Still ranked among the Top 10 all-time fall classics, the Detroit Tigers’ 1968 World Series victory over the St. Louis Cardinals meant interest in the national pastime was on the rise in Michigan.

Bush noted that about 650 Michigan high schools had sponsored baseball in 1970, and that plans for organizing the pending tournament were much like those for basketball, with Districts and Regionals. Circulars sent out by the MHSAA asking about planned participation indicated nearly 500 schools intended to play in the tournament. As in other sports, except basketball, plans were to host separate tournaments for the Upper and Lower Peninsula due to weather conditions experienced above the Mackinac Bridge.

While a number of cities in the past had hosted baseball tournaments where schools from around the state had been invited to participate, the MHSAA had never previously sponsored a statewide tournament. Perhaps the most well-known was one hosted in Battle Creek for about 10 seasons in the 1940s and 1950s.

In April 1971, Districts were announced, with qualifying round play scheduled for May 17-27 and Pre-District contests planned for May 29 that would allow the field of teams to be cut to four for the Districts. A total of 594 teams entered the Lower Peninsula tournament. The Finals for all classes were scheduled for June 19.

“I think you could draw it out of a hat and call a certain team a favorite, and you’d be correct,” said MHSAA Associate Director Vern Norris 45 years ago when discussing the uncharted territory of that first tournament. “There’s just no basis for comparison. I think we can say the teams competing Saturday are the cream of the crop, although in any tourney competition some good teams are eliminated early.”

“Overall, we’ve been very pleased,” he continued. “No. There haven’t been any major problems. The umpiring has been good and the support from the schools excellent. The person who really helped us out was the weatherman.” 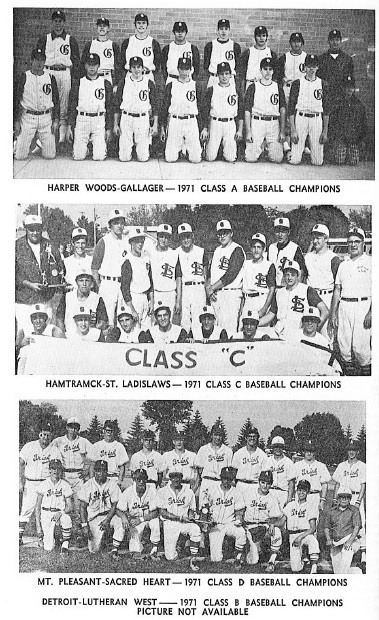 All 48 Regional games were played without a hitch. In years past (and in years to come), weather had played havoc with previous tournaments.

Four sites were used for the games. Class A was played at Wyandotte Memorial Field, while Class B was hosted at Battle Creek Central. Class C contests were scheduled at Marshall High School with Class D at Central Michigan University’s Alumni Field in Mount Pleasant. Semifinal games were scheduled for 10 a.m. and 12:30 p.m., with finals scheduled at 3:30 p.m. at each location.

The Detroit area emerged with three of the four titles, with games played beneath hot and humid weather.

Jim Saad, recruited to Colorado State to play football, smacked a 355-foot two-run homer to left field in the opening inning of the Finals as Harper Woods Bishop Gallagher blanked Royal Oak Kimball 3-0 before 1,200 fans for the Class A crown. Greg Boos tossed a two-hitter for the Lancers, striking out 10 along the way. It was the first of three Class A baseball titles won by Gallagher and their coach Jim Bresciami, who would lead his teams to 545 wins between 1965 and 1985. The Detroit Catholic League’s First Division East champion, Gallagher finished with a 32-5 record on the year. Right-hander Boos ended the season with an 11-2 mark.

Detroit Lutheran West posted 24 wins against a single defeat, scoring a 4-1 win over Pinconning for the Class B title. A bases-loaded single by Fred Schebor in the fifth inning brought in two runs to break open a 1-1 tie. Bill Lindblom was responsible for West’s other two runs, driving in runners with a single in the second inning and a double in the sixth. Junior Leon Druckenmiller struck out six and scattered six hits for the Leopards for the win. Earlier in the day, John Paloni struck out 18 batters in West’s 3-0 Semifinal win over Wayland.

Hamtramck St. Ladislaus took advantage of a pair of third inning errors, scoring two runs in the team’s 3-0 win over Dearborn Sacred Heart. Tom Crepeau pitched a four-hitter and struck out seven, while Paul Janas led the victors with two singles and a double in the Final. The win avenged a pair of nonleague losses to Sacred Heart during the regular season. Rick Radzinski pitched a two-hitter and drove in three runs in Ladislaus’ 7-1 Semifinal win over Sanford-Meridian.

Managed by 1952 alumnus Jim Powell, Mount Pleasant Sacred Heart rebounded from an early 8-1 deficit in its Semifinal game with Marion for a 16-12 win, gaining a birth in the Class D championship game against Portland St. Patrick. The Irish’s Roger Therman then pitched a four-hitter in a 5-1 win over St. Patrick.

To the north, with its later thaw, the high school baseball season continued to revolve around summer American Legion baseball but also two U.P. high school leagues: the Eastern Upper Peninsula High School Baseball League (EUP) and Western Upper Peninsula High School Baseball League (WUP). In its 14th year of operation, the WUP saw Ironwood post an 11-1 record against six league opponents to earn the 1971 league championship, while Rudyard repeated as champs with a 12-4 season in the nine-team EUP.

Today, the U.P.’s most famous baseball player remains Kevin Tapani, a 1981 graduate of Escanaba, who pitched for 13 years in the Major League. Tapani quarterbacked the Escanaba Eskymos to the MHSAA Class A football title in 1981, yet never threw a pitch for his high school because of the weather.

Forty-five years later, Mother Nature continues to influence baseball in the Upper Peninsula – although over time Upper Peninsula schools began taking part with those from the Lower Peninsula in a statewide MHSAA Tournament. The first U.P. team to make the Semifinals in baseball was Sault Ste. Marie in 1988.

This season, 21 Upper Peninsula schools sponsored varsity baseball teams, as gradually some have brought back programs long in hibernation – Gladstone, for example, made the Division 3 Semifinals in 2014 after bringing back a baseball program the year before that hadn't played since 1959.