Not while he took a no-hitter into the sixth inning, and not while going 3-for-3 with an RBI at the plate.

“It's starting to set in now,” he said with a nervous laugh.

Parks held Grand Rapids Christian to one hit, an infield single by Nathan Hedlund, walked three and struck out nine.

"With him on the mound, him at the plate, him in the field, we always feel very, very comfortable," Hawks coach Ian Hearn said. "Our motto all year has been 'Team,' be servants for one another and serve one another."

"They’re very talented," Hearn said. "They have a lot of very good baseball players, and coach (Brent) Gates does a really nice job. They kept us in check." 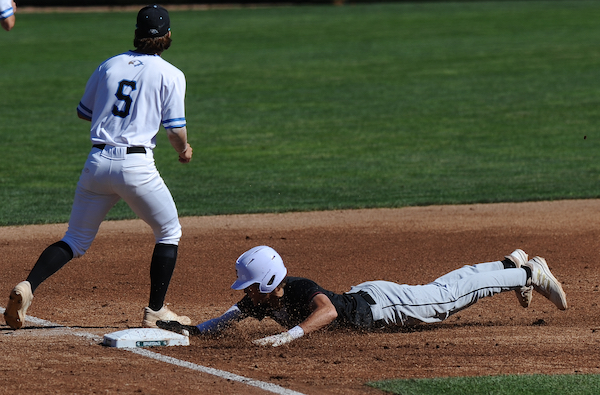 Parks drove in the only run the Hawks would need in the third inning. With two out, Caleb Kuiper singled and scored on a double by Parks off the fence in right field.

The Hawks added single runs in the fourth inning on a groundout by Max Ferrick, and in the fifth inning on a single by Leo Hearn.

“Hats off to them,” Gates said. “Their pitcher did a great job on the mound. We battled. We competed. We just came up short.”

“We had amazing chemistry,” Hearn said. “Right out of the gate, they competed well. We knew we were a pretty good team. I’m super proud of them and super proud of the way they handled themselves all season long.”

Parks, for his part, stayed focused, admitting he didn’t know he had no-hitter until the fifth inning.

“I just threw strikers,” he said. “That’s what it comes down to. That’s how you get outs. We worked real hard all summer, all fall, all winter, even all spring and we finally got it done.”