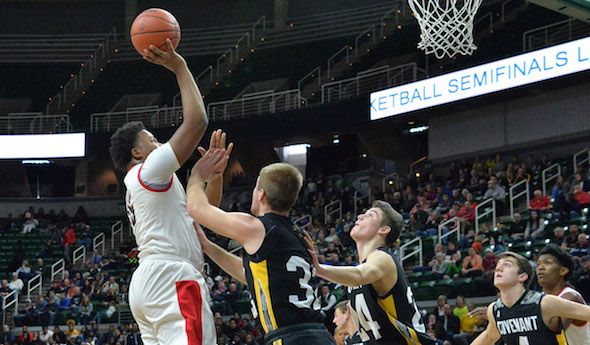 “I wasn’t really concerned at all,” Edison senior guard Pierre Mitchell, Jr., said. “We’ve been through this the whole season. We play in the PSL. It’s a whole bunch of tough battles every Tuesday and Friday.

In fact, the Pioneers won the Detroit Public School League tournament this season. And that experience no doubt helped them earn the chance to play for their first MHSAA boys basketball championship.

Edison broke away over the final four minutes Thursday for a 55-43 win, launching a 14-1 game-ending run after the Chargers had come all the way back from the earlier double-digit deficit.

“I have seniors here, and these guys do a pretty good job of keeping guys focused on what we need to do and when we need to do it,” Edison coach Brandon Neely said. “I had confidence these guys were going to rise to the occasion.

“We were going to just maintain composure. We’ve been in a lot of tough battles this year, but we’re battle-tested. We’ve had teams come back on us before. We’ve lost some games that way. We’ve lost a game just about any way you could imagine. … (but) we always competed.”

The Pioneers have won 10 of their last 11 games, which means they started 6-9 – and they finished fourth in their PSL division, which also included two Class A, a Class B and another Class C school.

But lessons learned from those defeats helped Edison weather Covenant Christian’s comeback and the momentum shift that could’ve come with it. 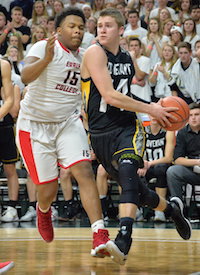 The Pioneers moved on with senior center Deante Johnson playing only 20 minutes because of foul trouble. They held on despite hitting only 35 percent of their shots for the game.

Instead of folding during Covenant’s comeback, Edison got help in the post from senior guard Gary Solomon, who finished with team highs of 15 points and 10 rebounds. And they climbed out of their cold shooting to make 5 of 11 tries from the perimeter during the fourth quarter, including 4 of 5 during the run to close out the game. Johnson came back to score the first five points of that final stretch.

“I work on (shooting) every day, and I had to come up big for my team,” Johnson said. “I was in foul trouble all throughout the game. I wasn’t the presence in the middle that I’d usually be. So I had to make it up somehow, some way in the fourth quarter for my team.”

As a team, Covenant Christian (22-5) shot a nearly identical 35 percent to the Pioneers, but made 9 of 13 attempts to knock down the 16-point deficit over the first 12 minutes of the second half.

But as the Pioneers closed on a roll, the Chargers finished making just 1 of 6 shots and turning the ball over twice.

“We knew we had to shoot it well today, and we didn’t in the first half and I thought that cost us,” Covenant Christian coach Tyler Schimmel said. “In the second half, we started playing Charger basketball.

“We changed a few things defensively (at halftime), but not many. For some reason, we were timid early on. We thought we were just as good as Edison, and they’re a good team. The shots just didn’t fall for us.”

Mitchell added 13 points for Edison, and senior guard Keith Johnson was key off the bench with 10 points on 4 of 8 shooting over 14 minutes.