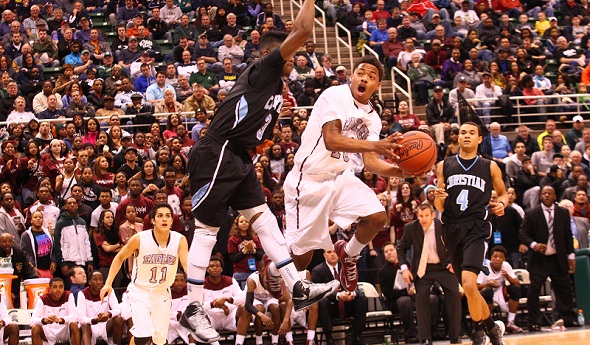 EAST LANSING – Romulus made three trips to the MHSAA Semifinals from 2008-12, and missed out on three championship game berths by a combined five points.

How focused are the Eagles on finishing the job this time around? Consider how they started and finished Thursday’s 76-67 Semifinal victory over Grand Rapids Christian.

Romulus jumped out to a 10-0 lead over the first two minutes from which Christian never recovered. And after the final buzzer, it was impossible to tell which team had just earned a chance to play for the Class A championship.

“We all know what it feels like (from) when we lost to Rockford (last season). We know we should’ve won,” Romulus senior E.C. Matthews said. “We’re all playing with a chip on our shoulders. Everybody came in with a mentality to win.”

Romulus (26-1) will face either reigning champion Saginaw or Detroit Southeastern in Saturday’s noon Final. It will be the first championship game for Romulus since falling by three to Holt in 2005.

Romulus reached the Semifinals in 2008, 2009 and 2012, losing by two in overtime and then by one in each of the next two games, respectively. Romulus also made the Quarterfinals in 2011. It does own one championship, from 1986.

“It feels good to finally get back to the championship. … These guys have kinda made that their goal,” said Romulus coach Nate Oats, who has led the program to all but its first trip to the Finals. “They’ve worked extremely hard to put themselves in the spot they’ve put themselves in.

"We’re a lot more focused. We’ve got pretty mature kids who come in with a business-like mindset.” 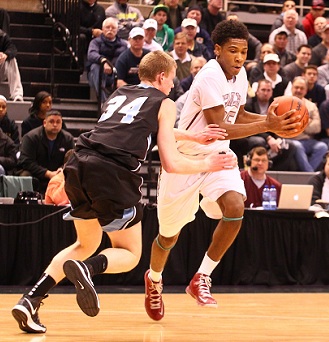 And that effort this time was led by Matthews, who has signed with Rhode Island. Oats said he’ll play point guard at the college level, but Romulus has a college-caliber point guard too in Missouri recruit Wesley Clark. So Oats moved Matthews to wing this season, and he more than doubled his team-leading scoring average (16.2) on Thursday, finishing with 37 points on 17 of 26 shooting from the floor. As a team, Romulus made 48 percent of its shots and scored 20 points on the fastbreak.

But similarly clutch was senior guard Lowell Wade, who was responsible much of the game for covering Grand Rapids Christian junior Drake Harris.

The hero of the Division 4 Football Final in November, Harris has seemingly upped his already-substantial game to go along with Christian’s recovery from a 2-4 start and run to East Lansing. He had 25 points in Tuesday’s Quarterfinal win over Muskegon and scored 25 more in the Semifinal – which he said was his final high school basketball game as he plans to enroll early at whichever college he chooses to continue his football career.

Two of Harris’ points pulled Grand Rapids Christian within six of the lead with 5:29 to play. But that was the closest he and his Eagles got during the game’s final 12 minutes.

“Drake’s been a go-to guy, a tough matchup. They forced us into some tough shots, but it was one of those nights,” Grand Rapids Christian coach Steve Majerle said. “If we did it all over again, we’d probably do the same thing, just do it better. They did better what they do than we did what we do.”

Grand Rapids Christian finished 20-7 and won 10 straight before Thursday. “If you’d seen where we started and where we ended, it was like night and day,” Majerle said. “If you saw our first game, we’re not the same team.”

Romulus, which entered the tournament ranked No. 2, was able to avoid a letdown after beating No. 1 Detroit Pershing in Tuesday’s Quarterfinal. Now back in a Final, the Eagles will be sure to remain even keeled in preparation for hoisting a championship trophy.

“We’re not that high. We were here last year, so we know what it feels like,” Matthews said. “We’re listening to Oats. He’s leading us. He’s telling us all the right things.”