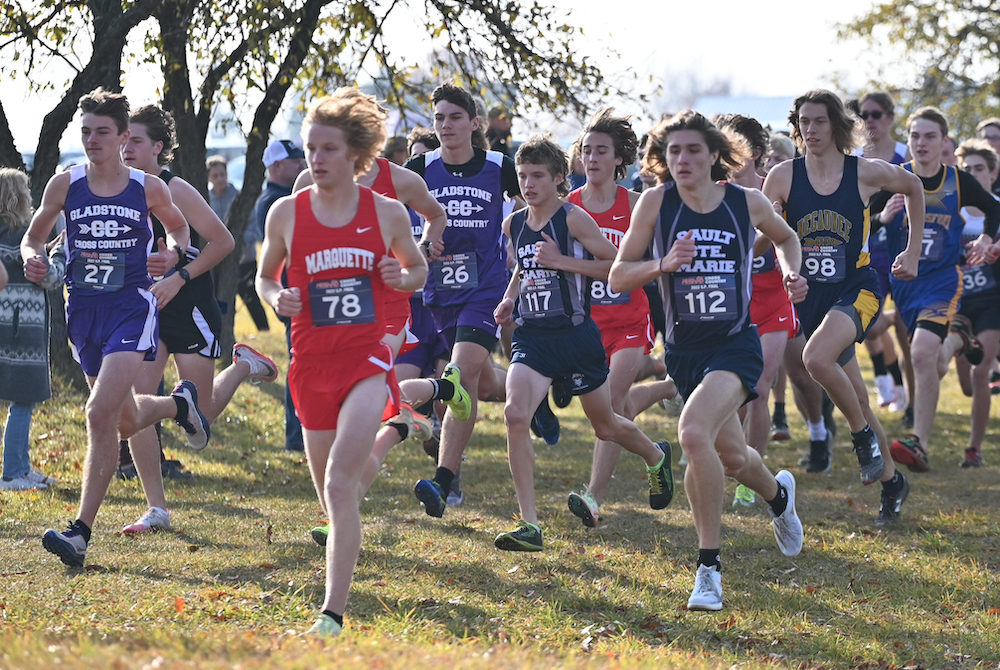 Despite missing a couple of its top runners, Marquette placed five among the top nine and scored 29 points. They were followed by Sault Ste. Marie with 83 and Houghton at 97.

“The guys push one another and Brady Ketzenberger had a great race,” said Marquette coach Derek Marr. “This envisions the concept of being a team. It’s awesome to see how both teams support each other.” 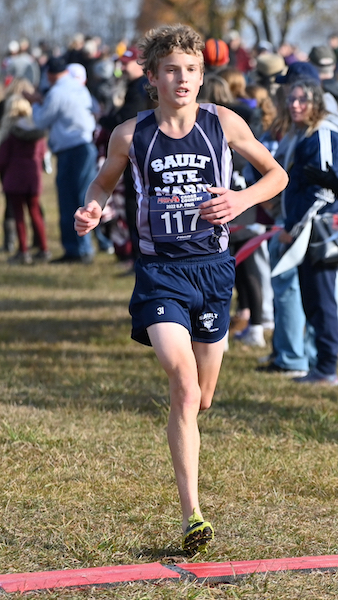 Sault Ste. Marie freshman Gabe Litzner recorded the day’s fastest time, covering the 3.1-mile course in 16 minutes, 41.55 seconds on a sunny and mild day on the Richer farm property, home of the Farmhouse cross country course, near Gladstone. He was followed by Gladstone senior Drew Hughes (16:48.83) and Ketzenberger (16:58.61), also a senior.

“I tried to lay back for two miles, then I tried to reel people after that,” said Litzner, who made his move approximately 400 meters after the two-mile mark. “At that point I felt real good and thought to myself, ‘I have a chance to win this.’ I ran a 16:30 at Rudyard (on Oct. 15) which gave me a lot of confidence. Our team also did real well. I think this will motivate us.”

This marked the first time Hughes broke 17 minutes in a U.P. Final.

“I’m happy with the way everything went,” he said. “I’m glad I got into the 16s. It has been fun running with everybody. I’m happy with how my four years of high school cross country have gone. I set a lot of goals and achieved nearly all of them.”

Painesdale Jeffers grabbed the top three places and retained its Division 2 title with 27 points, followed by Ishpeming with 70 and Ironwood with 78.

“We came in with a real solid game plan and were as ready as we could be,” said Jeffers coach Sam Kilpela. “We really worked on pace in practice and came through exactly where we should be. 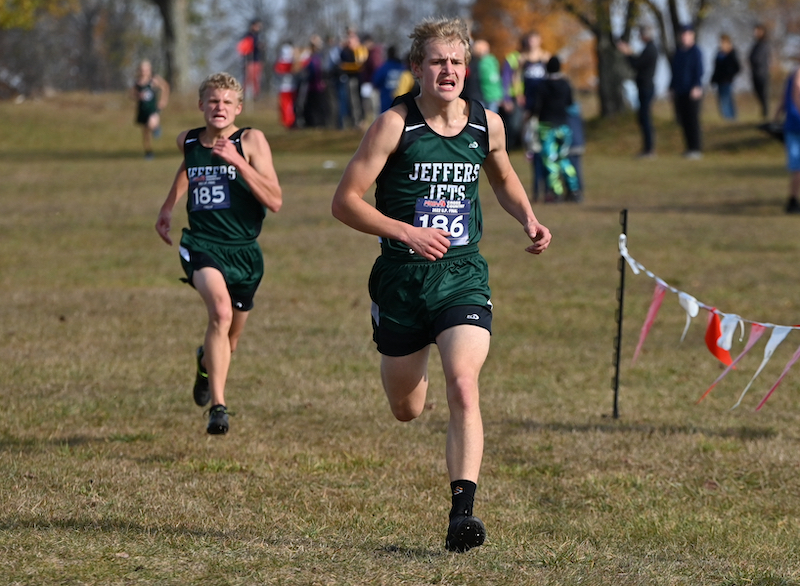 “Going 1-2-3 was unexpected. Brit (Heinonen) had a real bad cramp halfway through the race, but still ran a solid race. This was just a rewarding day. The guys are talented. They work together.”

“This was my best race of the year,” said Tavin. “Once I got into first place (after the first mile), I tried to hold off my brother. Our top four runners always run as a pack, and we’re always within 30 seconds of each other. Our top runner from last year missed this season with a broken leg, but we have two freshmen who are fast. We have a lot of good middle school runners coming up. The future looks bright.”

Ironwood coach Ben Schmandt said he was pleased with his team’s effort.

“We kind of finished where we expected,” he added. “The guys left it all on the course. They worked hard all year long and had a nice finish. We’ll keep working at it. We’ll miss our seniors. Hopefully, we’ll keep working hard and stay in competitive mode.

Stephenson captured the Division 3 crown with its first Finals title since finishing a streak of three straight in Division 2 in 2012. The Eagles were Division 3 runners-up last season. 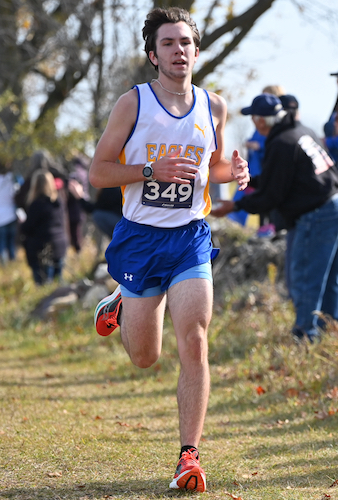 The Eagles scored 77 points and Engadine edged Republic-Michigamme 86-89 for its first runner-up trophy.

“We ran a lot of races with Munising, and they really pushed our boys,” said Eagles coach Kate Kuntze. “I’m really proud of our boys. They performed on a day we really needed them to. In D-3 there’s so many schools without full teams. We couldn’t settle for passing just one runner. The weather was perfect and the boys came in with a good mindset.”

“Getting a lot of sleep and eating healthy were keys in the last two days,” said Norland. “I did 1-K repeats in practice and tried to keep a steady pace today. I got the school record by 21 seconds, which was unexpected for sure. I knew I had a chance, but I thought I’d get it by just a couple seconds.”

Seniors Griffin Brown in fourth and Jacob Ross in ninth set the pace for Stephenson.