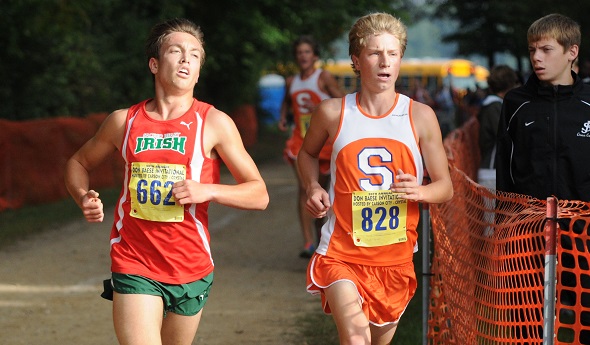 Milford in Division 1 and Concord in Division 4 will look to make it three Lower Peninsula titles in a row while both being paced by the 2012 individual champions in their respective divisions. In fact, another title for Concord would give it 10 total in the sport – second-most all-time.

Here's a look at the competition they’ll face plus other main storylines from all four divisions. For those who can’t make the trip to Brooklyn, MHSAA.TV will provide camera views at the start and finish lines and two more points on the course, with audio from reporters stationed along the way. Cost is $9.95 for Saturday only, which also includes access to all four Lower Peninsula Boys Soccer Finals, or $14.95 for a month pass that will allow fans to also watch live the Volleyball Semifinals and Finals and Lower Peninsula Girls Swimming & Diving Finals.

Click for Saturday's race schedule and links to all qualifiers and the live streams.

Individuals: Kettle’s time of 15:07.3 at last season’s Final ranks sixth all-time for Division 1 championship races. He should get pushed most by Royal Oak junior Ben Hill, 10th last season and a Regional champ in 15:18. Ann Arbor Pioneer senior Costa Willets finished sixth at last season’s Final and won his Regional last week in 15:47.3, and Sims was eighth individually and Robinson ninth at the 2012 Final.

St. Clair graduated four from last season’s championship team, but looks even faster after taking five of the top eight places at its Regional with three runners finishing in 16 minutes or faster. Senior Cody Smith, 15h at last season’s Final, won the Regional in 15:42 followed by senior teammate Trevor Holowaty in 15:47. Second-ranked Grand Rapids Christian similarly dominated its Regional with four among the top eight led by junior champion Benny Briseno – one of three sophomores on the Eagles team that finished eighth at last season’s Final. St. Joseph put six runners among the top 11 in winning its Regional by seven over No. 4 Otsego.

Individuals: All but two of the top 18 from last season’s Final graduated – Mason senior Mason VanDyke (fourth place) is back along with St. Clair’s Smith. Chelsea junior David Trimas (16:02.6) beat VanDyke at their Regional last week, and Algonac sophomore Morgan Beadlescomb (15:48) and Croswell-Lexington senior Andrew O’Connor (15:59) followed the St. Clair runners by breaking 16 minutes at the fastest Regional in the division. Otsego senior Justin Starr also broke 16 minutes to win his Regional in 15:59.7.

Benzie Central has been ranked No. 1 all season on the strength of five runners who keyed the team’s fourth-place finish at last season’s Final. Stockbridge finished ninth last season with five underclassmen, and four of those runners are back this weekend including sophomore Nathaniel Baird, a Regional champ last week. Calvin Christian, Division 3 champ in 2011 and 2010, is fast again despite only two runners back from last season’s third-place team but strong ones in junior Logan Jurgens and sophomore Abe Visser. Lumen Christi finished only second at its Regional and is ranked eighth this week – but does return six of seven runners from last season’s MHSAA championship team.

Individuals: Three runners at last season’s Final posted times among the 10 fastest in Division 3 history. Third-place finisher, Mason County Central senior Chase Barnett, is one of only three from the entire top 10 who didn’t graduate in the spring. Lansing Catholic junior Keenan Rebera was in the mix last season finishing fifth and Kingsley junior Jake Keena will look to improve on his 10th-place finish in 2012. Rebera ran a speedy 15:35.5 to win his Regional, and a number of others also broke 16 minutes at theirs including Kent City senior Will Wilson, Hesperia junior Damien Halverson, Comstock junior Zack Richards and Hillsdale senior Zach Hardway.

Saugatuck is favored to unseat two-time reigning champion Concord atop the standings, but this could be the closest of the day's team finishes. The Indians finished fourth in 2012 and three of those runners are back to lead this weekend’s effort – junior Jacob Pettinga and senior Clayton Springer finished first and second, respectively, at their Regional last week. Concord did graduate three of its top five from last season, but individual champion Jesse Hersha won last year’s race by 20 seconds and should again pace the pack. Sacred Heart certainly is a team on the rise. Its top two last season were juniors, and both are back along with three sophomores who also helped the Irish finish seventh.